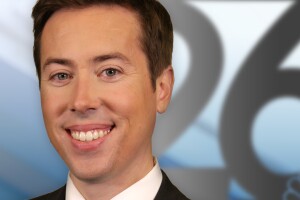 Jon Erickson is an Emmy-winning reporter who joined NBC26 as the co-anchor of NBC26 Live at 10 in May 2017. He comes to Northeast Wisconsin from Phoenix, Arizona.

Jon jumped from the 100th TV market to the 12th TV market in 2014. In Phoenix, Jon obtained records that showed a charter school district did not comply with open meeting laws; district management admitted the mistake and changed their policy. He criss-crossed the state covering wildfires and dust storms. He found that some of the Phoenix area's wealthiest residents had skipped their fire tax payments for years.

Before moving to Phoenix, Jon worked in New Bern, N.C. as a weekend anchor and lead reporter. While in North Carolina, he won two best news writing awards from the Associated Press.

Jon graduated from Michigan State in 2008 with degrees in journalism and finance. He moved to Northeast Wisconsin with his wife.