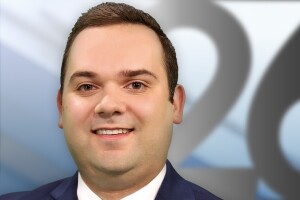 Brandon Kinnard is an award-winning sports reporter who joined the NBC26 sports team in July of 2019. A Northeast Wisconsin native, Brandon has followed the Packers his entire life, and is thrilled to live in his home city and cover the team year-round.

Before joining NBC26, Brandon worked at WAOW-TV in Wausau, where he was the station’s Sports Director from 2015-2018. In his time there, he won three Wisconsin Broadcasters Association Awards for Excellence, including the 2017 first place award for Best Sportscast.

While with WAOW, Brandon covered the Packers closely and also served as a play-by-play voice for the WIAA boys and girls state basketball tournaments. He has also worked as a play-by-play announcer for the BEK Sports Network and several local radio stations.

Brandon is a 2013 graduate of the UW Oshkosh Radio/TV/Film department. He fell in love with sports reporting while covering the Titan football team’s run through the NCAA Tournament in 2012, and still considers himself a diehard UWO fan. #HailTitans

Brandon and his wife, Justine, enjoy spending their time together watching sitcoms, listening to records, and exploring Door County.