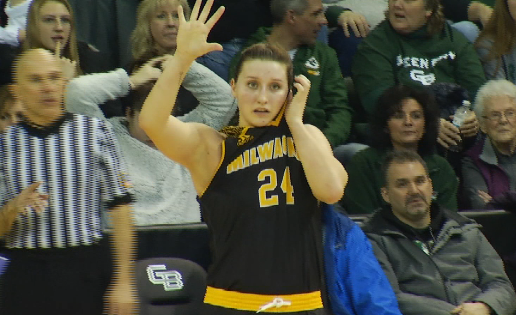 The standout guard - who led the Lightning to back-to-back state championships in 2017 and '18, announced Monday she will transfer to UW-Green Bay from rival UW-Milwaukee.

Levy, a three-point threat, played in 60 games (with 13 starts) over two seasons for the Panthers. She averaged seven points per game last season as a sophomore, including a career-high 27-point performance against Northern Illinois in early December.

Levy shot just 33 percent from three-point range as a sophomore, down 3.5 percent from from her freshman season. View her profile on UW-Milwaukee's website here.

🤩New beginnings start now!! Could not be more excited to be a Phoenix‼️#GreenBayAllDay pic.twitter.com/iW4cmX3b0K

The Phoenix men also landed a key recruit on Sunday. Damontae Taylor, a 6'5" guard from Zion, Ill., gave his verbal commitment to UWGB.

Taylor is a long, lanky and athletic guard with several highlight-reel dunks on his ledger. Scouts also believe his length gives him the ability to develop into a very good defender at the college level.

“I can do everything: score, defend, get my teammates going,” Taylor told the Chicago Tribune back in January. “I’m really good at going to the hole and good at drawing two people to me.”

Both players can make their commitments official on April 15, when the national signing period re-opens.