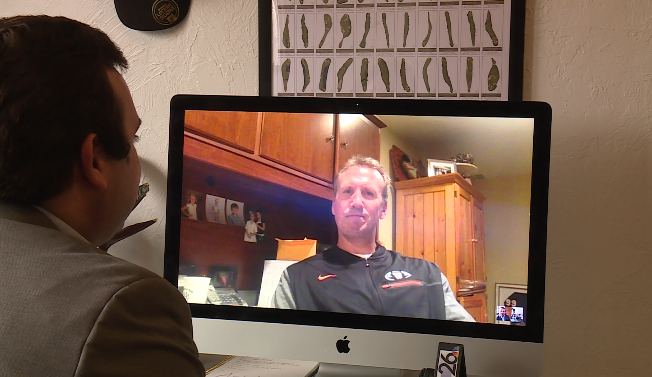 DE PERE, Wis. (NBC 26) -- When the West De Pere head football coaching position opened back in January, Chris Greisen wasn't sure it was for him.

"I didn't know if I wanted it at first but I just decided to throw my name in the hat," the Sturgeon Bay native and former professional quarterback said.

But after meeting with the school's leaders, he was hooked.

"You knew the support was there," he said. "Plus they had the tradition and the culture of winning and the kids willing to work to do great things."

West De Pere went 107-16 over the past decade, winning state titles in 2010 and '11. Greisen said that history and not "having to build from the ground up" was a big factor in his decision.

He does plan to put his "own stamp" on the program - particularly, fans may see more passing. Greisen said a "ground and pound" attack will be harder to sustain as the Phantoms move into the Fox River Classic Conference next season.

As a former quarterback, he knows how important the passing attack can be - but he believes balance is key as well.

"We're going to have to be multiple and be good teachers," he said. "I like to throw it around a little bit. It's not going to be spread/air raid. But we are going to be a good mix of run and pass."

Greisen emphasized that his players will "have fun" - which he believes is ultimately what his job is all about.

"This is a game," he said. "And frankly it's not about getting these kids to play in the National Football League even though I do believe in that dream. I was able to do it.

"But most of these kids are not going to do that. But they are going to become husbands and dads some day. And that's what we want to ultimately train them to be. Great husbands and great fathers."

Greisen graduated from Sturgeon Bay High School in 2004. He won an NCAA Division II National Championship with Northwest Missouri State in 1998 and played four NFL seasons with the Arizona Cardinals and Dallas Cowboys. He also had a decorated career in the Arena Football League.

Since retiring from professional football in 2011, he has spent most of the last decade as a teacher and assistant coach at local schools - including the last four as an assistant at Freedom.