More unrest, marches across Wisconsin in reaction to George Floyd 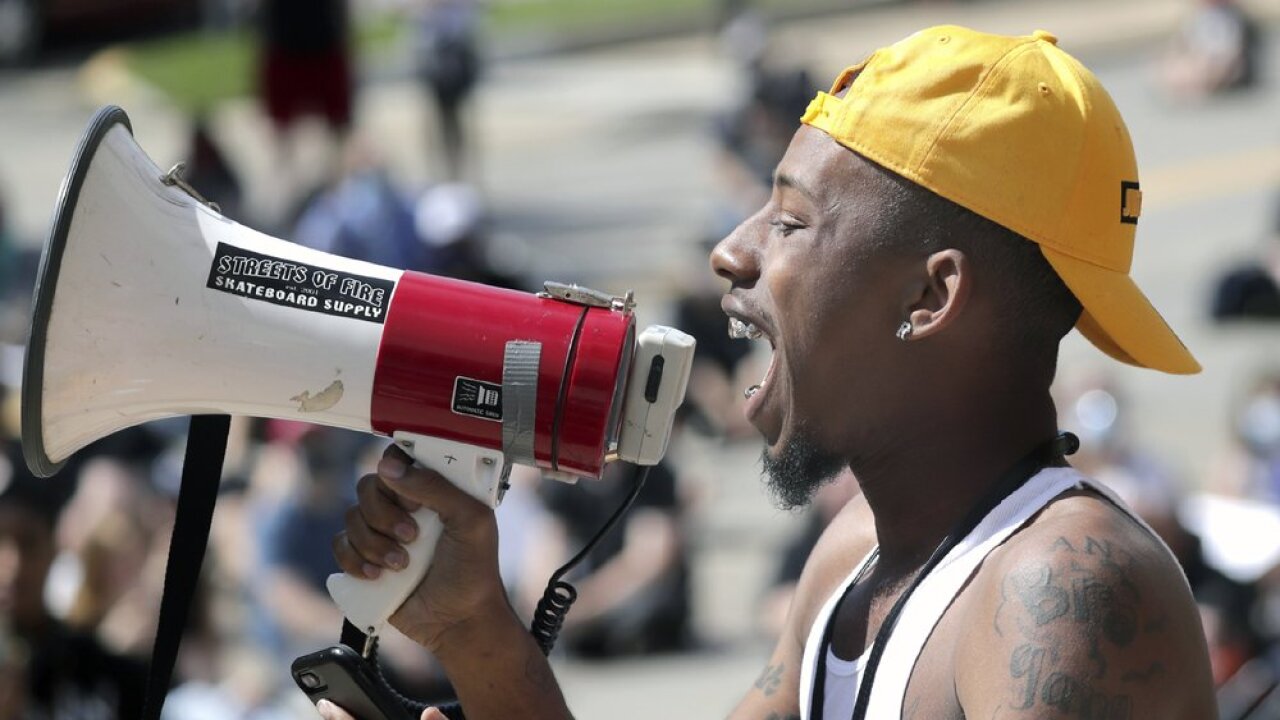 Ray Wright, Milwaukee, Wis., speaks to protesters during a Black Lives Matter march and rally Sunday, May 31, 2020, in Oshkosh, Wis. Protests continue across the country over the death of George Floyd, a black man who died after being restrained by Minneapolis police officers on May 25. (William Glasheen/The Post-Crescent via AP)

MADISON, Wis. (AP) — Protests resumed across Wisconsin for a third straight day Monday, with marchers stopping traffic in downtown Madison after a night of violence in the capital city that resulted in 15 arrests, more damages to businesses and the spraying of tear gas by police.

Like in many places across the country, Wisconsin demonstrations over the death of George Floyd have been mostly peaceful. But there has been vandalism and confrontations with police, continuing a weekend of unrest both in the state and across the country in reaction to Floyd’s death.

Volunteers in Milwaukee and Madison also took to the streets on Monday, as they had on Sunday, to clean up damage from the night before.

On Sunday night in Racine, someone set fire to a community policing building named after civil rights leader Thelma Orr. About 150 people marched to the police station where they threw rocks at police who were wearing riot gear. The crowd dispersed after police fired tear gas.

Madison police reported Monday that multiple stores were broken into Sunday night in the State Street area, a business corridor that connects the state Capitol to the University of Wisconsin campus. On Saturday night, about 75 businesses were damaged. Police said multiple fires were set and several officers were injured by rocks and other projectiles that were thrown at them.

The Wisconsin Capitol building was also vandalized over the weekend, with graffiti sprayed on a door and a window to Rep. David Steffen’s first-floor office broken. The window, like many others in downtown Madison, was boarded up on Monday.

Also on Monday, protesters marched in the Milwaukee suburb of Waukesha and once again in Madison, this time blocking traffic on a busy six-lane street that feeds into downtown. Chanting insults at police, “Whose streets? Our streets!” and “Black lives matter!” the protesters had traffic at a standstill.

One of the 15 people arrested Sunday night in Madison was armed with a handgun, police said. There were multiple unsuccessful attempts to steal a police squad car, the police said. On Saturday night, a police car was stolen and set ablaze. A protest Sunday night in Milwaukee was mostly peaceful, but a crowd that gathered outside of a city police station was dispersed with tear gas.

National Guard troops were deployed in both Madison and Milwaukee to assist local law enforcement. Both cities were operating under curfews designed to reduce the number of people on the street.

Madison police said there were several hundred people in the crowd Sunday night. A peaceful protest on Saturday drew more than 1,000 people, before a group of about 150 later that night turned violent.

Floyd, who was black and handcuffed, died May 25 after a white Minneapolis police officer used his knee to pin Floyd to the ground for several minutes while Floyd pleaded for air and eventually stopped moving. The officer was charged with third-degree murder and manslaughter on Friday. He and the other three officers who were arresting Floyd were fired on Tuesday. None of the other officers have been charged.