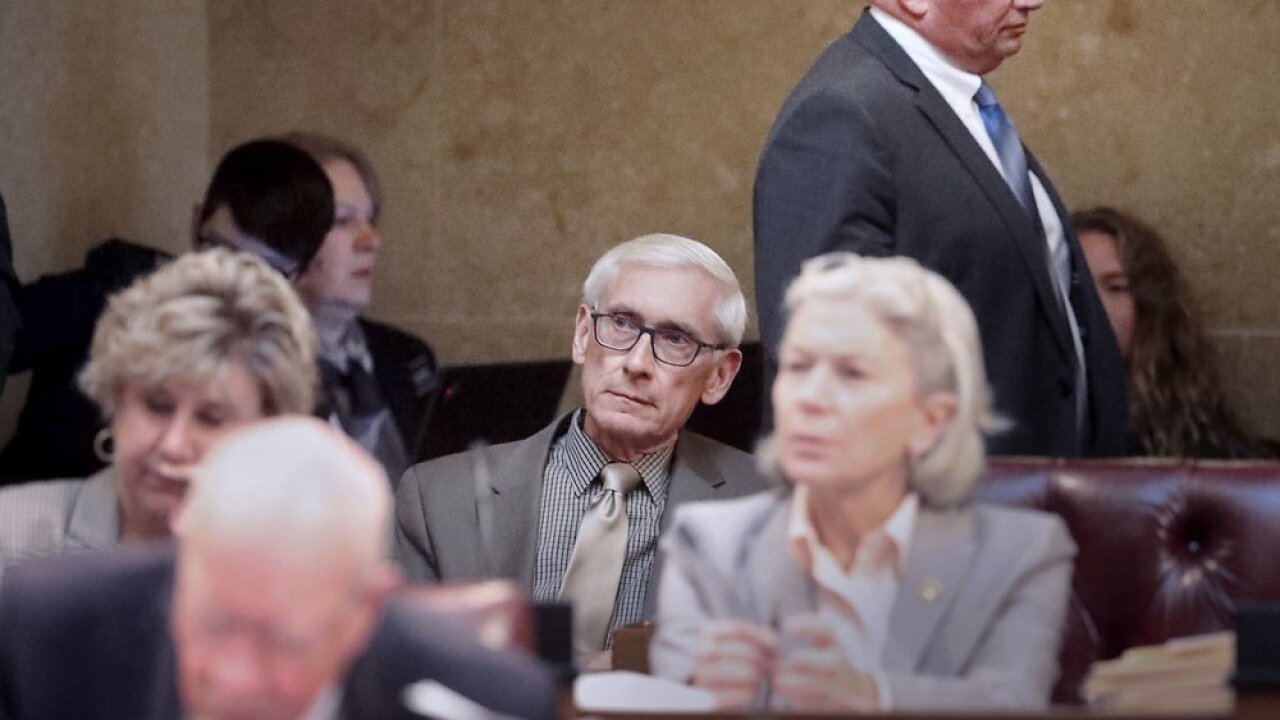 Wisconsin Gov. Tony Evers, seated at center, listens to a Senate debate regarding his pick to head the Department of Agriculture, Trade, and Consumer Protection during a session at the Wisconsin State Capitol in Madison, Wis. Tuesday, Nov. 5, 2019. Walking behind during the proceedings is Senate Majority Leader Scott Fitzgerald, R-Juneau. (John Hart/Wisconsin State Journal via AP)

MADISON, Wis. (AP) — Wisconsin Democratic Gov. Tony Evers was so angered when Republican state senators fired his agriculture secretary last week that after he vented to reporters in the state Capitol, he told state workers the move was “amoral and stupid” and urged them not to let the “bastards” impede their work.

Evers’ comments are further fueling discord with Republican lawmakers who control the Legislature. The Senate last week voted along party lines to reject confirmation of Brad Pfaff, Evers’ agriculture secretary, the first time a Cabinet secretary has been fired by the Senate since at least 1987.

Evers took the unusual step of attending the Senate debate in person. And afterward, he vented to reporters in the hallway of the Capitol in comments sprinkled with four-letter words. He called the move “absolute (expletive).”

He then met with employees at the Department of Agriculture, Trade and Consumer Protection. Cheryl Daniels, an attorney for the agency, tweeted that Evers told them, “We can’t let the bastards keep us from doing our good work.” The Milwaukee Journal Sentinel first reported the comments Wednesday.

Evers’ spokeswoman, Melissa Baldauff, said the comment was meant as a turn of phrase, not as a direct attack on the GOP legislators. Evers also referred to the vote as “amoral and stupid,” according to the Daniels tweet.

The Evers comments come after he campaigned on the promise to bring more civility and respect to politics.

“We’ve gotten away from who we are and the values that make Wisconsin great — not Republican or Democratic values, but our Wisconsin values of kindness and respect, empathy and compassion, and integrity and civility,” Evers said in his inaugural address. He said in an interview with The Associated Press in January that he wanted his tenure as governor to focus on “civility, finding common ground, giving people hope for the future. The idea that we have to we have to work together, put people before politics. Old fashioned stuff, but that’s me.”

“These attacks are shockingly disrespectful toward Senate Republicans — it’s no wonder Evers hasn’t been able to accomplish anything in divided government,” Fitzgerald said. “The governor should immediately make clear if he stands behind his closed-door remarks and thinks that members of my caucus are ‘bastards.’”

Evers and Republicans have been able to get little work done.

Evers was to sign a bill into law Wednesday that would be just the 21st he had signed in his more than 10 months in office. He has vetoed seven bills, which puts him on track to have the highest veto rate of any governor in Wisconsin history, according to the Legislative Reference Bureau.

Evers is also on pace to sign far fewer bills into law than previous governors who had to deal with a divided government.

In eight years as governor, Republican Scott Walker signed an average of 179 bills a year. The last time there was divided government, in the 2007-2008 session, Democratic Gov. Jim Doyle signed 242 bills into law when Republicans controlled one chamber of the Legislature. The session before that, Doyle signed 491 bills into law even though Republicans controlled both the Senate and Assembly.

After Pfaff got fired by the Senate last week, Evers hired him at a salary of nearly $121,000 to work as the director of business and rural development at the state Department of Administration. He promoted the deputy agriculture secretary into the leadership post.

More confirmation fights may be coming next year when the Senate returns. Several other Evers’ Cabinet secretaries have yet to be confirmed, and Fitzgerald warned last week that some of them could be in jeopardy.