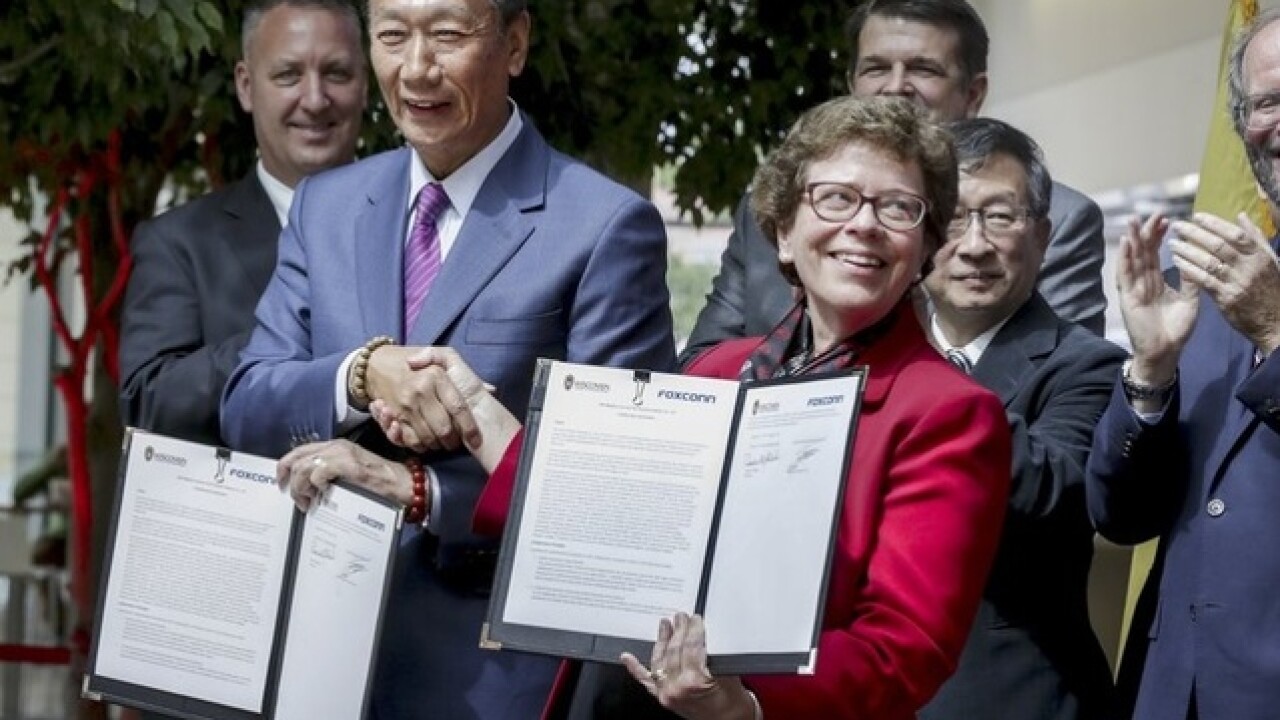 Copyright 2018 Scripps Media, Inc. All rights reserved. This material may not be published, broadcast, rewritten, or redistributed.
<p>Foxconn CEO Terry Gou, left, and UW-Madison Chancellor Rebecca Blank after signing a Declaration of Collaboration agreement Monday Aug. 27, 2018 at the Wisconsin Institute for Discovery on the UW-Madison campus. Foxconn Technology Group announced Monday, that it will invest $100 million in engineering and innovation research at the University of Wisconsin-Madison. (Steve Apps/Wisconsin State Journal via AP)</p>

MADISON, Wis. (AP) — Foxconn Technology Group announced Monday that it will invest $100 million in engineering and innovation research at the University of Wisconsin-Madison, which is one of the largest gifts in the school’s history and comes as the Taiwan-based electronics giant builds its first North American factory in southeastern Wisconsin.

Foxconn CEO Terry Gou and UW-Madison Chancellor Rebecca Blank signed an agreement that also calls for the creation of a science and technology institute on the UW-Madison campus that will collaborate closely with the plant, which is being built in Mount Pleasant, about 100 miles (160 kilometers) southeast of Madison near the Illinois border.

Foxconn, the world’s leading electronics manufacturer, chose Wisconsin for its first plant outside of Asia after receiving generous incentives from the state. Foxconn says the plant could cost up to $10 billion and eventually employ 13,000 people.

Finding those workers was expected to be a challenge in a state with low unemployment. The deal announced Monday would provide a conduit of potential interns and employees from the state’s largest university to the Foxconn plant.

The Foxconn Institute for Research in Science and Technology, which will be created under the agreements, will be a hub for technological innovation and provide an environment for research and development initiatives in medical science, materials science, computer and data-driven science.

The institute’s main location will be at the Foxconn manufacturing campus in Racine County, but it will also have a presence in Madison.

The university said the agreements formalize its commitment to being a part of research with Foxconn, while Foxconn will assist with research, recruiting and creating job opportunities.

Blank said the $100 million deal is the largest industry research partnership in the university’s history. UW-Madison also plans to raise $100 million under the agreement.

Foxconn has also announced plans to open its North American office headquarters in Milwaukee and technology centers that could employ hundreds in Eau Claire and Green Bay. Gov. Scott Walker has praised those investments outside of Racine County, where the 22 million-square-foot manufacturing campus is being built, saying it shows the positive statewide economic impact of the project.

State and local government incentives for the main Foxconn project in Racine County could top $4 billion, mostly in cash payments from the state. That price tag, the largest in U.S. history for a foreign corporation, has drawn criticism from Democratic opponents of Walker, who negotiated the deal. Walker faces Democrat Tony Evers, who has vowed to renegotiate the deal, in the November election.

Wisconsin voters appear torn on the value of the Foxconn project. In a Marquette University Law School poll last week, 44 percent of registered voters said the state is paying more than the plant is worth. A majority, 61 percent, said they felt the plant would substantially improve the Milwaukee-area economy, but an equal percentage said businesses where they live will not directly benefit.