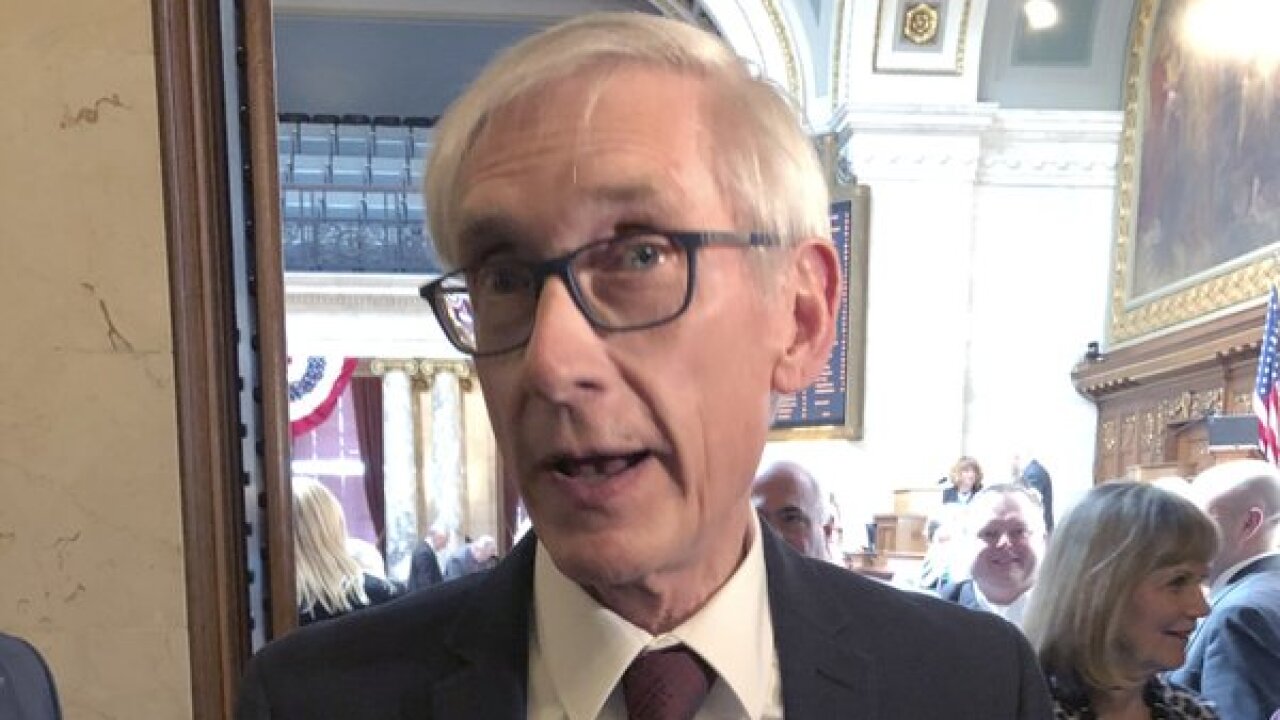 Wisconsin Gov. Tony Evers tells reporters that the Republican Senate leader is &quot;huffing and puffing&quot; for saying confirmation of Evers&#39; Cabinet secretaries is in jeopardy because of an ongoing legal fight over a lame-duck legislative session on Tuesday, April 9, 2019, in Madison, Wisconsin. (AP Photo/Scott Bauer)

MADISON, Wis. (AP) — A Wisconsin appeals court sided with Democratic Gov. Tony Evers on Tuesday, ruling that he had the authority to withdraw appointments that had been approved by Republicans and then-Gov. Scott Walker during a lame-duck legislative session.

The state’s 3rd District Court of Appeals said Evers’ action was not invalidated by a later court ruling that put on hold the decision that allowed him to rescind the appointments. Republican Senate Majority Leader Scott Fitzgerald promised an immediate appeal to the Wisconsin Supreme Court, which is controlled 4-3 by conservatives.

“As the governor has repeatedly said, he acted properly and within the law to withdraw those improper appointments and make his own valid appointments,” Evers’ spokeswoman Melissa Baldauff said in reaction to the ruling.

Hours before the ruling came out, Fitzgerald said that Republicans were “pretty wild” with anger over Evers’ decision to revoke the appointments and may not vote on confirming his Cabinet secretaries while the court battle continues.

The position by the Senate’s top Republican highlighted the deep divide between Republicans who control the Legislature and the newly elected governor. The Senate has not acted to confirm any of Evers’ Cabinet picks while courts settle legal issues stemming from a lame-duck session in which Republicans pushed through several measures weakening the powers of Evers and Democratic Attorney General Josh Kaul.

“I think some of those Cabinet members are going to be in trouble,” Fitzgerald said, declining to name those who may be in greater jeopardy than others.

Evers said he did not see Fitzgerald’s comments as retribution over the lame-duck legal fight, but rather “huffing and puffing.”

Evers’ Cabinet secretaries are working while their confirmations by the Senate are pending. If they are rejected, they would have to quit working.

The fight goes back to the lame-duck session Republicans called for December, after Evers had defeated Walker but before he took office. Republicans approved 82 Walker appointments, in addition to passing a number of power-stripping laws.

Evers rescinded all of those appointments last month after a court invalidated actions during the lame-duck session as unconstitutional. He re-appointed all but 15 of them. Days later, an appeals court put that ruling on hold, creating more confusion about the status of the 15 people Evers did not reappoint.

Evers argues the posts are vacant while Republicans say they should be allowed to return to work.

The 3rd District Court of Appeals on Tuesday said Evers was valid in voiding the appointments, noting that the order granting a stay “does not explicitly direct the governor to allow them to continue in their positions.”

However, it said if a court ultimately rules the original appointments were constitutional, Evers’ withdrawal of them could be voided.

Those who were not reappointed include Public Service Commissioner Ellen Nowak and University of Wisconsin Regent Scott Beightol. The Evers’ administration denied Nowak access to her building when she tried to return to work. The Regents took a different approach, allowing Beightol and student Regent Torrey Tiedeman to attend the board’s meeting last week.

Fitzgerald said Tuesday that some senators were ready to reject some of Evers Cabinet appointments in reaction to his decision to rescind the appointments.

“All I can tell you is people are upset,” Fitzgerald said.

Republicans were particularly angry with Nowak being denied entrance to the PSC building, he said. She is former secretary of the Department of Administration and well-known to Republican lawmakers, many of whom are personal friends with her, Fitzgerald said.

He said that Nowak was given the “bum’s rush.”

Fitzgerald spoke to reporters in his office after Democratic Senate Minority Leader Jennifer Shilling accused Republicans of not taking action on Evers’ Cabinet picks as payback over the lawsuits related to the lame-duck session.

Fitzgerald quickly adjourned the Senate session after Shilling spoke, denying other senators the customary time to speak about whatever topic they wish.