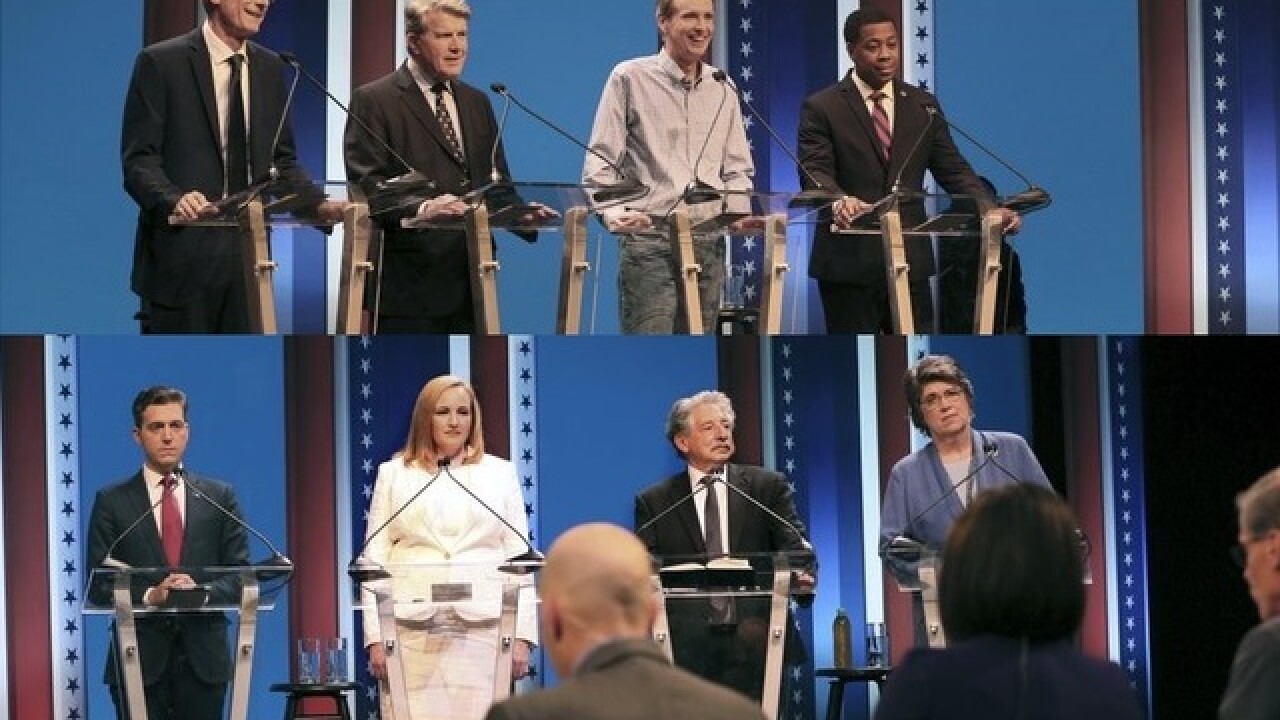 Copyright 2018 Scripps Media, Inc. All rights reserved. This material may not be published, broadcast, rewritten, or redistributed.
<p>Photos of candidates cropped from Michael Sears/Milwaukee Journal-Sentinel via AP, File.</p>

The eight Democrats running for governor in Wisconsin have largely kept their focus on Republican Gov. Scott Walker ahead of Tuesday’s primary, while Walker has repeatedly warned his supporters of a possible “blue wave.”

Walker, who is seeking his third term as governor after an unsuccessful bid for president in 2016, has built a big financial advantage and run more than a dozen television ads touting his record of the past eight years. The Democratic Governors Association, fearful that whoever emerges from the primary will be broke, has been working to shore up money and other support for Tuesday’s winner.

The Wisconsin Republican Party accused the Democrats of engaging in a “dangerous race to the left” in an attempt to beat Walker, whose only GOP challenger, Robert Meyer, did not actively campaign.

The Democratic front-runner, state schools Superintendent Tony Evers, had a double-digit lead in a July poll by Marquette University Law School, but more than a third of respondents were undecided.

Evers was the only candidate to have won statewide office before. In his third term as state superintendent, he focused his campaign on Walker, arguing that he has failed public schools while diverting funding to expand private school vouchers. Republicans portrayed Evers as a bureaucrat who wasn’t aggressive enough in revoking licenses from teachers accused of wrongdoing in the classroom.

The other candidates are state Sen. Kathleen Vinehout, political activist Mike McCabe and corporate attorney Josh Pade, none of whom ever seemed to get traction among donors or in the polls.

Roys made a splash with a March campaign video showing her breastfeeding her newborn daughter. She made abortion rights a focus of her campaign and would be the state’s first woman governor if elected. She received the endorsement of U.S. Sen. Kirsten Gillibrand of New York.

Mitchell is a Madison firefighter who ran as the lieutenant governor candidate in a failed attempt to recall Walker in 2012. He was backed by labor unions and would be the state’s first black governor. Mitchell said in a television ad that he would “fight against racism and division.” He was endorsed by U.S. Sen. Kamala Harris of California.

Both Roys, 39, and Mitchell, 41, argue it’s time for the younger generation to have a voice in Democratic politics — a jab at the 66-year-old Evers.

Flynn resisted bipartisan calls to drop out over his work as attorney for the Milwaukee Archdiocese when it was fighting priest abuse claims in the 1990s. Flynn focused his campaign on opposition to the Foxconn project.

Soglin, 73, is the oldest candidate and has been mayor of the capital city off and on since 1973, for a total of 22 years. He ran an ad portraying Walker as a puppet controlled by Trump.