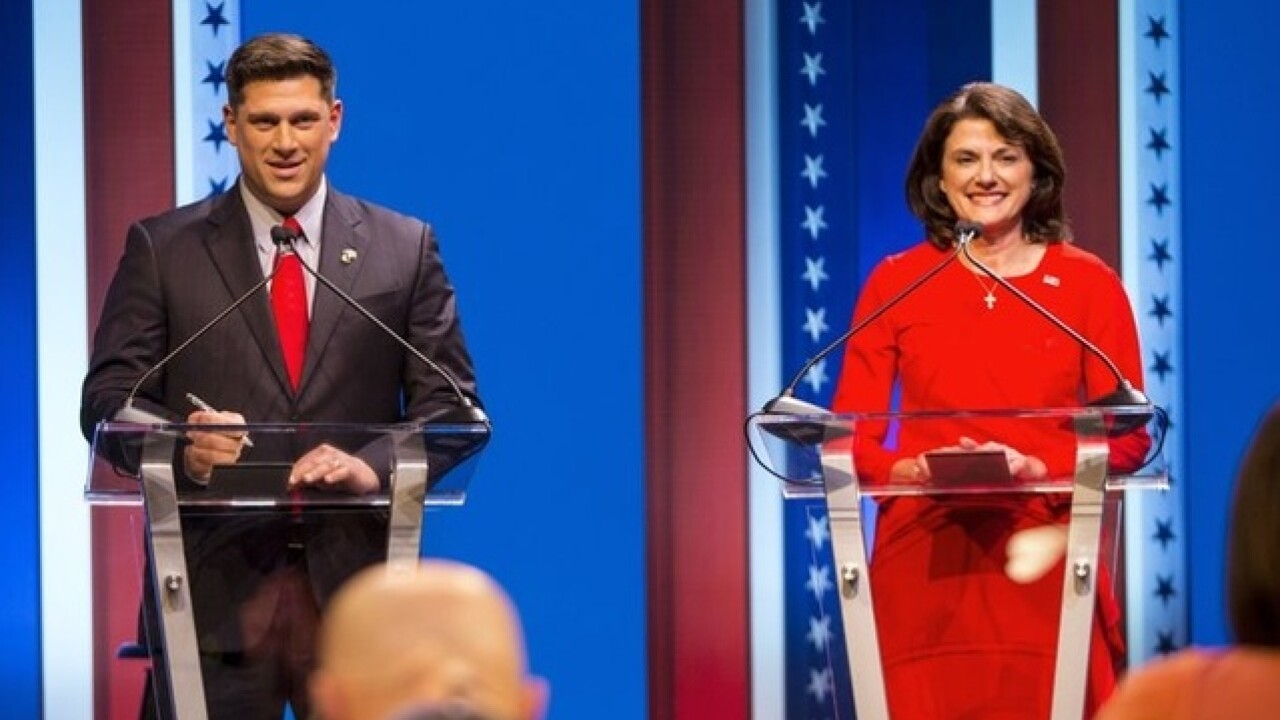 Copyright 2018 The Associated Press. All rights reserved.
<p>FILE - In this July 26, 2018, file photo, Republican U.S. Senate candidates Leah Vukmir, right, and Kevin Nicholson debate in Milwaukee. Nicholson, running as an outsider, is running against Vukmir, a 15-year veteran of the Legislature who had the state GOP endorsement. The Republican primary battle for a Wisconsin U.S. Senate seat pits two loyalists to President Donald Trump who agree on most of the issues. (Tyger Williams/Milwaukee Journal-Sentinel via AP, File)</p>

The Republican primary battle for a Wisconsin U.S. Senate seat pits two loyalists to President Donald Trump who agree on most of the issues.

The winner of Tuesday’s primary between Kevin Nicholson and state Sen. Leah Vukmir will face Democratic Sen. Tammy Baldwin in November. Republicans nationally have targeted Baldwin, the only Democrat in a statewide office of importance in Wisconsin, and outside groups have already spent millions on television ads attacking her.

Polls showed the Nicholson-Vukmir race to be very close, with about a third of Republican voters undecided.

Nicholson, 40, is a former Democrat who ran as a political outsider, arguing that it will take someone with his life experience and willingness to confront the GOP establishment to work well with Trump. He promised not to serve more than two terms.

Nicholson said his experience serving as a combat Marine in Afghanistan and Iraq, together with working as a management consultant in the private sector, helped to persuade him to become a Republican. His parents’ backing of Baldwin proves his conversion was real, Nicholson argued.

Vukmir, a 60-year-old retired nurse, is a 15-year state lawmaker and ally of Republican Gov. Scott Walker. She argues that she’s the proven conservative, based on her long record voting for a host of GOP priorities, including Walker’s anti-union law and limits on abortions.

Vukmir won the Republican Party endorsement in May and since then was endorsed by a host of high-profile state officeholders and U.S. House Speaker Paul Ryan. Walker officially stayed out of the race, but his son works for Vukmir and his wife held a fundraiser for her.

Both Nicholson and Vukmir oppose abortion, pledged not to raise taxes, want to repeal the federal health care law passed under President Barack Obama and support Trump’s building of a border wall with Mexico.

With Vukmir and Nicholson largely agreeing on the biggest issues, the race came down to their backgrounds, style, approach to the job and loyalty to Trump. Neither Nicholson nor Vukmir initially supported Trump in 2016, but both got behind him in the general election. Trump did not endorse either of them in the primary.

Two weeks before the election, video of Vukmir badmouthing Trump in 2016 re-emerged and became fodder for TV ads attacking her loyalty to the president. Vukmir, who initially supported three others for president before lining up behind Trump, has insisted she’s an ardent backer now.

Two GOP megadonors — Vukmir backer Diane Hendricks and Nicholson supporter Richard Uihlein — have scheduled a unity fundraiser just days after the primary, a strong signal that Republicans plan to unite behind the winner.