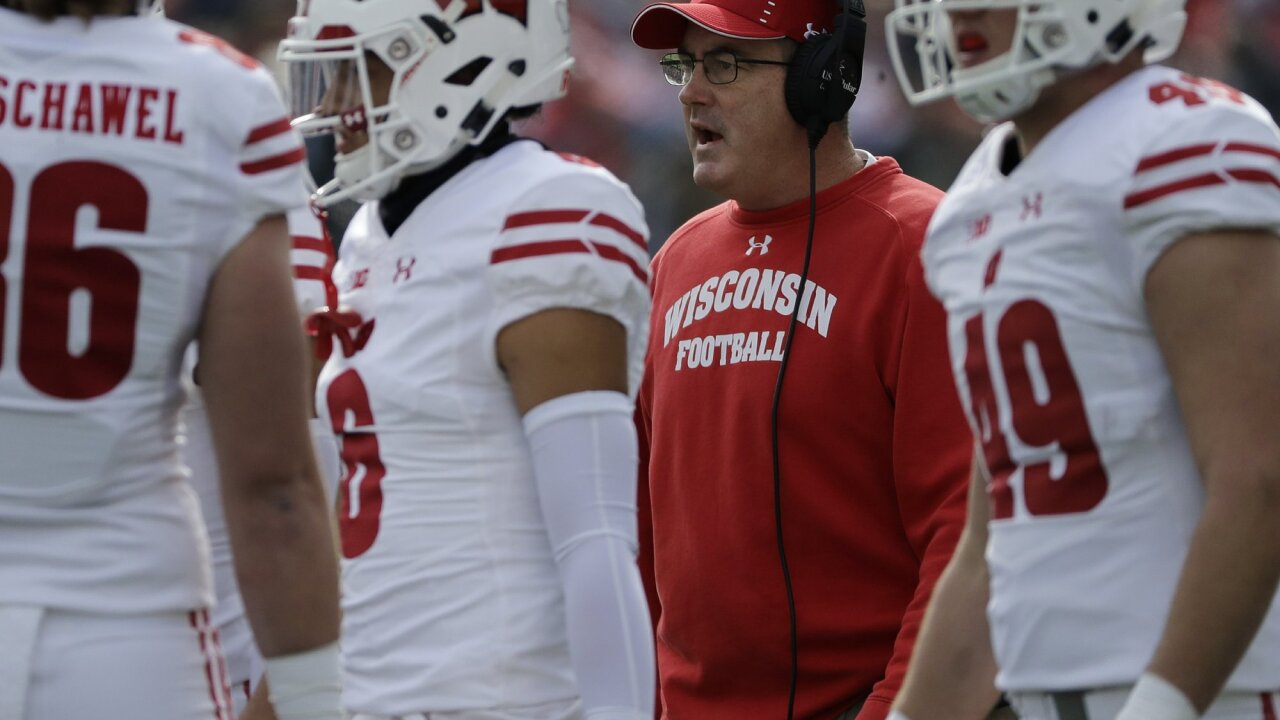 AP Photo/Nam Y. Huh, File
File-This Oct. 27, 2018, file photo shows Wisconsin head coach Paul Chryst talking to his team against Northwestern during the first half of an NCAA college football game in Evanston, Ill. Wisconsin and Miami followed much of the same dreary path that started in the warmth of the Orange Bowl and ends with a frigid thud at Yankee Stadium. The Badgers and Hurricanes were both AP Top 25 teams when they played last season in the Orange Bowl, a 34-24 win for No. 6 Wisconsin in a game that seemed to serve as a preview for a better 2018 ahead for both programs. (AP Photo/Nam Y. Huh, File)

ANAHEIM, Calif. (AP) — Oregon and Wisconsin are taking contrasting approaches to everything that comes before the Rose Bowl.

Ducks coach Mario Cristobal is treating this week as a business trip, making sure players got a workout in after arriving in Los Angeles on Christmas Day.

Badgers coach Paul Chryst trusts his players can maintain balance between enjoying the activities before the game, including a visit to Disneyland on Thursday and the annual Beef Bowl dinner at Lawry’s The Prime Rib, and preparing for “The Granddaddy of Them All.”

Despite the divergent approaches, both No. 7 Oregon and No. 11 Wisconsin expect to be at their best when they meet on New Year’s Day.

“Yes, we earned the opportunity for all these events, to come to Disney and to go to the Beef Bowl and do things like that, but we really earned ourselves an opportunity to play another game, so that’s really what we’re here to do,” Badgers linebacker Zack Baun said.

For Oregon (11-2), there is a sense of urgency to keep building on what they have accomplished in Cristobal’s second season as head coach. Defensive tackle Jordon Scott described the 37-15 win over No. 12 Utah in the Pac-12 championship game as their most complete game of the season, but still believes the Ducks can play even better.

Cristobal followed up Oregon’s first conference title since with 2014 with another strong recruiting class this month and said there is still “meat on the bone” headed into signing day in February.

A win in the Rose Bowl would confirm that Oregon is reestablishing itself as the top program in the Pac-12, ending the decade in the same position it held at the start.

“I believe in momentum,” Cristobal said. “Momentum is probably the biggest monster in college football. I think when you watch college football versus pro football, those NFL guys can kind of put a foot in the ground and stop momentum and get it back the other way. In college, it’s almost the inertia effect. It just keeps going until, you know, something really dramatic happens to go the other way. So, yeah, I think anything regarding a bowl, an opportunity postseason-wise is always an opportunity to build tremendous momentum.”

Wisconsin (10-3) will be playing in the Rose Bowl for the fifth time in 10 years, and Baun said it remains the program’s measuring stick for success.

“When you’re kind of recruited to Wisconsin, they show you the history and what the Rose Bowl means with Wisconsin,” Baun said. “It’s all over the walls, you see it everywhere. You hear stories about the Beef Bowl and what not, but to be here and to have the opportunity is really something special to this team.”

Chryst will be coaching in a New Year’s Six bowl for the third time in the past four seasons, but he views the Rose Bowl as carrying more weight than previous trips to the Orange Bowl and Cotton Bowl.

“Especially in Coach Alvarez’s era and the way that the bowls were set up, you know, the Rose Bowl was the pinnacle. And it still feels that way, right,” Chryst said.

The game also resonates with players for both teams. Wisconsin running back Jonathan Taylor was in awe when Stanford’s Christian McCaffrey had a 75-yard catch-and-run for a touchdown on the first play from scrimmage in 2016. Quarterback Justin Herbert, a native of Eugene, Oregon, still remembers running back De’Anthony Thomas ripping off a 91-yard touchdown run when the Ducks and Badgers met in the 2012 Rose Bowl.

It finally struck Herbert on Wednesday that he will be playing on the same stage as the likes of Thomas and quarterback Marcus Mariota, Oregon’s only Heisman Trophy winner.

“I think one of the best moments was getting off the plane and seeing all the buses with roses on the side. I think that’s when it was real, and you saw Oregon on the side, that was really cool,” Herbert said. “It’s still so surreal and such a great opportunity for us to go play some football. It doesn’t get any better than this and we’re so excited.”

NOTES: Chryst and Cristobal said all players for their teams made the trip and are eligible. … Ducks WR Mycah Pittman has practiced for the past three weeks after missing three games because of a broken arm he sustained against Arizona on Nov. 16. “Well, Pittman right now, we’ll get final word here in the next day or two but all signs point to him being cleared and ready to go,” Cristobal said.