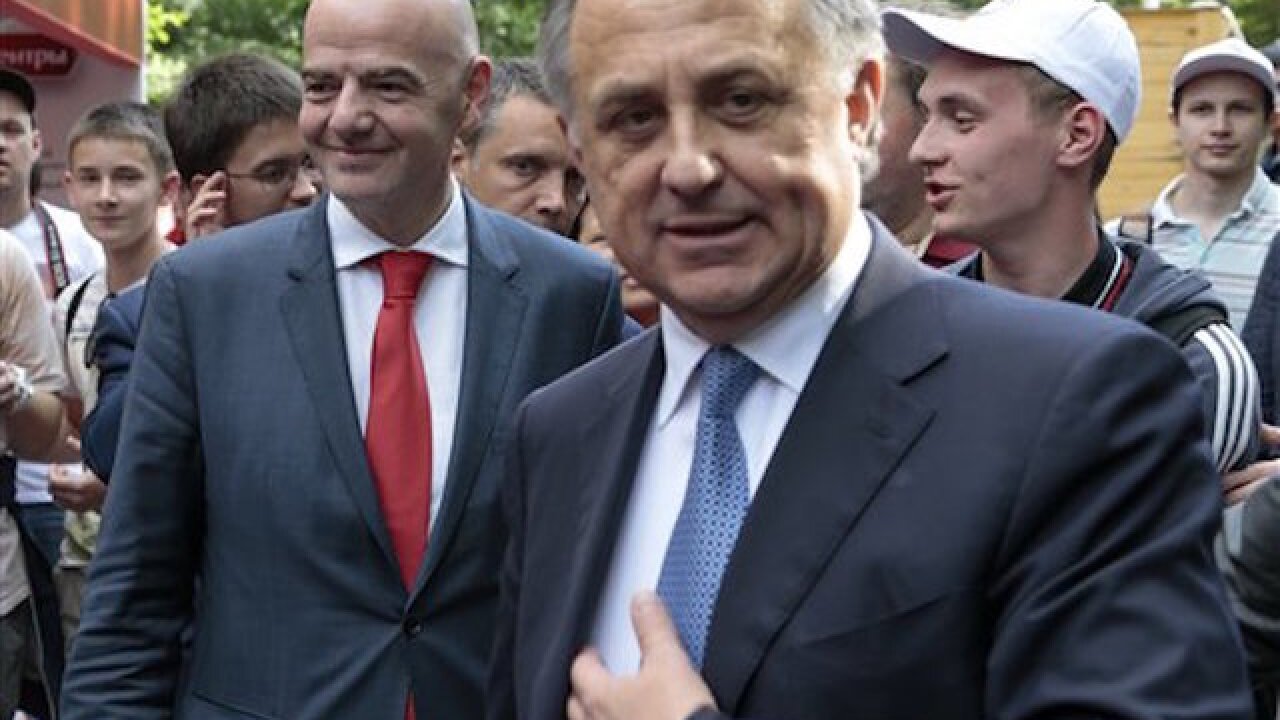 MOSCOW (AP) — Russian Sports Minister Vitaly Mutko on Thursday denied allegations in a German documentary that he intervened to conceal a soccer player's positive drug test, dismissing the report as "laughable" and "implausible."

The documentary, aired Wednesday night by German broadcaster ARD, showed what it said were Mutko's initials on a document as proof that the minister helped to cover up a positive test of an unidentified player of the Krasnodar soccer team.

"The initials could be somebody else's," Mutko said in comments carried by the Tass news agency. "Thousands of people use me as a reference. How can I help somebody to cover up something? Destroy it myself? This is laughable and implausible."

Mutko argued the documentary could have been aimed to show that Russia's anti-doping efforts "were not genuine." It came at a time when Russia is hoping the IAAF will lift its suspension of Russia's track and field athletes in time to compete in the Olympics in Rio de Janeiro.

Mutko blamed the accusations on Grigory Rodchenkov, the former head of the Moscow drug-testing lab now living in Los Angeles who revealed details of Russian doping in an interview with the New York Times last month. Rodchenkov said he personally switched tainted urine samples for clean ones at the doping lab used for the 2014 Sochi Winter Games, with help from people he believed to be officers of the Russian security services.

"He has one target — me," Mutko said of Rodchenkov. "I can feel in all of his interviews that he hates me. This is a targeted attack on Russia, calculated and well-organized. Mr. Rodchenkov is working for the people who gave him shelter."

Dmitry Peskov, the spokesman for President Vladimir Putin, indicated Wednesday that the Kremlin treats the ARD allegations as libel and stands by Mutko.

The ARD documentary also said it was told by an athlete that the disgraced coach of Russia's race walkers, Viktor Chegin, who has been banned for life, was seen directing athletes secretly in Adler, near Sochi.

Mutko said Thursday that Chegin has been fired but he did not rule out that somebody may have approached the coach informally.

"Chegin does not coach," Mutko said. "He's a specialist with a wealth of experience. He had thousands of students. Someone may be calling him, but he is not officially employed."

On Wednesday, Mutko said he wanted all retested doping samples from the 2008 and 2012 Olympics to be thrown out because of alleged flaws in the reanalysis process.

The IOC has reported 55 positive findings in retesting of stored samples from the 2008 Beijing Games and 2012 London Olympics. The Russian Olympic Committee has said 22 of the cases involved Russian athletes, including medalists.

Russian officials said two of the athletes were cleared when their "B'' samples tested negative, contradicting the positive "A'' samples. Mutko said those two cases were enough justification for the entire retesting program to be scrapped.