Wagner is the first Green Bay-area player to win the award since former major leaguer Jason Berken did so in 2002. 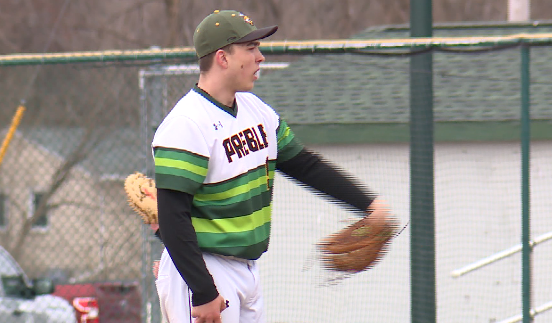 GREEN BAY, Wis. (NBC 26) -- In a perfect world, Preble baseball would be gearing up for its fourth consecutive trip to the state tournament right now.

After three straight trips to Appleton - without a championship to show for it - star pitcher/infielder Max Wagner feels this season would have been different.

"This team... I don't think it was like our last three teams that I've been on," Wagner said. "I really do believe that we had a shot at going, and hopefully winning it."

Instead, the Hornets are wondering "what if?" But, even without the chance to play, Wagner is getting some closure on his career. Last week, he was named the state's Gatorade Player of the Year - the first Green Bay-area player win that award since West De Pere's Jason Berken in 2002.

Since the season was canceled, this year's award was based off of last year's results.

"It was kind of strange and weird because I kind of wanted to prove that I deserve the award," he said. "But just all the hard work that my family and I have put in has finally paid off."

And it paid off in more ways than one. Soon, Wagner will head down to South Carolina where he'll attend Clemson on a baseball scholarship. That next step draws closer - their first virtual team meeting was last week.

Wagner said the main point of the meeting was to talk with the Tigers' strength coordinator.

"Usually we're working out with them in the summer but now we've got to do it on our own," he said. "So they want to make sure that we're doing the right stuff to get ready for the season."

Wagner was supposed to make the move to Clemson in mid-June. Because of the pandemic, that has been pushed back to early August.

After pitching and playing shortstop in high school, he said he projects to play on the left side of the infield at Clemson.