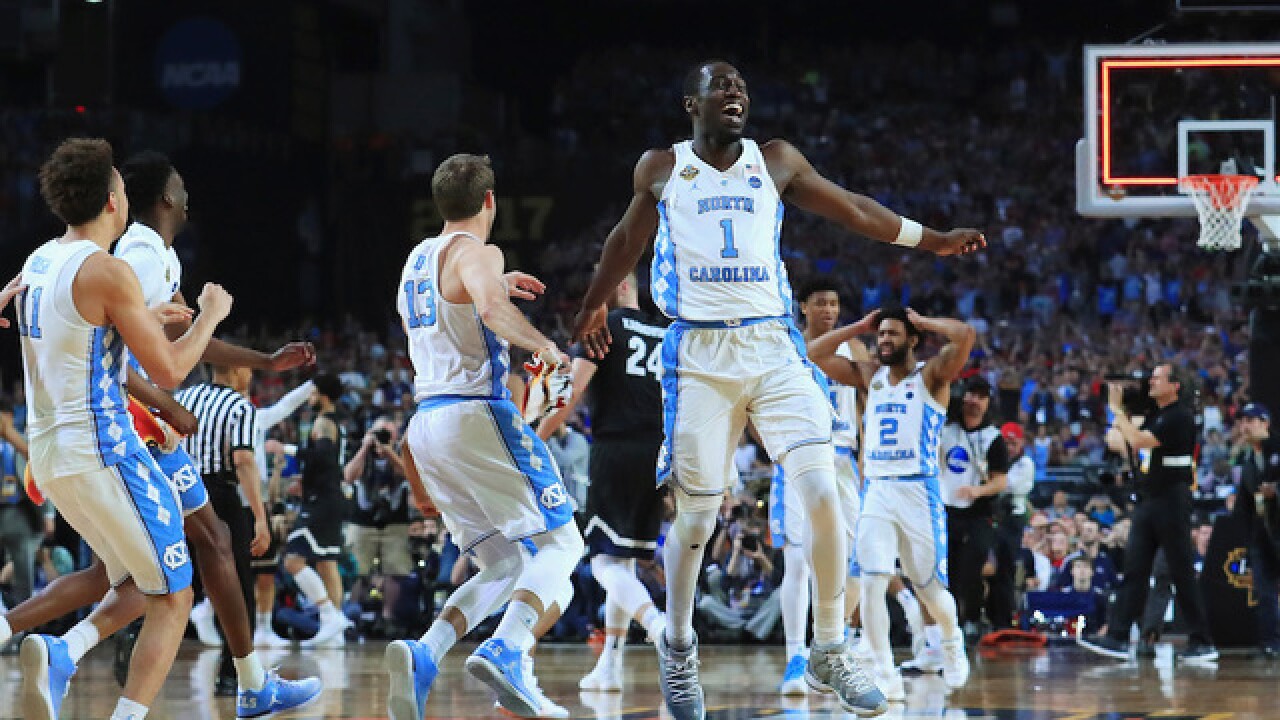 There will be no heartbreak for the North Carolina Tar Heels this time.

A year after losing on the first buzzer-beating three in NCAA men's basketball championship history, the Tar Heels are back on top, defeating Gonzaga 71-65 at University of Phoenix Stadium in Glendale, Arizona, in front of a crowd of 76,168. It's UNC's sixth title and first since 2009.

"At the end, when you're watching your kids jump around, and the excitement and thrill they have, there's no better feeling in the world as a coach," Williams said.

In 2016 in Houston, UNC lost in a thriller, succumbing to Villanova on that last-second three-pointer by Kris Jenkins. But the Tar Heels (33-7) didn't let that scenario shape up on Monday against Gonzaga (37-2), who was in the national championship game for the first time.

In the opening minutes of the second half, UNC went on an 8-0 run to take a 40-35 lead. Gonzaga stormed right back with an 8-0 run of its own to make it 43-40 with 14:34 left. From there, as the teams continued to trade points, the officials couldn't stop blowing the whistle. There were 27 fouls called in the second half, compared to 17 in the first.

"It was a slugfest out there," Gonzaga head coach Mark Few said. "It's two teams that desperately wanted to be crowned national champion. And I think to be so close for us is a temporarily crushing blow right now. But I'm hoping and knowing that perspective will come with time."

The final push came from UNC. An Isaiah Hicks jumper gave the Tar Heels a 68-65 lead with 27 seconds to go. A Kennedy Meeks block and a timely rebound by Joel Berry II set up the fast break, which led to a Justin Jackson dunk. That made it 70-65. With no timeouts, Gonzaga was finished.

"When Kennedy blocked that shot and I grabbed the ball and threw it to Justin, I immediately almost started crying," Berry said.

Gonzaga, a Roman Catholic university in Spokane, Washington, emerged as a Cinderella team in 1999, reaching the Elite Eight before losing to eventual champion Connecticut. The Bulldogs have been a mainstay in the NCAA tournament since.

This year's run by Gonzaga was no fluke, with its only other defeat coming February 25 to BYU. For their efforts, the Bulldogs earned the No. 1 seed for the West region for the NCAA tournament. This was the Bulldogs' first Final Four appearance.

"I mean, how many teams would take 37-2, league champs, national runner-up?" Gonzaga senior guard Jordan Matthews said. "We broke that glass ceiling everybody said we couldn't get over. Everybody was saying how the Zags couldn't get to the Final Four. So we did that.

"It started in '99 when they went to the Elite Eight and we just kept -- the Zags keep breaking that ceiling. I have no doubt in the future, there will be future Zags that get over this hump."

But the night belonged to the No. 1 seed from the South region, UNC.

"It's just an unbelievable feeling," Berry said. "It's what we've worked for. The ups and downs that we've had, it's all worth it. I can't even describe my feeling right now, but I'm just glad that I was able to do something with this team because I felt like, just the personality and what we went through, and I think we just deserved it."