Which Game of Thrones characters would each Packer be?

Let's face it, the two greatest things about Sunday's are Packers football and Game of Thrones.

With training camp set to start on Thursday, July 27, we thought it would be fun to compare the two. Here are some of our favorite Game of Thrones characters if they were Packers.

Just like Hodor, Evans will be charged with holding off the enemies on the offensive line. With T.J. Lang now in Detroit, Evans brings a veteran presence to the trenches. He's a six-time Pro-Bowler and a former Super Bowl champion. Hodor never let the White Walkers get to Bran. Here is to hoping Evans doesn't let the defense get to Aaron Rodgers! 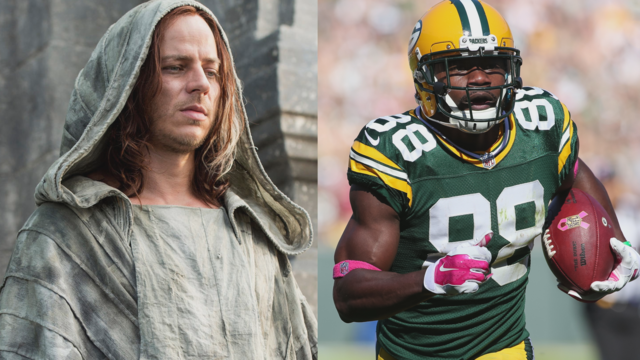 A man has many talents. H'ghar has the ability to change his face at will. Wide receiver turned running back, Ty Montgomery has the ability to change his position. He has proven himself to coach McCarthy in the backfield but still presents an option as a wide receiver should Aaron Rodgers so chose. He does what is best for the team. "Valar Dohaeris. All men must serve."

The Targaryens were blessed with long golden locks of hair, as was Clay Matthews. Daenerys is a conqueror who loves to sack a city, almost as much as Matthews loved to sack quarterbacks, especially if your name is Jay Cutler . Can you imagine if he had three dragons by his side too?

Risen from the dead to become the King of the North, Jon Snow seems nearly unbreakable. So too did Jordy Nelson after returning from a season-ending ACL injury in 2015 only to lead the Packers in receptions (97), yards (1,257) and touchdowns (14) in 2016.  Will Jon Snow one day sit on the Iron Throne? Will Jordy Nelson once again hoist the Lombardi trophy? We know nothing.

While the rest of Westeros clashes with swords and spears and fire and ice, Lord Baelish lurks in the shadows as possibly the most dangerous man in the realm. While the kicking game is often overlooked, Mason Crosby might just be the most dangerous man on the Packers roster He proved that last year in the playoffs against the Cowboys when Crosby hit two field goals from greater than 50 yards, including the game winner. Since a down year in 2012, Crosby's field goal percentage has been consistently in the 80's. "Knowledge is power."

We don't really have a good reason why Drogo would make a good Bakhtiari other than they kind of look alike. Give that man a horse and some eye shadow and he basically is Kahl Drogo.

"We take what is ours." The Greyjoy’s have no problem taking what they want as part of their conquests, and neither does Ha Ha Clinton-Dix. Clinton-Dix took the ball away from opposing teams five times last year and lead the Packers in interceptions. Euron Greyjoy is feared at sea. Clinton-Dix is feared on the gridiron. "What is dead may never die!" 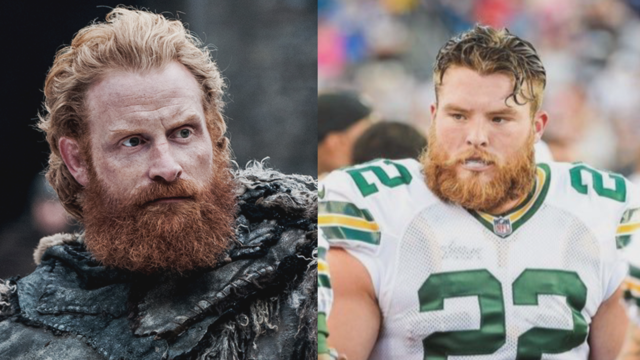 Another look-alike. The only man who can grow a red beard as thick and stunning as Tormund is Aaron Ripkowski. The third-year fullback is climbing the offensive ranks with the same determination that Tormund used to climb The Wall. All four of Ripkowski’s touchdowns scored last season came from week 12 on. Number 22’s third season could be his best yet. No word yet on how Ripkowski feels about Lady Brienne.

Don't let the size difference fool you. 6'6" Bennett is more like 4'5" Tyrion than you think. They both traded in their allegiance for the greater good. Tyrion left Kings Landing and joined Daenery's across the Narrow Sea. Bennett left New England and joined the Packers in the Frozen Tundra. Tyrion's knowledge of the Lanister's could be instrumental in his new role, just as Bennett's knowledge of a Super Bowl championship team won't hurt in Green Bay either.

The Night King as Aaron Rodgers

They both have ice in their veins! The Night King marches his army south, destroying anything in his way. Number 12 marches his team through opponents with the same regard. If you thought Aaron Rodgers was a veteran at 33 years old, sprouting gray beard hairs in his 13th NFL season, that’s nothing compared to the 12,000-year-old Night King! "Winter is coming." And when it does, both the Night King and Aaron Rodgers will rule.