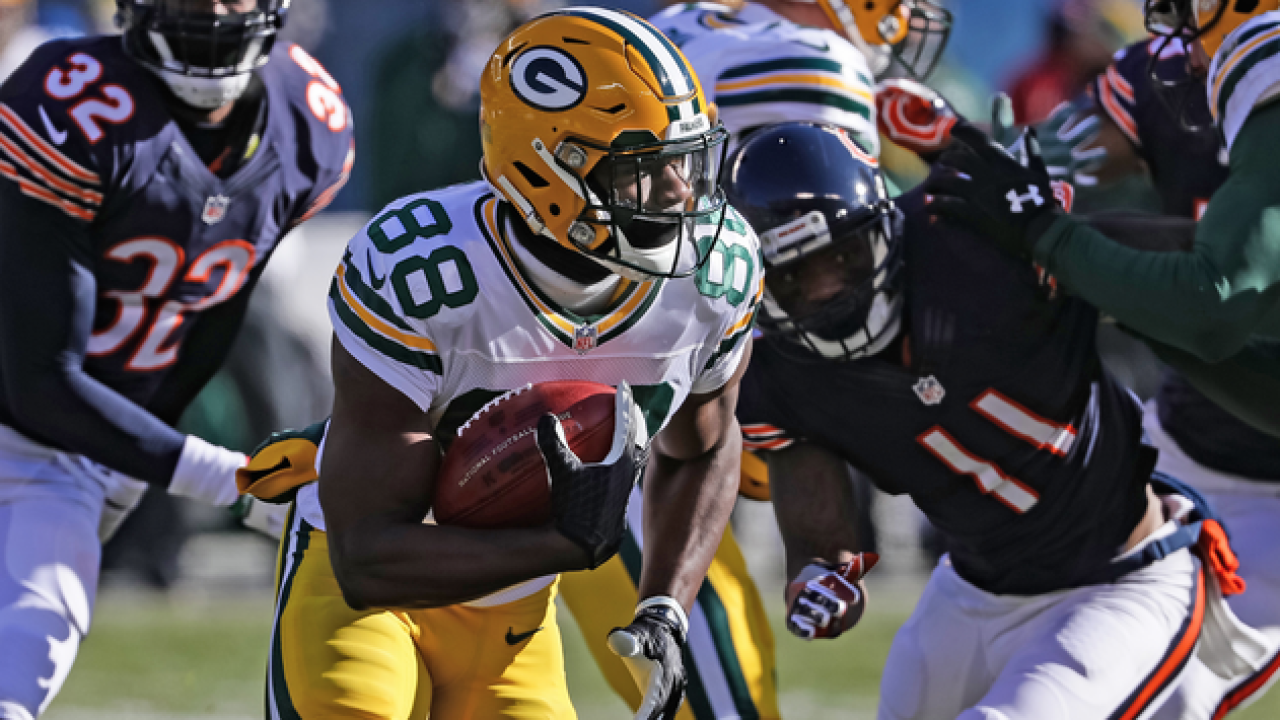 CHICAGO (AP) — Aaron Rodgers hit Jordy Nelson with a 60-yard pass to set up Mason Crosby's 32-yard field goal as time expired to lift the Green Bay Packers to a 30-27 victory over the Bears in one of the coldest games ever played in Chicago on Sunday afternoon.

Wide receiver-turned-running back Ty Montgomery ran for a career-high 162 yards and two touchdowns, and the Packers (8-6) earned their fourth straight victory despite blowing a 17-point lead in the fourth quarter.

They also moved ahead of Minnesota for sole possession of second place in the NFC North and pulled within a game of division leader Detroit, with the Vikings getting pounded by Indianapolis and the Lions losing to the New York Giants.

The Bears (3-11) had tied it on a field goal by Connor Barth with 1:19 left. The Packers took over at their 27, and on third down at the 26, Rodgers unleashed a deep pass down the middle of the field to Nelson, who got behind Cre'Von LeBlanc.

With no timeouts, the Packers downed the ball before Crosby booted his winner.

The game-time temperature for their matchup against Green Bay on Sunday was 11 degrees with a minus-4 wind chill.

Green Bay, of course, played the coldest NFL game on record when it beat Dallas in the 1967 NFL championship game — the "Ice Bowl."

Rodgers threw for 252 yards despite problems his left hamstring and right calf that kept him out of practice during the week.

Montgomery had several big runs, including a 61-yarder, after coach Mike McCarthy announced he is now a full-time running back. He also scored from the 4 on the game's opening possession and added a 3-yard TD in the third quarter that made it 20-10.

Christine Michael ran for a 42-yard touchdown. Julius Peppers had a strip-sack that led to a field goal. Ha Ha Clinton-Dix added two interceptions, and the Packers tied the NFL's oldest rivalry for the first time since 1933 at 94-94-6.

Chicago's Matt Barkley threw for 362 yards and two touchdowns, but was picked off three times.

Alshon Jeffery came on strong near the end to finish with 89 yards on six catches in his return from a four-game suspension for violating the NFL's policy against performance-enhancing drugs.

The Packers as though they were on their way to an easy win after that huge third quarter. But the Bears came storming back.

An 8-yard touchdown catch by Jeffery and 9-yard run by Jordan Howard midway through the fourth cut it to 27-24.

The Bears took over on their 21 with 5:42 remaining and had a third down at the Packers 4 when Micah Hyde reached in front of Meredith at the goal line, forcing Chicago to settle for Barth's tying field goal.

Packers: RB James Starks sat out because of a concussion. McCarthy said the veteran running back was in a car crash Monday.

Bears: NT Eddie Goldman was inactive after leaving last week's game at Detroit because of an ankle injury. ... LB Jerrell Freeman served the final game of a four-game suspension for a PED violation.