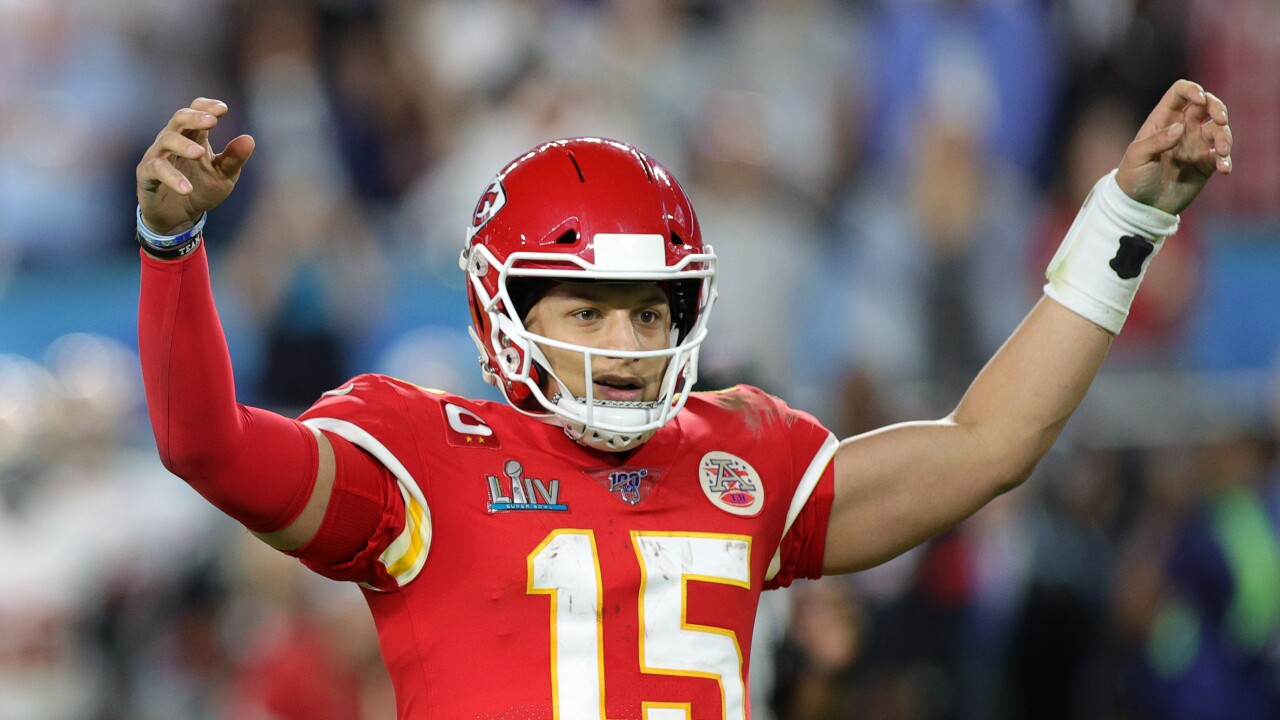 Patrick Mahomes threw two touchdown passes in the fourth quarter to give Kansas City the lead, and Damien Williams iced the game with a 38-yard touchdown run inside of two minutes.

Mahomes, 24, becomes the second-youngest quarterback to win a Super Bowl after Ben Roethlisberger, who was 23 when he led the Pittsburgh Steelers to a win in Super Bowl XL.

61-year-old Andy Reid wins his first Super Bowl as a head coach in his 21st season as an NFL head coach.

Just like that, the Kansas City Chiefs have taken the lead in Super Bowl 54.

Williams is a former member of the Miami Dolphins, and now has a go-ahead score in the Super Bowl in his former home stadium. The play to the right pylon held up after a lengthy replay review.

The Chiefs have been masters of comebacks throughout this postseason, erasing double-digit deficits to beat Houston and Tennessee.

And now they’re on the cusp of doing it again for a Super Bowl title.

The Chiefs are about to get the ball back in Super Bowl 54, down by just three.

San Francisco went three-and-out on the possession following Patrick Mahomes’ touchdown pass to Travis Kelce. The 49ers’ drive took only about a minute off the clock.

Patrick Mahomes and the Kansas City Chiefs are not done yet in Super Bowl 54.

Mahomes connected with Travis Kelce for a 1-yard touchdown pass with 6:13 left, pulling the Chiefs within 20-17 of the San Francisco 49ers. The score snapped a run of 17 unanswered points by the 49ers.

Facing third-and-15 from his own 35 with about 7 minutes left, Mahomes spun away from heavy pressure and heaved the ball toward Tyreek Hill for what became a 44-yard gain down to the San Francisco 21 and essentially kept the Chiefs’ hopes alive.

They got some help on the next third down. Mahomes’ pass on third-and-10 toward Kelce in the end zone led to the 49ers getting flagged for pass interference. On the next snap, Mahomes and Kelce connected for the 1-yard touchdown pass.

In terms of official numbers, that is the second-lowest attendance in the game’s history behind only Super Bowl 1 — which drew 61,946 fans and didn’t even sell out.

Sunday’s game at Hard Rock Stadium was a sellout, though was much lower than the 74,059 who came to the game the last time it was at the Miami Dolphins’ home stadium in Miami Gardens, Florida.

Dolphins owner Stephen Ross spent more than $500 million refurbishing and remodeling the stadium since, and one of the things he did was lower the capacity considerably.

San Francisco is in control, and Kansas City’s Patrick Mahomes has been intercepted for the second time this half.

Mahomes’ giveaway with 11:57 left in the game ended a drive where the Chiefs were in position to get at least three points and cut into San Francisco’s 20-10 lead.

But on third-and-6 from the 49ers’ 23, the Chiefs simply couldn’t deliver. Mahomes’ pass was thrown a tiny bit behind Tyreek Hill, who couldn’t secure the catch. The ball bounced off his hands and landed in the arms of San Francisco’s Tarvarius Moore, who returned it seven yards to the 49ers’ 20.

The 49ers cashed in on Patrick Mahomes’ interception.

Raheem Mostert went in from a yard out, and San Francisco took a 20-10 lead over Kansas City with 2:35 left in the third quarter.

The 49ers needed just under three minutes to go 55 yards in six plays, with Jimmy Garoppolo connecting with Kendrick Bourne on a big 11-yard gain while facing 3rd-and-eight to keep things going.

On the next snap, he turned it over anyway.

Mahomes was picked off by San Francisco’s Fred Warner with 5:23 left in the third quarter, giving the 49ers the ball back with a three-point lead.

Mahomes had the ball knocked loose by Nick Bosa for a nine-yard loss on the preceding snap, then tried to force a ball on third-and-12 and wound up throwing it right to Warner.

Robbie Gould connected again on the opening drive of the third quarter, and San Francisco has jumped out to a 13-10 lead over Kansas City.

The 49ers took the second-half kickoff and went 60 yards in nine plays, chewing up 5:31 of clock. Gould hit from 42 yards out.

Meanwhile, there were no shortage of reactions to the Super Bowl halftime show starring Shakira and Jennifer Lopez.

Reigning NBA MVP Giannis Antetokounmpo of the Milwaukee Bucks said the show “almost got me in trouble.” Florida Sen. Rick Scott tweeted that he thought Pitbull should have been part of the show — “America was robbed” — he said.

The 49ers have outgained the Chiefs 177-155 and seemed poised to take the lead when Jimmy Garoppolo connected with tight end George Kittle on a 42-yard play that would have gotten San Francisco inside the Kansas City 15 with 6 seconds left.

But Kittle was called for offensive pass interference to nullify the big play, the 49ers took a knee on the ensuing snap to run out the clock, and off to halftime they went.

This is the first time the Super Bowl was tied at the half since 2015, when Seattle and New England went into the break knotted at 14.

Chiefs quarterback Patrick Mahomes is 12 for 18 passing for 104 yards. Garoppolo is 9 for 11 for 89 yards and the game’s lone passing touchdown.

Tom Brady ran a Super Bowl trick play without putting on a uniform.

The 42-year-old longtime Patriots quarterback can become an unrestricted free agent for the first time in his career when his contract ends in March, and he gave New England a fright in a commercial during the first half of Sunday’s game.

“They say all good things must come to an end, that the best just know when to walk away,” Brady said in the ad, walking through an empty football stadium and hinting at a possible retirement.

Brady says he has a major announcement, the music cuts out — and then he reveals he’s reading a script for Hulu.

Jimmy Garoppolo connected with Kyle Juszczyk on a 15-yard touchdown pass with 5:05 left in the first half, and Super Bowl 54 between San Francisco and Kansas City is tied at 10-10.

Garoppolo is now 8 for 10 for 69 yards and a score. He had been picked off on San Francisco’s preceding drive, which strangely means good things are going to happen: He’s now 39 for 42 for 461 yards with three touchdowns and zero interceptions this season in the drive immediately following an interception.

The scoreboard inside Hard Rock Stadium briefly said San Francisco 13, Kansas City 10 after that touchdown. It was corrected after a few moments.

Another fourth-and-1 call by Chiefs coach Andy Reid has paid off.

Harrison Butker’s 31-yard field goal with 9:32 left in the first half was good, and Kansas City has pushed its lead over San Francisco to 10-3.

Damien Williams got three yards on fourth-and-1 from the San Francisco 19 to keep the drive going.

A woman has apparently tried to get onto the field at Super Bowl 54.

Security personnel stopped the woman’s bid during the first quarter. An Associated Press photographer captured images of the woman being tackled by security before she made it onto the playing surface.

It was not immediately clear if the woman would be facing charges.

The Chiefs took a risk and wound up with a touchdown.

After Damien Williams got four yards on fourth-and-1 from the San Francisco 5, quarterback Patrick Mahomes ran it in for the game’s first TD with 31 seconds left in the opening quarter as Kansas City took a 7-3 lead over the 49ers in the Super Bowl.

The Chiefs were stuffed on first and goal, and then Mahomes went to his right before finding a crease and getting into the end zone.

49ers safety Jimmie Ward was shaken up on a third-down play where Mahomes scrambled near the right sideline and came close to picking up a first down. Ward came in at full speed to dislodge the ball from Mahomes’ hands and it caromed out of bounds, but he remained down for about a minute after making the big hit.

The 49ers have struck first in Super Bowl 54.

Robbie Gould kicked a 38-yard field goal with 7:57 left in the opening quarter, and San Francisco has taken a quick 3-0 lead over Kansas City.

The Chiefs have now given up the first score in all three of their playoff games this season.