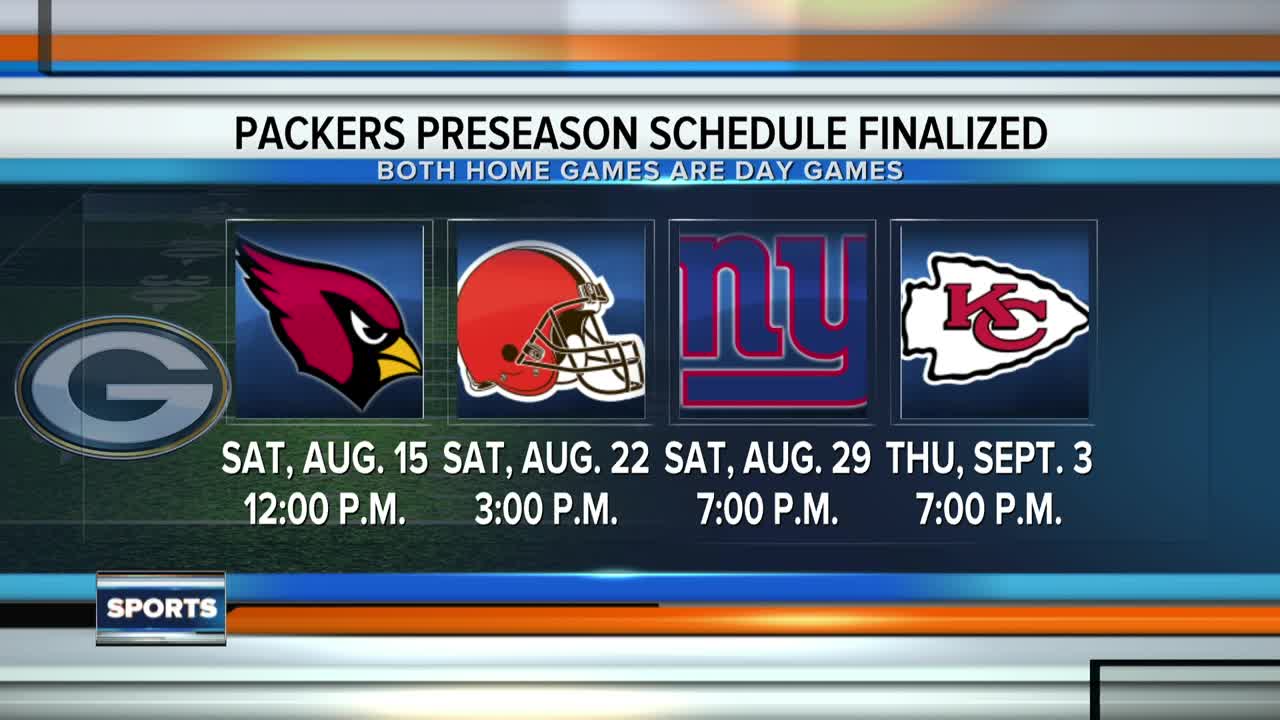 The following information was released by the Packers organization:

The Green Bay Packers’ preseason schedule consists of three games played on Saturdays and one on a Thursday, with both home games being played in the afternoon and each road game being played at night.

For the fourth consecutive season, Green Bay opens the preseason at home as the Packers welcome the Arizona Cardinals to town for a noon CT kickoff on Saturday, Aug. 15. It will be the first time since 2015 (at Pittsburgh, noon CT) that the Packers will play a preseason contest during the afternoon and marks the first afternoon preseason game at Lambeau Field since 2006, when Green Bay and the Tennessee Titans kicked off in the preseason finale at 3 p.m. CT.

The Packers will stay at home to take on the Cleveland Browns at 3 p.m. CT on Saturday, Aug. 22. It will mark the 26th time the two teams have met in the preseason, tying for the second-most preseason contests Green Bay has played against one opponent (Pittsburgh and Washington). The Packers and Browns played one another in the preseason five times from 2009-19, with each of the last two games taking place in Green Bay (2012 and 2016).

The Packers will go on the road for their final two preseason games for the second time in the last three preseasons. They face a familiar preseason opponent in the New York Giants for the third preseason game on Saturday, Aug. 29, at 7 p.m. CT. The two teams have met 30 previous times during the preseason, the most for Green Bay against one team, but for the first time in the preseason since 1997 in Madison, Wis., and the first time the Packers will be the road team since 1985.

Green Bay will close out the preseason at Kansas City on Thursday, Sept. 3, at 7 p.m. CT. It is the third consecutive year the Packers play the Chiefs in the preseason finale and the ninth time since 2010.

Flagshipped by Milwaukee’s WTMJ-TV, Packers preseason games are televised over an 18-station network throughout the state of Wisconsin, Upper Michigan, northeastern Minnesota, the Quad Cities, Des Moines, Cedar Rapids and Waterloo in Iowa, Peoria in Illinois, St. Louis in Missouri, Sioux Falls in South Dakota, Omaha in Nebraska and Anchorage, Fairbanks and Juneau in Alaska.