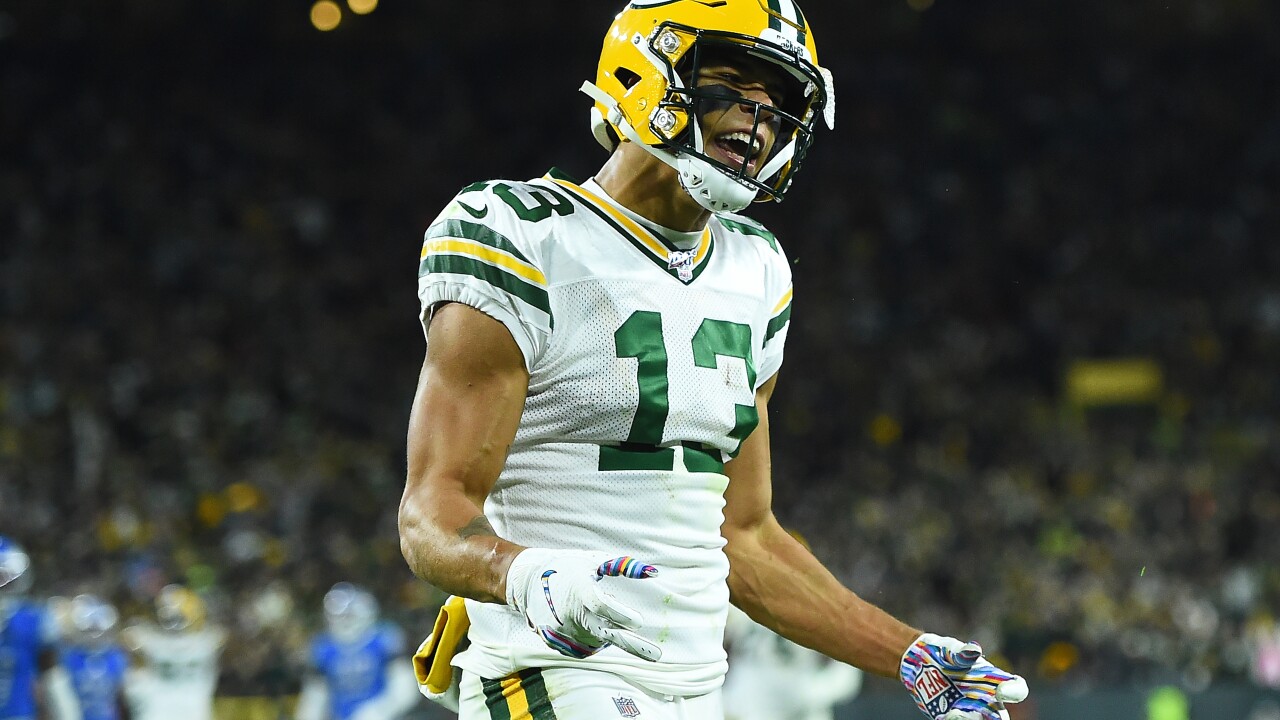 The 6-foot-5 receiver was cut before the season, signed to the practice squad, only to end up on the roster in short order.

But on Monday night, Green Bay needed Lazard, and the undrafted second-year pro delivered with a career-high four catches for a career-best 65 yards and his first career touchdown in a 23-22 win over Detroit.

“It was obviously an awesome moment, getting my first touchdown, especially here in Lambeau,” Lazard said. “Just kind of fulfilling the journey of being able to be here with this amazing organization. To catch a touchdown in a critical moment is something huge and something that, as a kid, you grow up dreaming about. It feels great to fulfill it.”

Matt LaFleur and Aaron Rodgers. The Packers are 5-1 and in sole possession of first place in the NFC North, and yes, their defense is a big part of that. But all the noise surrounding the relationship between the 39-year-old first-year coach and the 35-year-old Super Bowl-winning quarterback has been drowned out by the franchise’s best start since 2015 and best start in the division (3-0) since 2012.

In order for Green Bay to have success this season, LaFleur and Rodgers were going to have to learn to trust one another. They have. Rodgers has trusted LaFleur’s playcalls. Even when they didn’t work. And it was LaFleur and his staff who trusted Rodgers on Monday night when Rodgers lobbied for Lazard, the sixth receiver in the Packers’ six-man receiving group, to get in the game.

“I may have put in a good word there in the fourth quarter to get him some opportunities,” Rodgers said.

Rodgers said he went to wide receivers coach Alvis Whitted and asked “if 13 could come in for a little bit.”

Lazard had never caught a pass in a regular-season game from Rodgers before Monday.

A win’s a win. But the Packers offense is still struggling. Green Bay was 4-for-12 on third down and 1-for-4 in the red zone on Monday. LaFleur said Tuesday that he and his staff also counted six dropped passes against the Lions, including the dropped touchdowns by Aaron Jones and Jimmy Graham.

“There certainly were some drops out there that our guys would like to have back,” LaFleur said. “Aaron (Rodgers) is so consistent, and that’s why he is who he is. And any time you have a quarterback like that, you always believe that you can come back and win a football game and I think our guys believe that as well.”

It’s difficult to ask Rodgers to keep bailing out his teammates. They have to help him out by grabbing the catchable passes.

Lazard. With Rodgers’ top target Davante Adams sidelined indefinitely with turf toe, Geronimo Allison leaving Monday’s game with a concussion and rookie Darrius Shepherd’s stock falling (see below), Lazard’s stock has never been higher. He has the trust of Rodgers and that goes a long way and will likely result in more targets.

Shepherd. Everyone has bad games. Everyone doesn’t have bad games on “Monday Night Football” as an undrafted rookie. Shepherd fumbled a punt return and had a pass from Rodgers bounce off his hands and facemask near the goal line and land in the hands of a Lions defender. Luckily for Shepherd, both plays only resulted in field goals and he seems to still have the backing of his head coach.

“It was a tough night, but he continued to battle and he’s going to have to put it behind him,” LaFleur said of Shepherd. “I know that I certainly still trust him. But it was a rough night and he’s just going to have to bounce back and we’re going to support him. We’re just fortunate to come out on top.”

If Allison (chest, concussion) and Adams (toe) can’t suit up against the Raiders on Sunday, general manager Brian Gutekunst will need to add another receiver. Green Bay only has Marquez Valdes-Scantling, Jake Kumerow, Lazard and Shepherd.