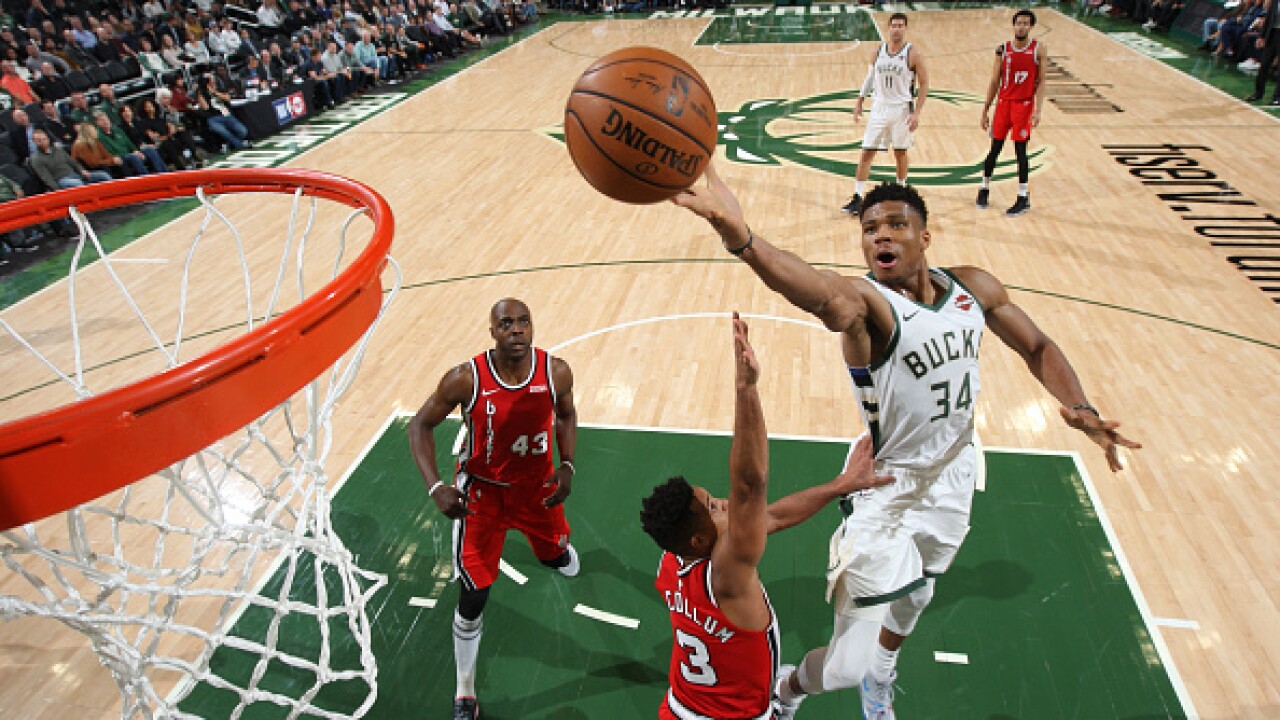 Gary Dineen/NBAE via Getty Images
CHICAGO, IL - NOVEMBER 21: Giannis Antetokounmpo #34 of the Milwaukee Bucks shoots the ball against the Portland Trail Blazers on November 21, 2019 at the United Center in Chicago, Illinois. NOTE TO USER: User expressly acknowledges and agrees that, by downloading and or using this photograph, user is consenting to the terms and conditions of the Getty Images License Agreement. Mandatory Copyright Notice: Copyright 2019 NBAE (Photo by Gary Dineen/NBAE via Getty Images)

MILWAUKEE (AP) -- Giannis Antetokounmpo had his second triple-double of the season and the Milwaukee Bucks beat Carmelo Anthony and the short-handed Portland Trail Blazers 137-129 on Thursday night.

Antetokounmpo had 24 points, 19 rebounds and a career-high 15 assists to lead the Bucks to their sixth straight victory. Antetokounmpo, who also had a triple-double in the season opener, has 16 career triple-doubles. Milwaukee is 14-2 in those games.

Eric Bledsoe added 30 points and six assists in the Bucks' highest-scoring game of the season.

After scoring 10 points on 4-of-14 shooting in 24 minutes in his season debut Tuesday night against the Pelicans, Anthony had 10 points in the first half Thursday. The 10-time All-Star finished with 18 points (6-of-15 shooting) and seven rebounds for the Blazers, who were without Hassan Whiteside (hip), Damian Lillard (back), Zach Collins (shoulder) and Jusuf Nurkic (leg).

CJ McCollum scored a game-high 37 points and Skal Labissiere added 22 points, 12 rebounds and five blocks off the bench for Portland. The Trail Blazers lost their third straight game and seventh of the last nine against the Bucks, including sixth straight in Milwaukee.

The Bucks made their first seven shots, including three 3s, and led 17-6. Milwaukee never trailed.

The Bucks also had their highest first-half total, leading 72-58.

Antetokounmpo made his first career NBA start against Anthony. The date was Dec. 18, 2013. Giannis had 10 points and seven rebounds before fouling out. Carmelo scored 29 points in New York's victory.