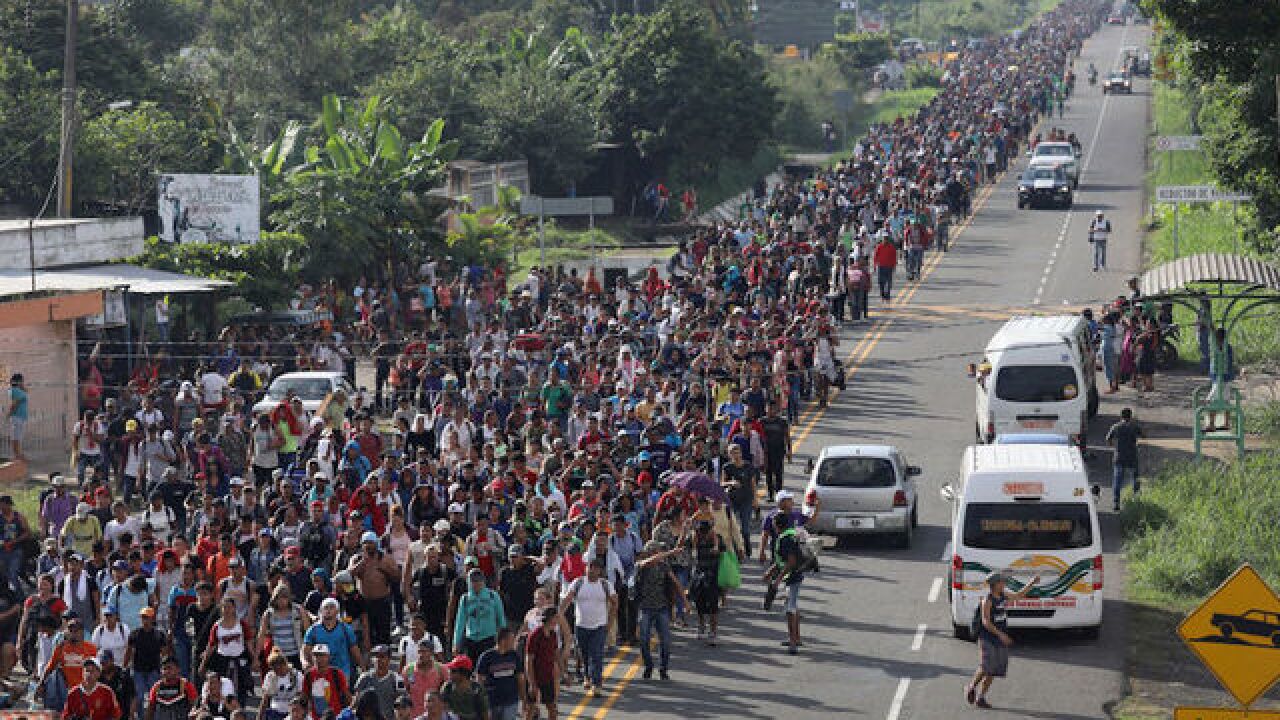 Image copyright 2018 Getty Images. All rights reserved. This material may not be published, broadcast, rewritten, or redistributed.
John Moore
<p>A migrant caravan walks into the interior of Mexico after crossing the Guatemalan border on October 21, 2018 near Ciudad Hidalgo, Mexico The caravan of Central Americans plans to eventually reach the United States. U.S. President Donald Trump has threatened to cancel the recent trade deal with Mexico and withhold aid to Central American countries if the caravan isn't stopped before reaching the U.S. </p>

Crowds of migrants resumed their long journey north on Sunday from the Mexican border city of Ciudad Hidalgo, according to Mexican federal police officers.

The caravan was headed for Tapachula, a city about 37 km (23 miles) north of the Mexico-Guatemala border, the officers told CNN.

There were about 10 buses awaiting migrants along the highway between Tapachula and Ciudad Hidalgo and the drivers had been instructed to carry the migrants to shelters in Tapachula, the officers said. It was unclear how many of the group were from the migrant caravan and how many were Mexicans who joined the march.

One migrant, a 20-year-old Honduran named William, told CNN he crossed into Mexico via a float that carried him across the muddy Suchiate River on Saturday.

He left home looking for work, he said, and was ultimately bound for either Mexico or the U.S. -- wherever he could land a job.

Approximately 640 migrants requested asylum in Mexico, according to a statement from the Mexican government and the National Migration Institute.

Authorities have given "priority attention to 164 women, 104 children and elders," the statement said, adding that some of the women are pregnant and there is at least one unaccompanied minor.

An additional statement from the Mexican government said there were 2,2000 migrants remaining on the bridge connecting Guatemala and Mexico, and about 900 tried to cross into Mexico illegally.

The Honduran Foreign Ministry previously said 2,000 people in the caravan had turned around and headed home.

Thousands of Central American migrants fleeing poverty and violence were initially prevented from crossing the bridge.

On Friday Mexican authorities began allowing a trickle of migrants, starting with women and children, to pass through the gates and board buses bound for refugee camps.

Others pushed through or climbed over a steel gate before riot police stopped them with tear gas and smoke canisters. Some migrants collapsed, coughing or weeping, according video from the scene.

It's unclear exactly how many migrants were allowed to legally cross the border into Mexico, where they were taken to shelters to rest. On Saturday, with the punishing heat bearing down on them, some migrants took matters into their own hands, and crossed into Mexico on rafts that ferried them across the river.

One of the migrants marching to Ciudad Hidalgo, Luis Miguel Martinez, 30, also said his goal was to find work in the United States so he could feed his family, including two daughters he left behind in Honduras.

He was carrying a pink backpack and a blanket for a woman who also had a small child. But he was happy to help.

It's unclear whether the caravan will be allowed to reach the U.S. border. Mexican authorities previously outlined their plan to respond to the caravan once it arrived at their border.

• Anyone with a valid visa will be able to enter and move freely.

• Anyone who wants to be recognized as a refugee or as a beneficiary of "complementary protection measures" must do so individually. Those who do so will be held "at a migratory station" for as many as 45 business days.

• Anyone who enters "in an irregular manner" will be "rescued and subject to an administrative procedure and, where appropriate, will be returned to their country of origin in a safe and orderly manner."

Mexican authorities also have said they're asking for help from the United Nations High Commissioner for Refugees to process migrants seeking refugee status.

The caravan formed October 13 in San Pedro Sula, Honduras, and arrived in Guatemala on Monday.

Its slow procession north has prompted U.S. President Donald Trump to threaten to cut aid to Central American nations and to send troops to the U.S. border if Mexico fails to stop the surge.

US Secretary of State Mike Pompeo met with top officials in Mexico City on Friday night to discuss the caravan and other matters. Speaking to reporters on a tarmac, Pompeo accused the caravan of using women and children "as shields as they make their way through."

"This is an organized effort to come through and violate the sovereignty of Mexico," Pompeo said.

The caravan formed just weeks before the US midterm elections. And many Republican candidates have echoed Trump's rhetoric about boosting border security and cracking down on illegal immigration.

The U.S. President has pointed to the caravan as a key issue in the upcoming elections, and has used it to attack Democrats, saying -- without evidence -- they wanted the caravan to arrive before Election Day so the migrants would vote for Democrats.