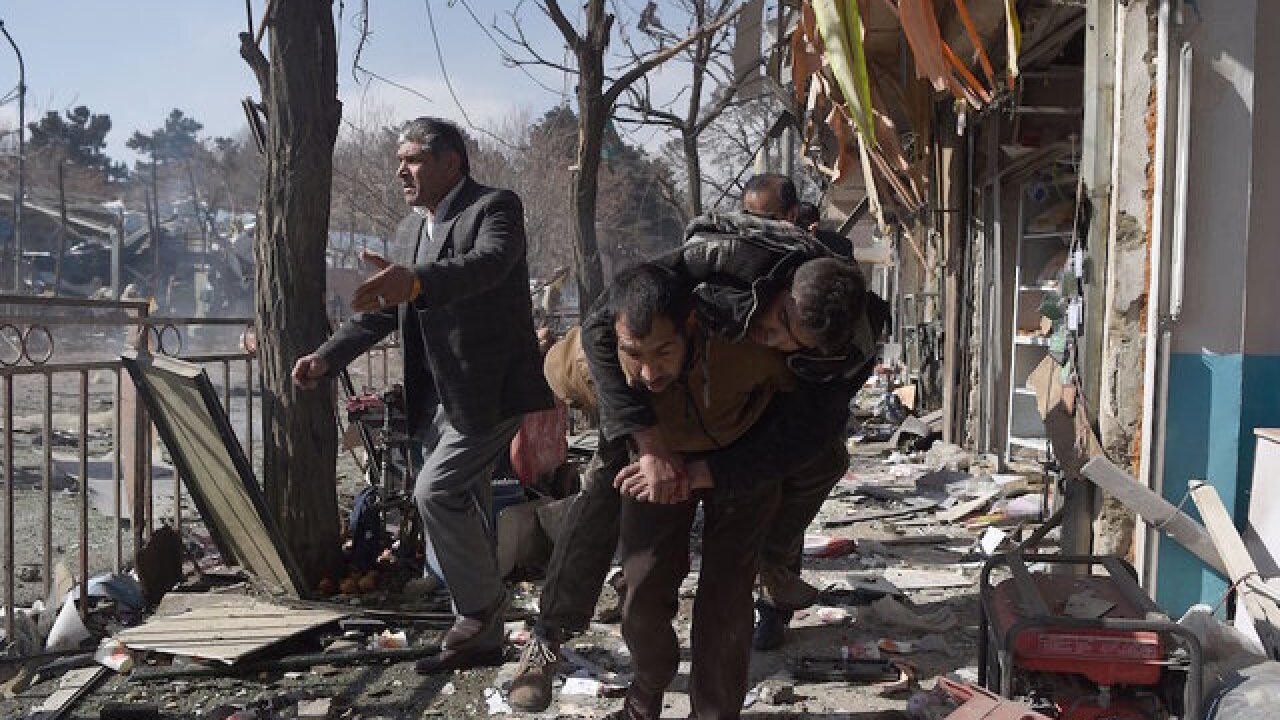 © 2018 Cable News Network, Inc.
Wakil Kohsar/AFP/Getty Images
<p>Afghan volunteers carry a victim of a car bombing in front of the old Ministry of Interior building in Kabul on Saturday.</p>

Afghanistan declared a national day of mourning Sunday after an ambulance packed with explosives blew up in a crowded street in the capital of Kabul, killing 103 people.

The Taliban claimed responsibility for the Saturday attack, which injured 235 people, including 30 police officers, Kabul police chief Basir Mojahid said. It comes a week after militants stormed a Kabul hotel and killed scores in a 12-hour standoff.

Flags were flown at half-staff nationwide after the latest attack. The government set aside Monday as a public holiday and Tuesday as a day of prayer for the victims, according to presidential spokesman Shah Hussain Murtazawi.

Police identified the attacker at a second checkpoint, Rahimi said, but couldn't stop him before he detonated the explosives in a central area near the old Interior Ministry building, a hospital and diplomatic buildings.

The attack, in the heart of what's considered the most secure part of the city, renewed doubts over Afghan authorities' ability to keep people safe.

Afghanistan has had a deadly few days, with ISIS attacking an office of the aid group Save the Children in the eastern city of Jalalabad Wednesday, killing at least four people and injuring dozens.

And last weekend, gunmen attacked the Intercontinental Hotel in Kabul, killing at least 22 people during a 12-hour standoff with Afghan security forces. Six gunmen were killed. The Taliban also claimed responsibility for that assault.

Every time the so-called ring of steel in the city is penetrated, it undermines the government's ability to appear in control of even its most important sanctuaries, he said.

The Taliban's swift claim of responsibility marked a contrast to a March attack on a key military hospital in Kabul that killed at least 30 people, many of them doctors and injured soldiers, Paton Walsh said.

The Taliban denied it was behind the hospital attack, and ISIS eventually claimed it.

This time, the Taliban had no such qualms, Paton Walsh said. It's possibly a sign the Taliban doesn't want to lose out to its younger, nastier competitor insurgency in the extremism stakes. A year ago, medical facilities were off-limits; now, an ambulance can be used as a bomb.

"This murderous attack renews our resolve and that (of) our Afghan partners," Trump said in a statement.

"The Tablian's cruelty will not prevail. The United States is committed to a secure Afghanistan that is free from terrorists who would target Americans, our allies, and anyone who does not share their wicked ideology. Now, all countries should take decisive action against the Taliban and the terrorist infrastructure that supports them."

The head of the UN mission in Afghanistan said the attack was "nothing short of an atrocity" that targeted a civilian area.

"While the Taliban claim suggested the purpose of the attack was to target police, a massive vehicle bomb in a densely populated area could not reasonably be expected to leave civilians unharmed," Tadamichi Yamamoto said in a statement.

The latest attack comes at a crucial moment in the 16-year Afghanistan war, Paton Walsh said.

Last year, US and Afghan officials accepted that things had not gone well -- that territory was lost. This year, they insist, the Taliban will begin to lose territory again. Attacks such as this not only diminish morale but show strongholds as vulnerable, Paton Walsh said.

Hundreds more US troops are en route to Afghanistan to begin a much riskier mission: training Afghan troops outside the wire.

There will be Americans on the front lines who know that combat may be part of their mission and who may die, Paton Walsh said.