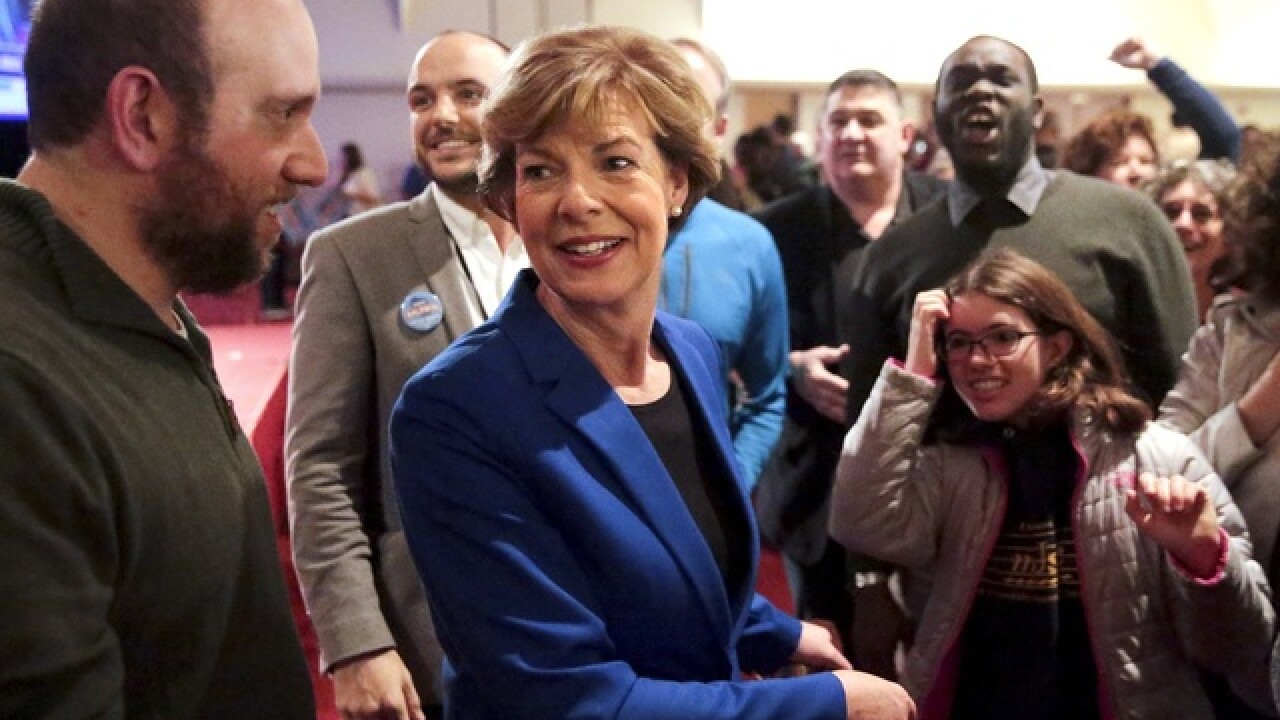 Democratic Wisconsin Sen. Tammy Baldwin cruised to a re-election win over Republican Leah Vukmir after successfully making the race about health care and her support for guaranteeing insurance coverage for people with pre-existing conditions.

Baldwin, one of the Senate’s most liberal members, beat Vukmir, a staunch supporter of President Donald Trump, by double digits, based on unofficial results.

Baldwin won a number of counties that Trump took in 2016 when he narrowly carried Wisconsin by less than 1 point.

Baldwin said in her victory speech Tuesday that her win sends a “loud and clear message” that people in Wisconsin want a senator who will stand up for them against special interests.

Baldwin was an early target for outside conservative groups that spent millions attacking her over the summer. But Baldwin outraised Vukmir 5-to-1 and blanketed the airwaves with ads contrasting her support for the Affordable Care Act with votes Vukmir made in the state Legislature in favor of insurance companies.

“Democrats, Republicans and independents sent a loud and clear message tonight that they wanted a senator who works not for the special interests, but someone who works for you,” Baldwin said in her victory speech.

Vukmir campaigned as the underdog and urged Republicans who supported Trump to surprise the pollsters like they did in 2016.

But Democrats came through for Baldwin in a race that marked the first time in Wisconsin history both major party candidates for U.S. Senate were women.

Baldwin had recent history on her side: In the last three midterm elections, no incumbent Wisconsin senator from the party not in the White House lost a re-election bid.

Stephenie Hamen, a 42-year-old artist from Sun Prairie, said she voted for Baldwin, in part as a vote for women’s rights and a vote against Trump.

“I don’t know if it was to vent (against the president),” she said. “It’s a way to stand up for women as Americans and be heard. It’s a scary time to be a woman in America. No matter what (Trump) says about being a white man in America, it’s scarier for women and minorities. If the Republicans stay in power, we’re writing a check for that party to do whatever they want. If we continue down that path we have no idea what’s coming next.”

Baldwin is a supporter of Sanders’ “Medicare for All” bill and ran as a defender of the Affordable Care Act. Baldwin cast Vukmir, a nurse, as the potential deciding vote to repeal the law and its guarantees of insurance for people with pre-existing conditions.

Vukmir, 60, focused on Baldwin’s handling of the opioid over-prescription crisis at the Tomah Veterans Affairs Medical Center, saying her inaction let veterans down. But the widow and parents of a veteran who died there has come out in support of Baldwin, cutting television ads to help her and undercutting Vukmir’s criticism.

Baldwin recounted the story of her childhood illness that made her an advocate for universal health coverage, while also speaking in detail for the first time about her mother’s struggles with mental illness and prescription drug abuse. Baldwin said that has fueled her fight against opioid abuse.