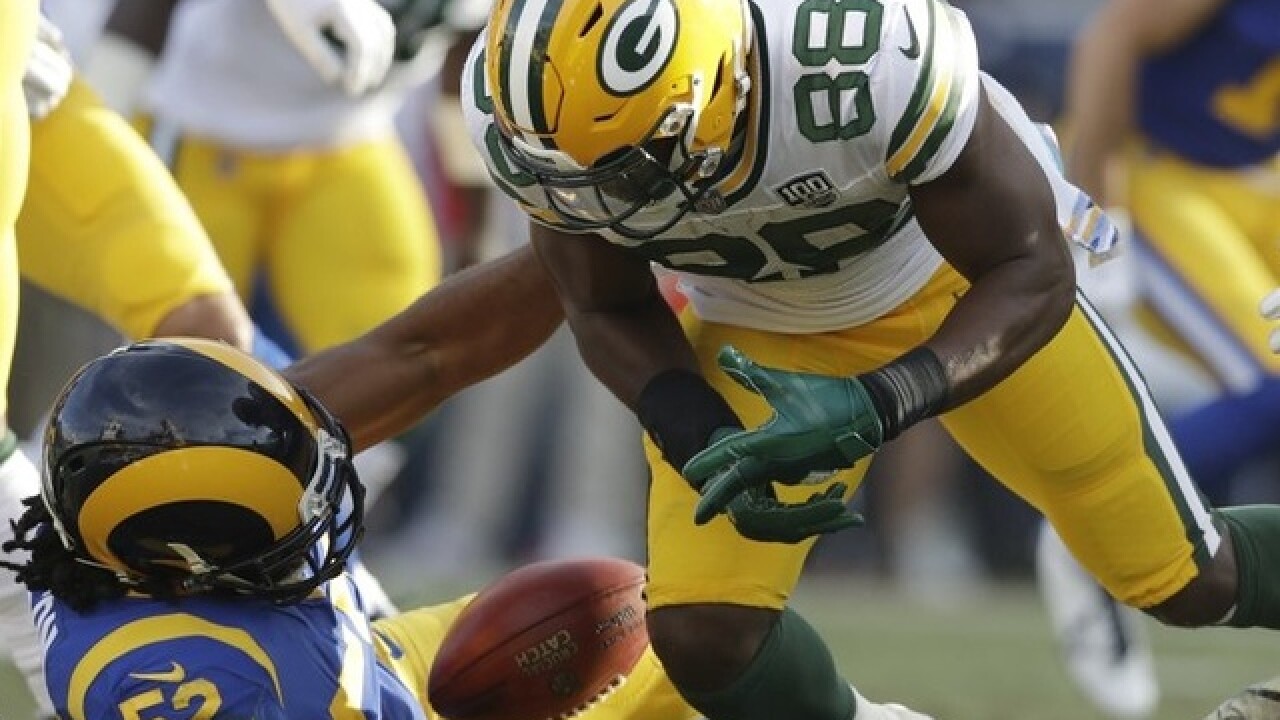 Ramik Wilson was not the most likely candidate on the Los Angeles Rams’ superstar-laden roster to make the decisive play late in the fourth quarter of a tight game with Green Bay.

Yet there went the backup linebacker, flying downfield on kickoff coverage and clobbering Ty Montgomery to force a fumble that he recovered himself.

“It was one of the biggest collisions I’ve been in,” Wilson said. “So we both felt it, and he fumbled.”

Halfway through a perfect regular season, these Rams are starting to feel like a big hit.

Greg Zuerlein made a 34-yard field goal with 2:05 left before Wilson forced the fumble that allowed the Rams to keep Aaron Rodgers stuck on the sideline in the final minutes of Los Angeles’ 29-27 victory over the Packers on Sunday.

Jared Goff passed for 295 yards and three touchdowns while the Rams (8-0) were sternly tested by the Packers (3-3-1). Both teams rallied from 10-point deficits to take a lead in front of a rollicking, bipartisan Coliseum crowd.

But the Rams extended their best start since 1969 by capitalizing on two crushing special-teams mistakes by Green Bay.

Marquez Valdes-Scantling caught a 40-yard touchdown pass from Rodgers with 8:50 left to put the Packers ahead 27-26, but Goff and Gurley drove the Rams into range for Zuerlein’s second field goal of the fourth quarter after a measly 25-yard punt by JK Scott.

Montgomery then coughed up his return, and Wilson pounced on the ball.

“That play didn’t lose the game, but it took away an opportunity to win,” Rodgers said.

Montgomery declined to talk after the game. Packers coach Mike McCarthy said the return man was supposed to take a touchback.

“You trust your players on tough decisions, close decisions,” McCarthy said. “I think Ty was just trying to make a play.”

Josh Reynolds caught two touchdown passes for Los Angeles. Gurley had 114 yards rushing and 81 yards receiving, and he scored a touchdown in his franchise record-tying 11th consecutive game on a 30-yard pass in the third quarter .

“That was probably my favorite (win) of the year,” said Goff, who went 19 for 35 without an interception.

Both teams had loud contingents of fans at the Coliseum, where Green Bay won the first Super Bowl in 1967. The Packers were greeted by a rowdy bunch of California Cheeseheads in Green Bay’s first trip to Los Angeles since the NFL returned in 2016.

The Packers were grateful for the size of their fan base, which seemed similar to the turnout for the Minnesota Vikings earlier this season and the Philadelphia Eagles last season.

“I don’t know if I’ve ever seen anything like it,” McCarthy said. “Obviously, I haven’t been to a game here in decades, but it was a great atmosphere.”

Goff had a pregame chat with Rodgers, his fellow Cal product and one of his childhood idols while growing up in Northern California.

When asked what it felt like to beat Rodgers, Goff replied: “I don’t think of it that way. We beat the Packers today. It was fun competing with him on the same field. Hell of a player. A guy I’m a fan of. It was a fun one.”

In the final minute, Gurley ran 17 yards for a key first down — but stopped before reaching the end zone, allowing the Rams to run out the clock instead of giving the ball back to Green Bay. His fantasy team owners likely lost their minds, and millions of dollars in bets were decided when the Packers covered the spread.

“Man, forget fantasy,” Gurley said with a grin. “Forget Vegas. We got the win, so that’s all that matters.”

The Rams faced their largest deficit of the remarkable season when they trailed 10-0 early in the second quarter. They even punted on their first three drives for the first time in coach Sean McVay’s two-season tenure.

Gurley’s scoring catch put Los Angeles ahead in the third quarter. The grab also extended Gurley’s TD streak to tie the Rams record set by Elroy “Crazylegs” Hirsch in 1950-51. Gurley leads the NFL with 15 touchdowns, and he became the fourth player in league history to score at least 15 touchdowns in the first eight games of a season, joining Jim Brown (17 in 1958) and Priest Holmes (15 in 2002 and 2004).

Sam Shields made several big plays for LA against his former team. The veteran defensive back caught a pass from Johnny Hekker on a fake punt, and he later downed a punt at the Green Bay 1 to set up the Rams’ defense for its safety. Shields played seven seasons with the Packers before his fourth concussion in 2016 nearly ended his career, but he returned to the NFL with the Rams this season.