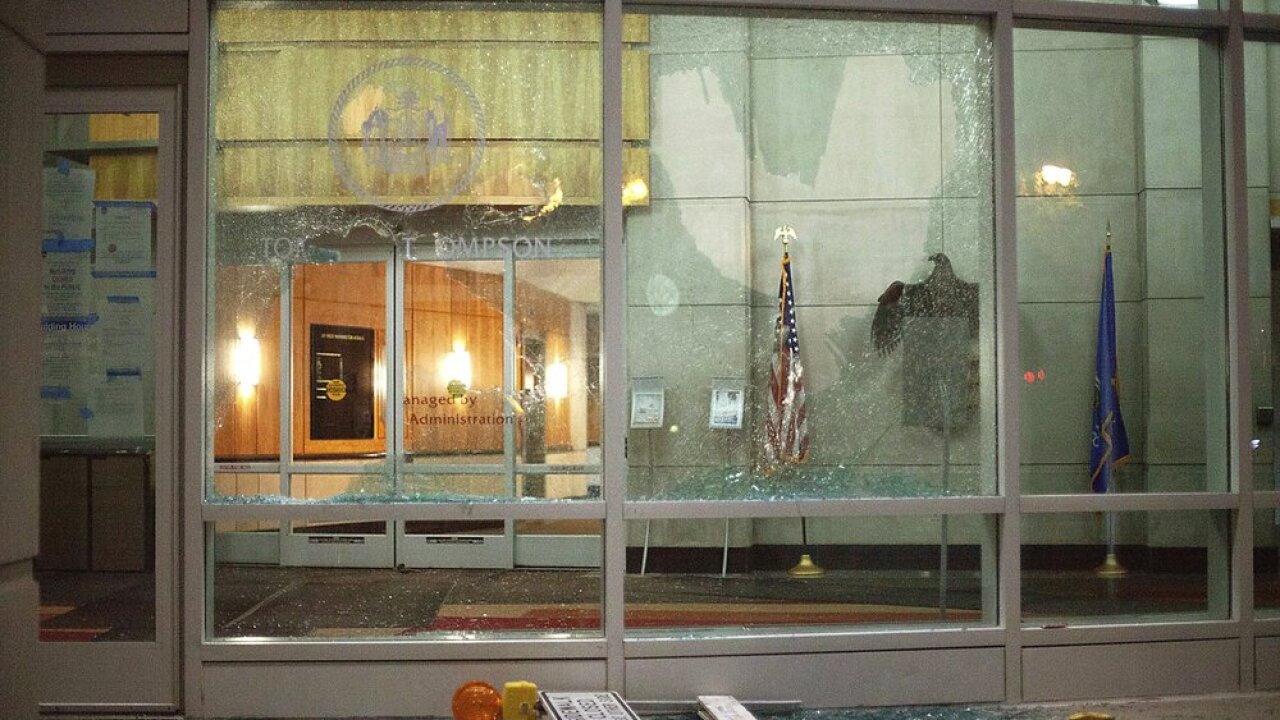 The windows of the Tommy G. Thompson Center on Public Leadership in Madison, Wis. are shattered during demonstrations Tuesday, June 23, 2020. Crowds outside the Wisconsin State Capitol tore down two statues and attacked a state senator amid protests following the arrest of a Black man who shouted at restaurant customers through a megaphone while carrying a baseball bat. (Emily Hamer/Wisconsin State Journal via AP)

MADISON, Wis. (AP) — Wisconsin’s governor activated the National Guard on Wednesday to protect state properties after a night of violence that included the toppling of two statues outside the state Capitol and an attack on a state senator.

Protesters also threw a Molotov cocktail into a government building and attempted to break into the Capitol Tuesday night, only to be repelled by pepper spray from police stationed inside. The violence broke out as a group of 200 to 300 people protested the arrest of a Black man who shouted at restaurant customers through a megaphone while carrying a baseball bat.

Gov. Tony Evers, who toured the damage and said the violence was in “stark contrast” to earlier peaceful protests, said he was activating the National Guard “to make sure people can exercise their First Amendment rights while ensuring the safety of members of the public and state buildings and infrastructure.”

Republican state lawmakers faulted Evers and Madison’s Democratic mayor for not moving more quickly on Tuesday to quell the violence.

“Enough is enough,” said Republican Senate Majority Leader Scott Fitzgerald. “Governor Evers has all of the tools at his disposal to stop this.”

The violence unfolded in a city long known as a liberal bastion with a long history of protest, dating back to student demonstrations on the University of Wisconsin campus in the 1960s. About 100,000 people protested in 2011 over then-Gov. Scott Walker’s anti-union proposals.

It also exposed simmering anger over the 2015 shooting by police of a 19-year-old Black man by an officer who remains on the force. That shooting has been referenced by protesters in recent weeks.

The violence started Tuesday after Madison police arrested a protester who came to a restaurant across the street from the Capitol with a bat on his shoulder. Video released by Madison police shows the man, Devenore Johnson, talking through a megaphone while walking around the restaurant’s outdoor patio and inside, saying he’s “disturbing” the restaurant and talking about God and the police before walking out.

On another video released by police, as many as five officers can be seen taking Johnson to the sidewalk and carrying him to a police squad car after he resisted arrest.

Police said on Tuesday night a group of 200 to 300 people gathered and entered a private condominium building where they surrounded a tow truck, forcing the driver to abandon it. The crowd broke windows in multiple buildings, threw a Molotov cocktail into the city-county building and brought down the statues on the Capitol grounds.

Protesters chanting for Johnson’s release also broke glass at the Tommy Thompson Center, named for the former Republican governor, and smashed windows and lights at the Capitol.

“Punched/kicked in the head, neck, ribs,” Carpenter tweeted around 4 a.m. “Innocent people are going to get killed.”

One of the statues toppled, decapitated and dragged into a lake about a half-mile away was of Civil War Col. Hans Christian Heg. He was an anti-slavery activist and leader of an anti-slave catcher militia in Wisconsin who fought for the Union and died from injuries suffered during the Battle of Chickamauga.

The base of the Heg statue was defaced with graffiti Wednesday morning that read “Fire Matt Kenny,” a reference to a white Madison police officer who shot and killed 19-year-old Tony Robinson, a Black man, in 2015. Kenny said Robinson had attacked him. Dane County District Attorney Ismael Ozanne, who is Black, cleared Kenny of any criminal wrongdoing and he remains a Madison officer.

The other statue taken down represents Wisconsin’s motto “Forward.” The statue was first installed 125 years ago but replaced with a bronze replica in 1998. It sat prominently outside the Capitol, facing the University of Wisconsin campus and State Street, an avenue lined with bars, restaurants and small businesses. That corridor has been the target of much of the vandalism since the death of George Floyd on May 25 in Minneapolis after a white police officer used his knee to pin the handcuffed Black man’s neck.

The destruction followed similar unrest nationwide following Floyd’s death, but in other cities statues of Confederate soldiers and other symbols of slavery were destroyed.

Protester Micah Le said the two statues paint a picture of Wisconsin as a racially progressive state even though slavery has continued in the form of a corrections system built around incarcerating Blacks.

“The fall of the statues is a huge gain for the movement, though I think that liberal and conservative media outlets will try to represent last night as senseless violence rather than the strategic political move it really was,” Le wrote.

Republicans called on Evers and Madison’s Democratic mayor to do more to protect the Capitol. Republican Assembly Speaker Robin Vos branded the protesters as “thugs.”

Lt. Gov. Mandela Barnes, the first Black person to hold that office, condemned the violence in a tweet but said “far right provocateurs” had “fanned the flames of hate.”

“The mob has become very bold,” Skidmore said. “They see they can get away with a little and they inch forward more and more. (Downtown Madison) is a battle zone right now and I fear for my city.”

Robert Bowhan owns August, a clothing store that was looted during the first night of protests following Floyd’s death. Bowhan, who is white, has boarded up his windows like many other merchants. He said he didn’t know what to expect in the coming days.

“Everyone is probably a little frustrated,” he said. “Of course I’m worried about my business’ survival. This chapter didn’t show up in the small business 101 playbook.”