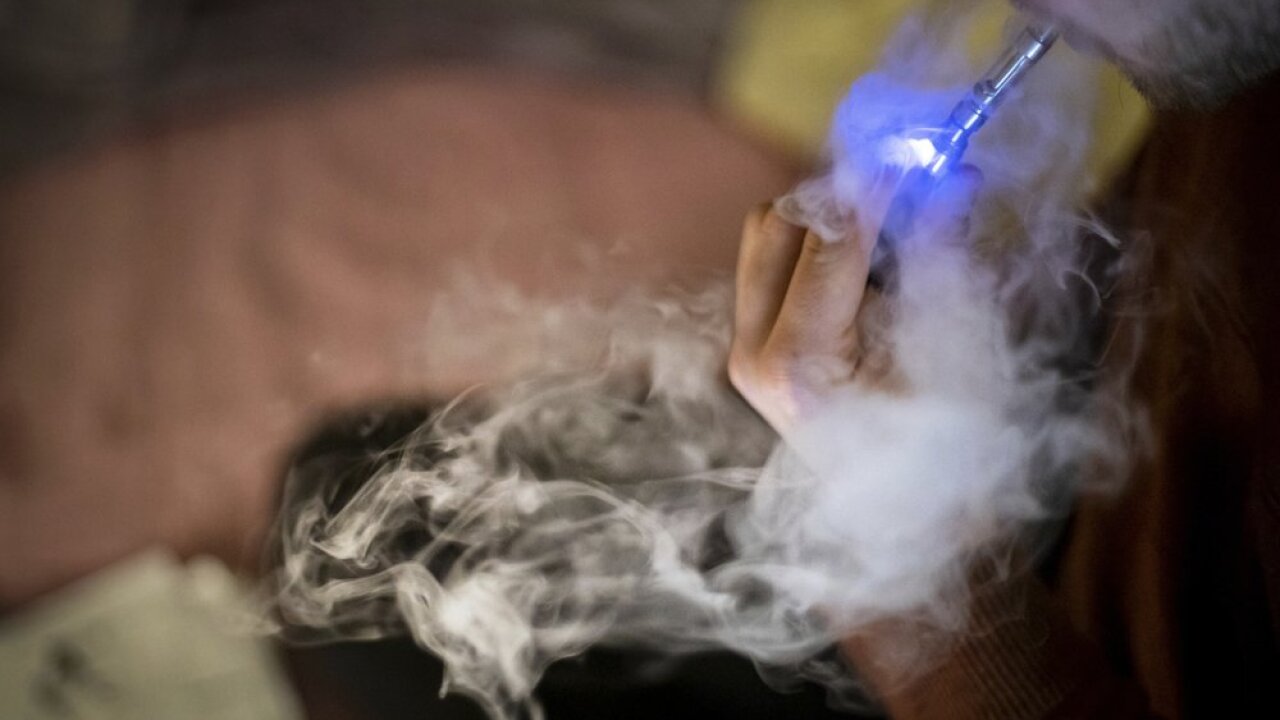 In this March 31, 2019 photo a 24-year-old Madison resident takes a drag from a cannabis vape cartridge in Madison, Wis. Marijuana is currently classified as a Schedule 1 drug by the U.S. Drug Enforcement Administration, defined as a substance with &quot;no currently accepted medical use and a high potential for abuse.&quot; In 2018, blacks were four times as likely to be arrested for marijuana possession in Wisconsin as whites, statistics show. (Emily Hamer/Wisconsin Watch via AP)

MADISON, Wis. (AP) — During Wisconsin’s 2018 midterm election, which saw a record-breaking turnout, it was not the close gubernatorial race that motivated Milwaukee resident Marlon Rockett to cast an early ballot. It was the county’s non-binding referendum on whether recreational use of marijuana should be legalized.

Racial equity is a top reason why Rockett favors legalization, which 70% of Milwaukee County voters also supported. Rockett, who co-hosts a podcast on issues affecting the black community, said laws against marijuana are a “tool that’s used to help hold everyday Americans back.” And the enforcement of these laws, Rockett said, is largely concentrated on African Americans.

“There’s a lot of things in our country that hold (black people) back or promote the inequality,” Rockett said. “If anybody knew their history, they would know that cannabis is especially destructive.”

In fact, in 2018, blacks were four times as likely to be arrested as whites for marijuana possession in Wisconsin, a Wisconsin Watch review shows. Experts point to policing practices and the racial history behind marijuana prohibition as leading to arrest disparities.

The nonprofit news outlet Wisconsin Watch provided this article to The Associated Press through a collaboration with Institute for Nonprofit News.

A few months after the referendum that drew Rockett to the polls, the newly elected governor, Democrat Tony Evers, announced budget proposals for statewide decriminalization of marijuana and legalization of it for medical use.

Under his decriminalization proposal — which is aimed at part in reducing the state’s racial disparities — individuals possessing, manufacturing and distributing 25 grams or less of marijuana would not face penalties. Evers also wants people convicted of possessing small amounts of marijuana to be allowed to have their records expunged.

Now that Evers has signed the two-year state budget without those provisions, Assembly Speaker Robin Vos, R-Rochester, says he would favor legalizing medical marijuana. But Vos has said he opposes loosening enforcement. “We’re not going to decriminalize it so people can carry around baggies of weed all over the state,” Vos said at a WisPolitics event in February.

Almost 15,000 adults in Wisconsin were arrested in 2018 for marijuana possession, a 3% increase from 2017, according to data from the state Department of Justice.

Prison admissions in Wisconsin for marijuana also were higher in 2016 for black individuals than for whites, according to the state Department of Corrections. Some experts believe this disparity can be attributed to policing practices in low-income neighborhoods that tend to have more residents of color.

Under state law, possession of marijuana of any amount for a first-time offense can lead to up to six months in jail and a fine of up to $1,000. Any offense after that is classified as a felony and can result in a sentence of three and a half years in prison with a maximum fine of $10,000.

Marijuana is currently classified as a Schedule 1 drug by the U.S. Drug Enforcement Administration, defined as a substance with “no currently accepted medical use and a high potential for abuse.” Other Schedule 1 drugs include heroin, LSD and ecstasy.

Even though marijuana is illegal in Wisconsin, officers have discretion if they come across someone with marijuana. An officer can ignore it, give a ticket or take someone to jail, Dane County Sheriff Dave Mahoney said.

Dane County District Attorney Ismael Ozanne has told law enforcement not to bring him any cases smaller than 4 ounces — or more than four times larger than what Evers proposed. Other jurisdictions, including Milwaukee, Appleton, Racine, Green Bay and Eau Claire, also have decriminalized, according to the group NORML, which favors legalization.

When Ben, now 23, got pulled over for speeding on a Wisconsin highway in mid-January, he appeared fidgety to the officer, and the officer called for backup. He asked to remain anonymous — “Ben” is a pseudonym — because marijuana is illegal in Wisconsin. He fears further legal repercussions from speaking out.

“I understand I did something wrong,” Ben said. “But at the end of the day, I didn’t bother anybody. I was ready to take my ticket. I was open about speeding. I admitted to it. I apologized.”

In Juneau County, Eric Hahn was charged with two misdemeanor counts of possession in 2014 and served a year and a half of probation. Hahn was taken to jail on a Friday and remained there until his bond hearing Tuesday afternoon, Eric’s wife, Becky, said.

She said she and her husband have always been pro-marijuana. They use it for both recreational and medical purposes. Since starting to use marijuana regularly, they stopped taking their antidepressants, say they sleep better and feel better overall.

Becky Hahn said that as a day care provider in charge of others’ children, it was difficult after Eric’s marijuana possession charge.

“I actually lost some business, and we struggled with that,” she said.

Under state law, if Eric gets caught with marijuana again — regardless of the amount — it is an automatic felony.

Ben is white, but he wanted to share what happened to him because this “happens to the black population repeatedly where unjustified and pointless incarcerations are happening.”

In April, Rep. Melissa Sargent, D-Madison, unveiled a bill to fully legalize marijuana in Wisconsin. Sargent hopes to address racial disparities in the enforcement of Wisconsin’s marijuana laws by broadening the availability of expungement and releasing people incarcerated for low-level nonviolent marijuana offenses.

In Milwaukee, blacks made up 72% of “small-scale” marijuana possession arrests but 39% of the population between 2012 and 2015, according to research by the Public Policy Forum, a nonprofit, independent research organization. The Milwaukee-based group defined “small scale” as possession of 25 grams or less of marijuana.

The same research found whites made up 12% of the arrests but 37% of the city’s population.

The rate of using marijuana is similar between whites and blacks, University of Wisconsin-Madison sociology professor Pamela Oliver said.

“The only possibility for these statistics to happen is for police to be stopping blacks more than whites,” Oliver said. “Possession of marijuana is in the pocket. How did you know it was in their pocket unless you stopped them? We know the usage patterns are not different, so if you’re generating a difference in arrests, it has to be differential policing.”

Evers said his proposal for statewide decriminalization is about “connecting the dots between racial disparities and economic inequity.” He also referred to Wisconsin’s incarceration rate of black men — which is the highest in the country.

“The bottom line is that we are spending too much money prosecuting and incarcerating people — and often persons of color — for non-violent crimes related to possessing small amounts of marijuana,” Evers said in a February tweet.

If Wisconsin decriminalizes, there would likely be a decrease in arrests and an overall reduction in the state’s jail and prison population, said Vincent Southerland, executive director of the Center on Race, Inequality and the Law at New York University School of Law.

However, without addressing policing practices in communities of color, the racial disparities will remain because police tend to “saturate” such communities.

“Simply legalizing marijuana does not, in turn, end the War on Drugs in the way in which the police enforce the law — that’s the fundamental problem,” Southerland said.

The state of New York, where marijuana possession of small amounts is decriminalized, has seen a decline in marijuana arrests but not a decline in the racial disparity of who ends up getting arrested, Southerland said.

“Overall, the arrest numbers are down, but if you’re black, you’re still far more likely to be arrested for it than you are if you’re white,” Southerland said.

States that have legalized, like Colorado, have seen a similar trend — overall arrests go down but the racial disparities are still there.

A 2016 report from Colorado’s Department of Public Safety found that the arrest rate for marijuana possession for whites decreased by 54% while the arrest rate for blacks decreased by 23% from 2012 to 2014. Even though marijuana is legal in Colorado, people 21 years old and older cannot possess more than 1 ounce. Larger amounts may result in “legal charges and fines.”

“Almost anywhere you see cannabis illegal you see disparities in arrests, whether that’s in states that have no lawful cannabis or states that have fully legalized,” said Sam Kamin, a professor of marijuana law and policy at the University of Denver’s Sturm College of Law. “The idea that marijuana is going to make problems in criminal justice disappear is not realistic.”

Said Southerland: “Continuing on this same path (of prohibition) is just essentially continuing to feed the beast of mass incarceration.”

Prior to moving back to Wisconsin, Ben spent four years on the East Coast attending college, where he began smoking marijuana. He said marijuana improved his sleep, grade point average and attitude. He believes Wisconsin should at least decriminalize marijuana, especially with neighboring states, Illinois and Michigan, preparing for full legalization.

“Moving (back to Wisconsin), I feel like I’m 10 years behind,” Ben said. “It’s incredible what people get charged with and go through and deal with simply for doing something that’s not bothering anybody.”

Southerland believes the prohibition of marijuana stems from racial bias. It has historically been associated with immigrants from Mexico and with black people, and it was criminalized as a way to control those populations, he said.

“Legalization would tend to remedy or attempt to remedy some of those faulty connections between race, the drug itself and criminality that have led to disparities in policing, disparities in enforcement and disparities in who we see in our jails and prisons across the country,” Southerland said.