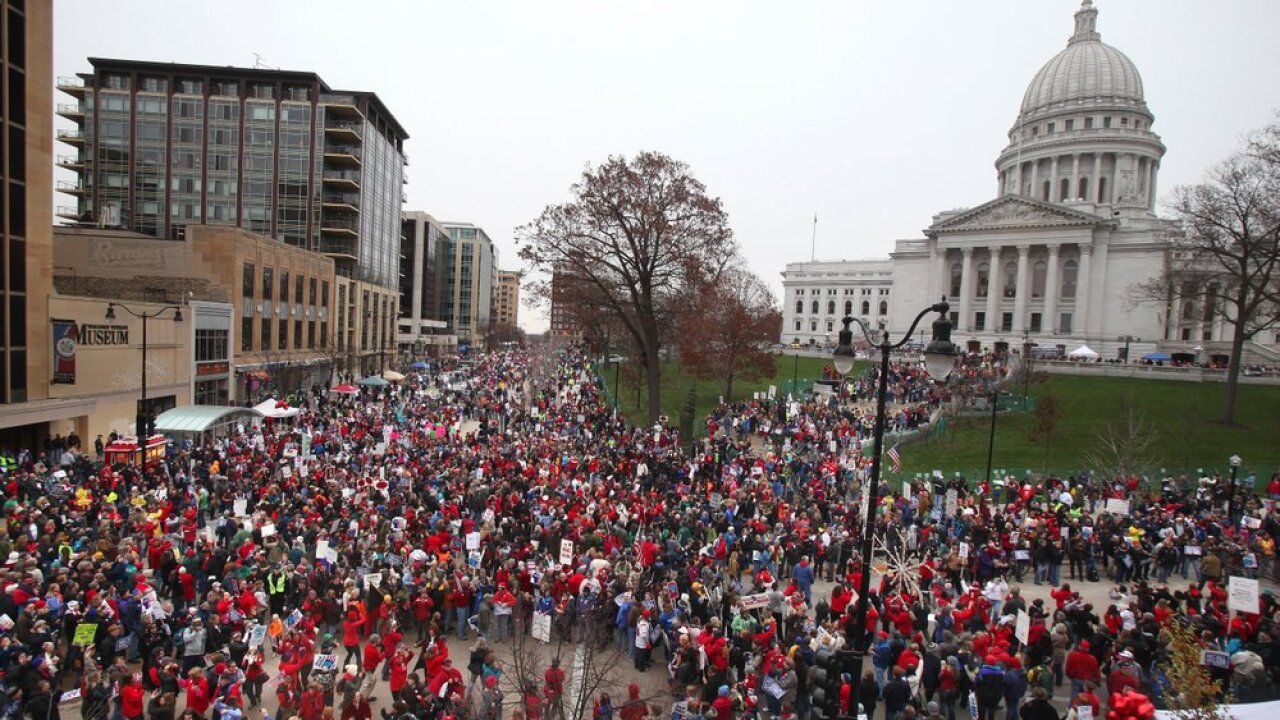 FILE - In this Nov. 19, 2011, file photo, protesters gather for the "We Are Wisconsin" rally and petition signing for the recall of Governor Scott Walker, at the State Capitol in Madison, Wis. Security breaches at the U.S. Capitol and statehouses around the country haven't led to any changes at the state Capitol building in Madison. Gov. Tony Evers closed the building in March to prevent the spread of COVID-19. Thousands of protesters occupied the building for three weeks in 2011. (Rick Wood/Milwaukee Journal-Sentinel via AP, File)

MADISON, Wis. (AP) — The stunning security breaches at the U.S. Capitol and statehouses around the country this week haven’t yet led to any changes at the state Capitol building in Madison.

Democratic Gov. Tony Evers closed the building to the public in March to prevent people from congregating inside and spreading COVID-19. Lawmakers, their aides, maintenance workers and reporters have been allowed to continue working in the building, and the public has been given limited access to view floor debates and committee meetings on a big-screen television from folding chairs spread 6 feet apart in the rotunda. But for the most part the building has become a silent hulk on Madison’s skyline.

President Donald Trump’s supporters have held periodic rallies outside Wisconsin’s Capitol since the November election, but few people have been around to hear them. They organized a car caravan on Wednesday morning and spent two hours circling the building and blaring their horns. But they dispersed several hours before Trump loyalists stormed the U.S. Capitol.

The events at the U.S. Capitol happened as Congress was preparing to certify that Democrat Joseph Biden had won the November election. Lawmakers fled and barricaded themselves in their offices. One woman was fatally shot. A Capitol Police officer also died from injuries he sustained during the siege. Trump supporters also swarmed statehouses across the country, leading some officials to evacuate.

Evers has no plans to open the Wisconsin Capitol for the foreseeable future, much to Republicans’ chagrin. GOP legislators passed a resolution this week calling for the Capitol to reopen, but it was mostly a symbolic gesture.

Before the pandemic, the building was open to anyone. The entrances were unguarded with no metal detectors. People could roam the building as they pleased: They could enter lawmakers’ offices, watch floor debates from overhead galleries and attend any committee meeting.

They refused to leave for three weeks, sleeping in the corridors, banging on the Assembly and Senate doors during debates and chasing Republican lawmakers back into their offices whenever they ventured into the hallways. One day they surrounded then-Sen. Glenn Grothman, now a Republican congressman; a Democratic lawmaker pulled Grothman to safety. Then-Senate Majority Leader Scott Fitzgerald, now a Republican congressman, described the situation as a “powder keg.”

Democratic lawmakers encouraged the occupation, which finally ended after Republicans passed the restrictions. No one was killed. Walker’s administration set up metal detectors at the entrances for several weeks but eventually removed them. A core group of agitators took to disrupting legislative meetings, prompting Capitol Police to drag them out as they yelled at Republicans.

Assembly Republican Majority Leader Jim Steineke tweeted during the siege at the U.S. Capitol that people should “learn the lessons from Wisconsin when liberal throngs stormed the State Capitol and took it over. If you do not clear them now, you will lose control for days if not weeks. More people will come, and it will get eminently (sic) more dangerous.”

Democratic state Sen. Kelda Roys, who served in the Assembly during the occupation, fired back on Twitter on Friday, saying the most dangerous thing about the Wisconsin protests was the amount of pizza people ate and “off-key singing.”

“Teachers, nurses and Dem legislators weren’t plotting the violent overthrow of the government — we were peacefully protesting your bad policy proposals,” she said.

Molly Vidal, a spokeswoman for the Department of Administration, which oversees the Capitol and Capitol Police, declined to comment Friday on security or potential upgrades.

Senate Democratic Minority Leader Janet Bewley said in a telephone interview that she feels safe in the building.

“I was in the Capitol (Thursday) and as I left my office and walked to my car I probably saw six uniformed officers in the building and two outside,” she said. “They were pleasant and smiling. They looked vigilant and professional. For the time being, with the kind of limited access, I feel safe.”