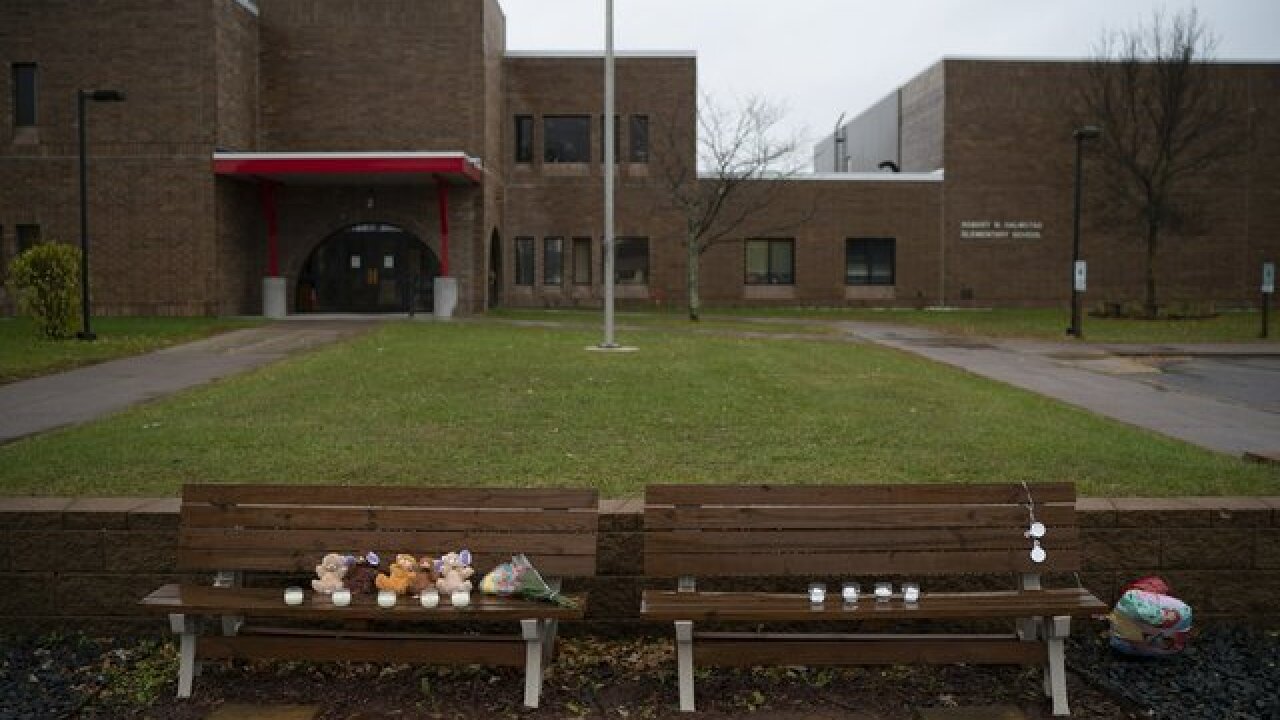 Copyright 2018 The Associated Press. All rights reserved.
<p>Teddy bears, flowers, and candles were placed on benches outside Halmstad Elementary School in Chippewa Falls, Wis. as a memorial to the three Girl Scouts who were struck and killed by a driver who fled the scene, Sunday, Nov. 4, 2018. The western Wisconsin community is grieving the deaths of three girls and an adult who were collecting trash along a rural highway when police say a pickup truck veered off the road and hit them before speeding away. (Jeff Wheeler/Star Tribune via AP)</p>

The Latest on the hit-and-run deaths of several Girl Scouts and an adult in Wisconsin (all times local):

A western Wisconsin school district is making counselors available for students following the deaths three Girl Scouts and a parent who were killed in a hit-and-run crash along a rural road.

Eliopoulos says it’s a “difficult time for our students, families and staff,” and that the district will provide support “for as long as needed.”

Police say a pickup truck veered off the road into a ditch and struck the victims as they picked up trash Saturday. One girl survived and was in critical condition Saturday night. Authorities say the 21-year-old man driving the pickup later surrendered.

The head of Girl Scouts of the USA says “our hearts are broken” after three Girl Scouts and an adult were struck and killed in what authorities say was a hit-and-run crash along a rural Wisconsin highway.

Girl Scouts CEO Sylvia Acevedo issued a statement Sunday expressing condolences for the victims, who were picking up litter along the road in Lake Hallie when a pickup truck veered of the road and hit them. A fourth girl survived but was in critical condition Saturday night at a Minnesota hospital.

Police say the 21-year-old driver sped off but later surrendered. He is expected to be charged with four counts of homicide.

Acevedo says Girl Scouts everywhere stand with “our sister Girl Scouts in Wisconsin to grieve and comfort one another in the wake of this terrible tragedy.”

A western Wisconsin community is grieving the deaths of three Girl Scouts and an adult who were struck by a pickup truck while collecting trash along a rural highway.

The victims were struck Saturday morning while picking up trash in Lake Hallie, which is 90 miles (145 kilometers) east of Minneapolis and just south of Chippewa Falls, where the girls were fourth-graders at Halmstad Elementary School.

Lake Hallie police Sgt. Daniel Sokup says the pickup crossed a lane and veered into a roadside ditch, striking the victims, including a girl who survived but remained in critical condition Saturday night.

Sokup says the 21-year-old driver, Colten Treu of Chippewa Falls, sped off but later surrendered and will be charged with four counts of homicide.

Troop 3055′s regional council, the Girl Scouts of the Northwestern Great Lakes, expressed its condolences on Facebook and said a vigil will be held Sunday evening.