Painting of kids playing back at Wisconsin governor mansion 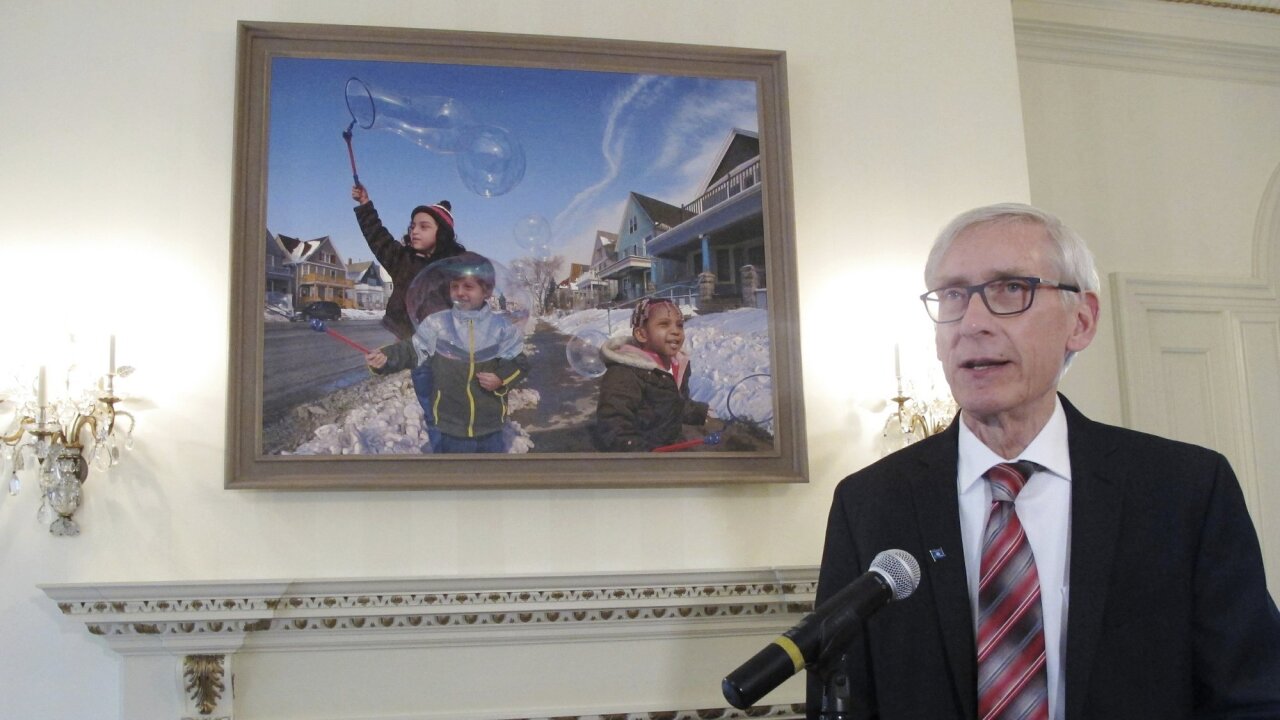 Wisconsin Gov. Tony Evers discusses the painting &quot;Wishes in the Wind&quot; that former Gov. Scott Walker had removed but that Evers had re-installed in the governor&#39;s mansion, Friday, April 5, 2019, in Maple Bluff, Wis. (AP Photo/Scott Bauer)

MAPLE BLUFF, Wis. (AP) — A painting showing three children blowing bubbles and playing together on the streets of Milwaukee was back on display Friday at the Wisconsin governor’s mansion, eight years after former Gov. Scott Walker had it removed.

Democratic Gov. Tony Evers welcomed the artwork back during a ceremony also attended by the artist, one of the children in the painting and former Gov. Jim Doyle, who was in office when it was first put up in 2010.

“The good news about all of this is the voiceless children now have a voice in this picture,” Evers said.

The painting by David Lenz called “Wishes in the Wind” is a realistic portrait of three children playing with bubble wands on a Milwaukee street.

Lenz, who took 10 months in 2010 to paint it, said the goal was to express hope through the children while placing them in an urban background that speaks to challenges society faces. He said the painting was quietly advocating for children who have no political power.

“What can become of their dream?” Lenz said. “What can all of us do to make their lives better?”

The boy at the center of the painting, Brogan Calvillo, stood smiling next to Evers as he discussed the painting.

Lenz said he selected Calvillo to be in the painting because his father and brother had been killed by a drunken driver. A black girl in the painting spent three months at the Milwaukee Rescue Mission and a Hispanic girl was a member of the Boys & Girls Clubs of Greater Milwaukee.

In 2005, the state Executive Residence Foundation began commissioning paintings by Wisconsin artists. Milwaukee-area businessman Richard Pieper and his wife, Suzanne, funded the project. They were both at the ceremony Friday.

Lenz completed the painting in late 2010 and it was hung on the first floor of the mansion just as Doyle’s second term was winding down. After Walker took office in 2011, he had the painting removed.

Walker replaced it with a century-old painting of Old Abe, a Civil War-era bald eagle from Wisconsin. Walker said then it was done to commemorate the 150th anniversary of the Civil War.

Lenz’s painting hung in the Milwaukee central library until returning to the mansion this week.

“It came back home,” Lenz said.