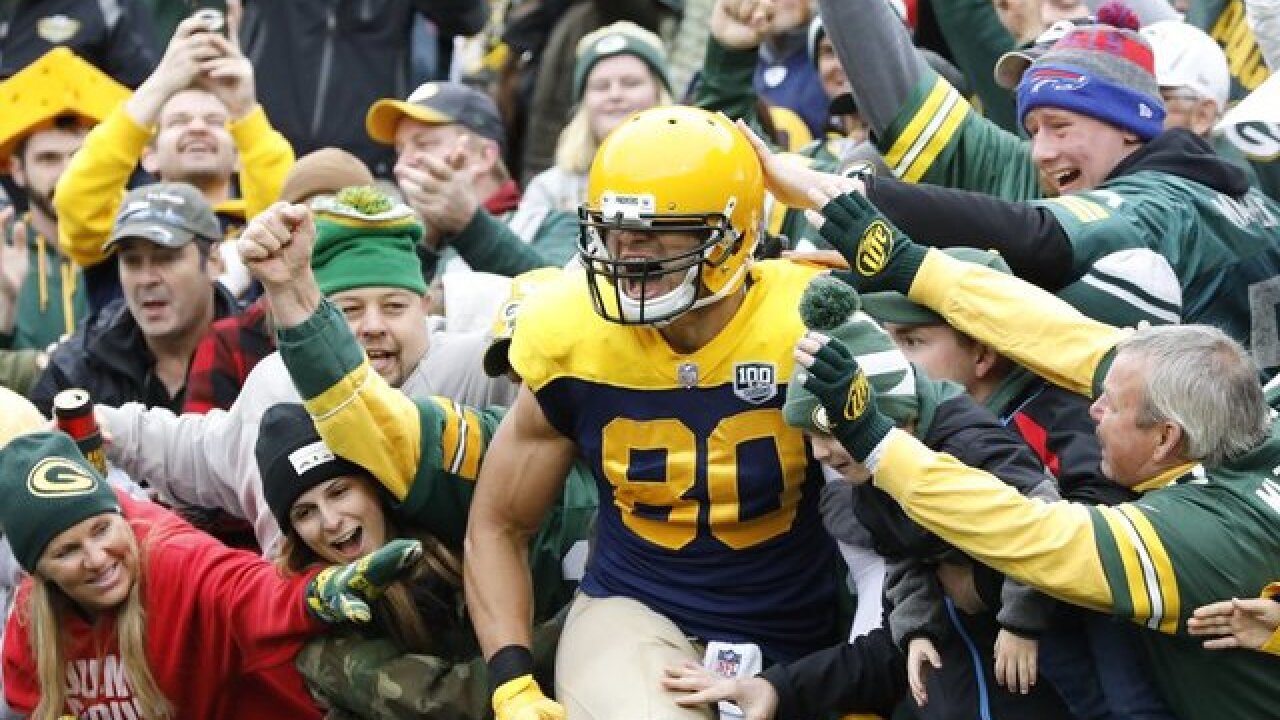 Copyright 2018 Scripps Media, Inc. All rights reserved. This material may not be published, broadcast, rewritten, or redistributed.
<p>Green Bay Packers’ Jimmy Graham celebrates his touchdown reception during the first half of an NFL football game against the Buffalo Bills Sunday, Sept. 30, 2018, in Green Bay, Wis. (AP Photo/Mike Roemer)</p>

This is more like it for the Green Bay Packers.

The offense built a big lead as quarterback Aaron Rodgers gutted through another game with a brace on his injured left knee. The defense had seven sacks and pitched a shutout for the first time in eight seasons.

They put together their most complete game of the year in a 22-0 win over the Buffalo Bills on Sunday.

“I’ll just definitely start off with the defense. I mean, the shutout is huge. It’s what you’re looking for,” coach Mike McCarthy said.

Rodgers also threw an interception off a deflected pass and fumbled the ball away on a sack early in the fourth quarter. The offense wasn’t as productive in the second half after a fast start.

Ever the perfectionist, Rodgers certainly wasn’t pleased, even if he seemed to be moving a little bitter this week.

“It was as bad as we’ve played on offense with that many yards in a long time,” Rodgers said.

Rookie quarterback Josh Allen accounted for three turnovers, including two interceptions and a fumble late in the fourth quarter that stood on review. He was 16 of 33 for 151 yards.

The Bills had a much tougher time on the road in the NFC North, a week after a stunning win at heavily favored Minnesota.

“I take this one on my shoulders,” Allen said. “We can only go as far as the quarterback goes.”

Buffalo did manage to force Rodgers to throw his first interception of the year.

But a 16-0 lead at the half was more than enough cushion against Buffalo’s feeble offense. Even the return of running back LeSean McCoy, who missed a game because of a rib injury, didn’t help the Bills (1-3).

“We were out of rhythm on offense. We needed to find some consistency,” Bills coach Sean McDermott said.

Rodgers and Jimmy Graham connected on their first touchdown pass of the year . Signed in the offseason as a free agent, the athletic tight end made his first official Lambeau Leap after a touchdown earlier this season was wiped out by a flag.

“Usually they come in bunches, so hopefully this is the beginning,” said Graham, who finished with 21 yards on three catches.

Aaron Jones added 65 yards and a score on 11 carries for the Packers, who slowed in the second half after a fast start on offense. A slasher with big-play ability, Jones could eventually emerge as the top ballcarrier in the Packers’ crowded backfield.

Green Bay posted its first shutout since a 9-0 win over the Jets in 2010. ... Mason Crosby kicked two 52-yard field goals, bouncing back after an extra-point attempt in the first quarter hit the right upright. ... S Ha Ha Clinton-Dix picked up his third interception of the year.

A physical defense for Green Bay held the Bills to eight punts and three turnovers on their first 11 drives. Allen was sacked seven times, three by Kyler Fackrell.

McCoy finished with 24 yards on five carries, and 13 yards on three receptions. He walked out of the locker room after the game with what appeared his left hand heavily wrapped.

Things went so well for the D that linebacker Clay Matthews was credited for a half-sack after drawing roughing-the-passer penalties in each of the first three weeks. He finished with five tackles and a hurry on the 6-foot-5 Allen.

“Allen is a big kid, so I don’t think any of his sacks were those weight or pressure on them that you’ve seen weeks prior,” Matthews said. “But hopefully they call it like that moving forward because I didn’t see any today, which is great.”