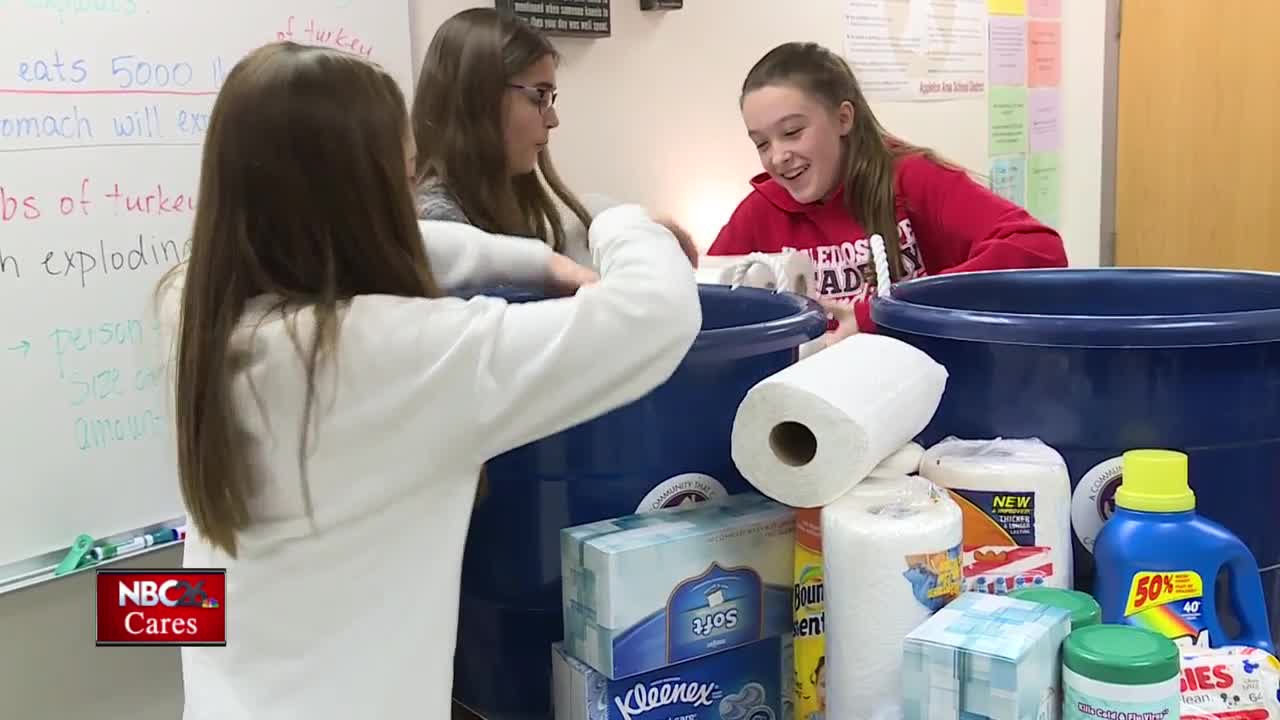 As many people are picking out presents to give loved ones this holiday season, some people in our community are struggling to afford just the basic necessities, such as shampoo and toothpaste, so the Student Council at Kaleidescope Academy has taken on a service project to help fill that need.

APPLETON (NBC 26) — As many people are picking out presents to give loved ones this holiday season, some people in our community are struggling to afford just the basic necessities, such as shampoo and toothpaste, so the Student Council at Kaleidescope Academy has taken on a service project to help fill that need.

"We're making a difference and just to know that, it's really cool," said Sophia Schiltz.

The 8th grader and her fellow council members put out plastic collection buckets around school to support Compassionate Home Health Care's 8th annual Holiday Giving Campaign. They've been encouraging their classmates to help fill the buckets with personal care items and cleaning supplies for families who are facing financial issues.

"They've been running this whole campaign for us and really getting involved by going into different classrooms and talking to students and trying to get as many people involved as possible," explained Head Adviser Toni Giebel.

"They take it and they bring in their own marketing ideas, their own advertising ideas. They're communicating through the school here but also outside and in their homes which I think is so important, because it's a teachable thing. It's a skill that they can learn and take with them moving forward," added Dawn Paradiso-Hansen.

"The families that need it and the individuals that need it are grateful enough that they're receiving something from people who actually care," said Paradiso-Hansen.

For students, working on the Holiday Giving Campaign has been an eye opener.

"I've learned that other people don't have as much as we do, and we need to help them out sometimes," explained Lainey Frisch.

Student council members will sort the donations and prepare them for distribution during a special bagging event.

"The students there also get the opportunity to kind of see what a warehouse is like and working in like manufacturing. It's kind of like a well oiled machine going on," Paradiso-Hansen said.

The goal is to reach at least 500 homes, but if last year's tally is any indication, they'll surpass that goal. In 2019, the campaign reached 1,300 homes.

Frisch said, "I hope they feel happy, because they're getting all these things they can't afford."

Student Sophie School added, "I hope that they're really grateful, and I know they will be."

Paradiso-Hansen said the recipients will take comfort in knowing they're taken care of during the season of giving.

"Those individuals' hearts will be truly, truly warmed because of what this community is doing for them."

This year, the Holiday Giving Campaign began collecting donations in October and will finish this week. They're partnering with over 50 businesses from Green Bay to Oshkosh. Click here for a list of businesses accepting donations.

On Sunday, December 15th, The Bar-Lynndale in Appleton will host a Holiday Giving Campaign event from 12:00 p.m. to 3:00 p.m. There will be 50/50 raffles, a meat raffle and a live auction of a Packers football. They will also be collecting donations of personal care items and cleaning supplies.