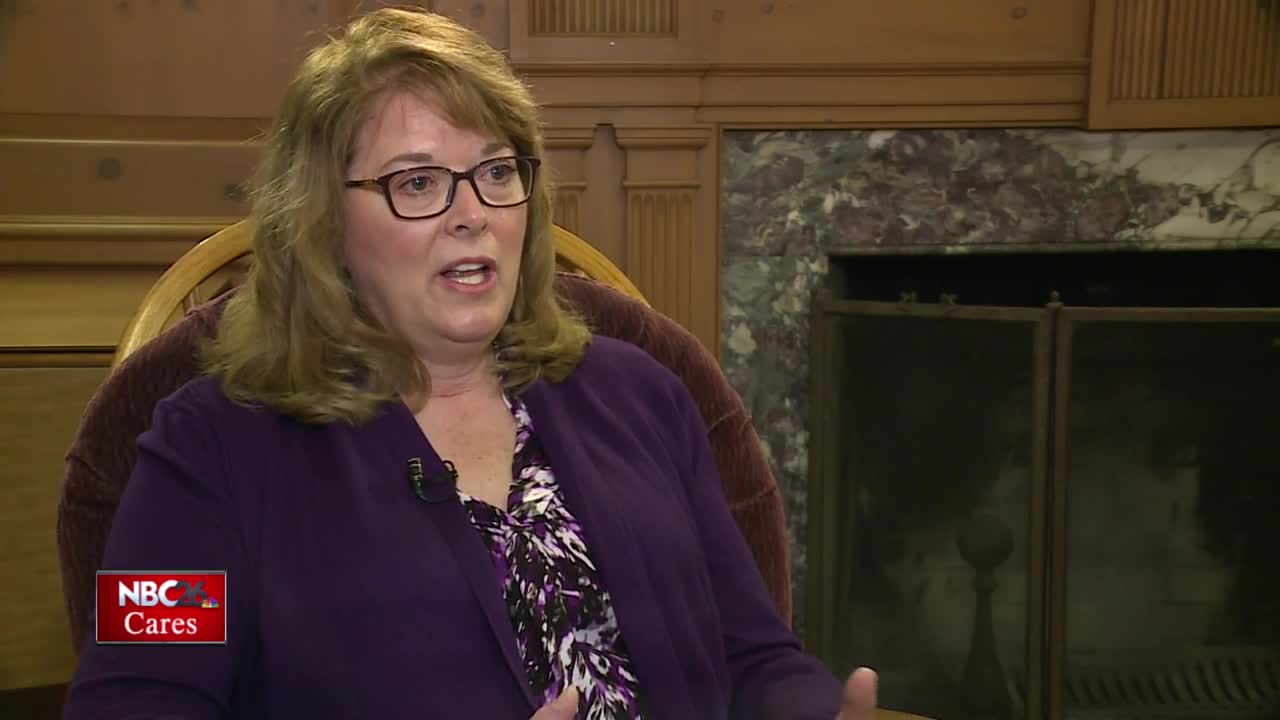 APPLETON, Wis. — Cindy Reffke describes March 3, 2008 as "the saddest moment of my life." It was on that date that her 42-year-old brother-in-law, Rick Reffke, took his own life.

"Suicide takes you right to your knees," she explained. "And from that point on, I decided that I needed to help other families, so perhaps they wouldn't have to feel the way we did."

Cindy, who is a mother, wife and business owner, began volunteering with the non-profit Prevent Suicide Fox Cities. As the Board Chair, she manages the organization while also co-facilitating support groups for those who are grieving.

Cindy, who is also a Rotarian, spearheaded a memory tree project. As a result of her efforts, 23 trees were planted in three Town of Greenville parks last year. Each tree has a plaque with the name of a person who died by suicide. It's a place families can go to remember their loved one.

While Cindy helps people on their path to healing, her other focus is suicide prevention. She was recently certified as a QPR instructor, so she trains others on the 'Question, Persuade and Refer' intervention technique.

Cindy also brings her message to schools, businesses and organizations.

"If I'm asked to speak, even though sometimes it's difficult, I go wherever I'm asked, because knowledge is power."

It was through a speaking engagement at Little Chute High School that the idea was born to hold a mental health wellness festival last fall to connect students with suicide prevention resources in the community and teach them how to better take care of themselves and others.

"If we can build that hope and resiliency in a high school student and help them to realize that they're the caregiver of their mental health, that's huge."

The event was such a big success, Cindy just brought it to Crivitz and is now working with Appleton West High School staff and students to hold a festival there on Monday, May 20th. Students will attend during the school day. Then, everyone in the community is invited to the football field from 5:00pm-8:00pm. There will be booths, obstacle courses, inflatables, Journey Together Service Dogs, speakers and much more.

Appleton West Junior Pa Voua Yang, who will have an activity at the event, believes the festival will help start a community conversation about suicide. "I think it's very important because not a lot of people talk about it, or they don't seek help if they need it, so this is just bringing more awareness."

Appleton West Senior Shampain Turner Jordan added, "We just want to be here for support and just not let them think that they're going through everything by themselves."

Through all these programs, Prevent Suicide Fox Cities Board Member Polly Hietpas estimates Cindy has touched thousands of lives. It's Cindy's hard work and dedication that inspired Hietpas to nominate Cindy for the Janet Berry Volunteer of the Year Award through the Community Foundation for the Fox Valley Region's 22nd Annual Celebrating Volunteers Community Gala.

She estimates that Cindy, who's also a mom, wife and business owner, volunteers 100 hours per week to Prevent Suicide Fox Cities.

"She is absolutely making a difference," Hietpas explained. "Always ready to just share her knowledge and her hope and her dream for the future. She wants everybody to live."

Cindy said she's humbled to have won the award sponsored by The Post-Crescent.

"Just to be recognized as the Volunteer of the Year, it's kind of hard to get your arms wrapped around that, but it it's really such an honor."

Cindy will receive the award during the Celebrating Volunteers Community Gala on May 1st from 5:15pm-8:00pm at the Red Lion Hotel Paper Valley in downtown Appleton. The deadline to register is April 19th.

Cindy is giving her $5,000 prize from the award to Prevent Suicide Fox Cities to help bring mental health wellness festivals to more communities, as well as print more T-shirts with their slogan "Tell Someone. I'll Listen. Tell Me."

NBC26 is proud to be a partner for this year's Community Gala.