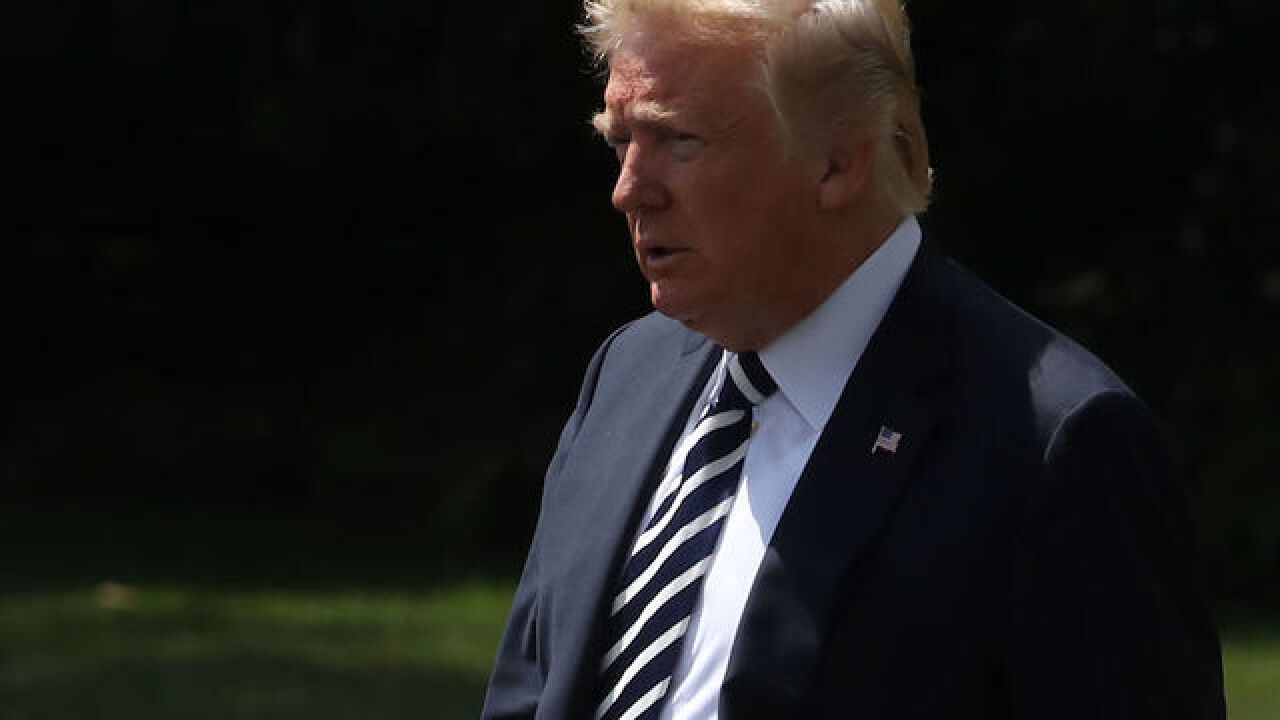 Image copyright 2018 Getty Images. All rights reserved. This material may not be published, broadcast, rewritten, or redistributed.
Mark Wilson
<p>U.S. President Donald Trump walks toward Marine One while departing from the White House on August 31, 2018 in Washington, DC. President Trump is traveling to Charlotte, North Carolina. </p>

President Donald Trump on Monday blasted his Attorney General Jeff Sessions and lamented the indictments of two lawmakers who were his earliest supporters in Congress during the 2016 election, suggesting they should not have been charged because they are Republicans.

A decision by the Justice Department to hold off on prosecuting two Republican congressmen up for re-election in order to help them win would have been highly unethical and a blatantly politically motivated violation of the department's nonpartisan mission. The comment on Monday was the latest indication that Trump, who ran on a pledge to "drain the swamp," believes his political allies should be immune from prosecution, regardless of the evidence stacked against them.

The Justice Department declined to comment on the President's tweets.

The tweet marked Trump's latest attack on the Justice Department, which has a long history of carrying out investigations and pursuing indictments in a nonpartisan fashion. Federal prosecutors are strongly admonished not to let politics affect charging decisions in the way the President advocated on Monday.

"Politics must play no role in the decisions of federal investigators or prosecutors regarding any investigations or criminal charges. Law enforcement officers and prosecutors may never select the timing of investigative steps or criminal charges for the purpose of affecting any election, or for the purpose of giving an advantage or disadvantage to any candidate or political party," reads a 2016 Justice Department memorandum issued by then-Attorney General Loretta Lynch, which mirrors language issued by previous attorneys general ahead of federal elections.

Rep. Duncan Hunter, R-California, and Rep. Chris Collins, R-New York, were indicted within two weeks of each other last month on unrelated charges.

Hunter was indicted for using campaign funds for personal use and were charged with counts of wire fraud, falsifying records, campaign finance violations and conspiracy.

Both lawmakers have pleaded not guilty.

Under long-standing Justice Department custom, prosecutors generally avoid public disclosure of overt investigative steps involving a candidate for office or election matters within 60 days of an election.

But the so-called, 60-day rule is not an official regulation or found in any federal statute. Instead, it's up to prosecutors to use their best judgment and, above all else, make sure that political considerations play no role in investigative decisions.

Republican congressional leadership considered the charges serious enough to move to strip both men of their committee assignments. Collins suspended his campaign days after he was indicted, while Hunter is continuing to campaign for re-election.

The tweet was just the latest instance in which Trump has defended one of his political allies despite significant evidence of wrongdoing and a federal prosecution. Trump also defended his former campaign chairman Paul Manafort and insisted he was unfairly treated, even after Manafort was found guilty on eight counts of financial crimes.

While Trump suggested the investigations into the two lawmakers began during the Obama administration, the charges against Collins stem from actions he allegedly took last year -- including calls he placed while at the White House for a congressional picnic hosted by Trump.

The tweet also amounts to Trump's latest broadside against his attorney general, whose recusal from the investigation into Russian interference in the 2016 campaign Trump has refused to forgive and continued to fume about.

"The Dems all hated him, wanted him out, thought he was disgusting UNTIL I FIRED HIM! Immediately he became a wonderful man, a saint like figure in fact. Really sick!" Trump tweeted.