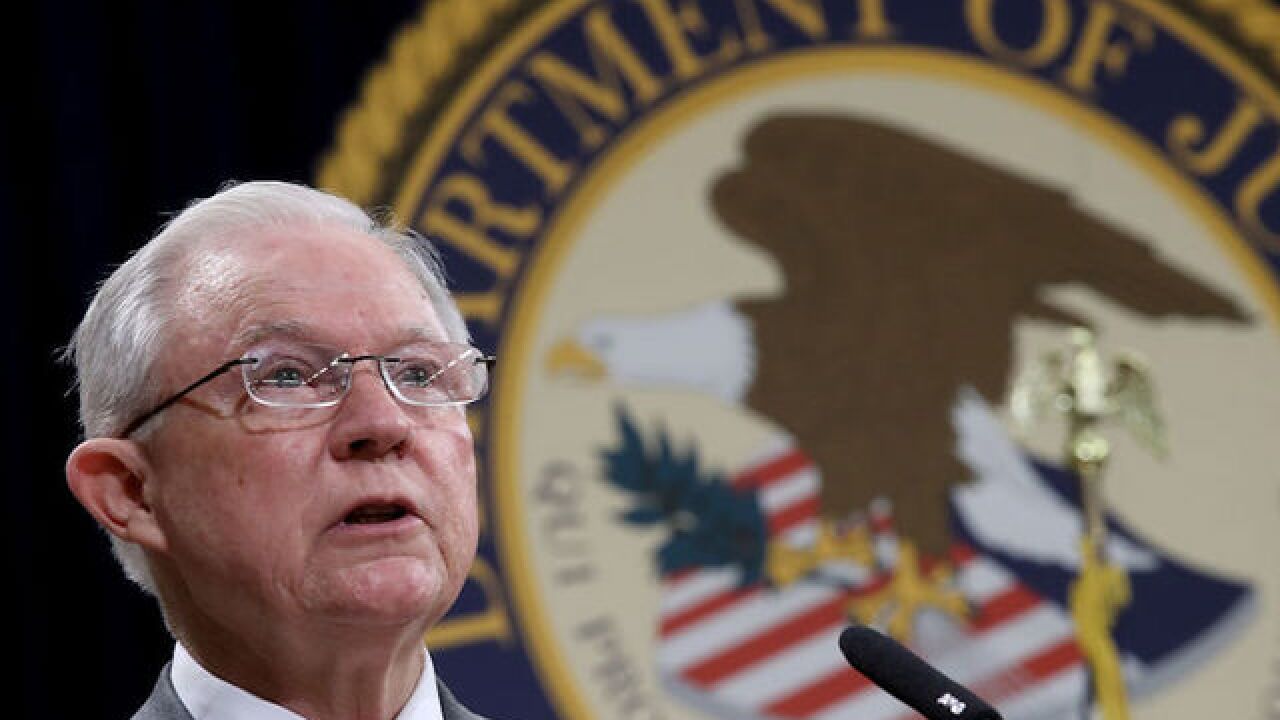 Image copyright 2018 Getty Images. All rights reserved. This material may not be published, broadcast, rewritten, or redistributed.
Win McNamee
<p>U.S. Attorney General Jeff Sessions speaks at the Religious Liberty Summit at the Department of Justice July 30, 2018 in Washington, DC. </p>

The attack on the attorney general came as Trump claimed the news media "refuses to report" on meetings held between Christopher Steele, the ex-British intelligence officer who authored an opposition research dossier on Trump, and former Associate Deputy Attorney General Bruce Ohr.

Ohr was demoted from his position in the deputy attorney general's office after the discovery of certain meetings he held with Steele and the head of the opposition research firm that hired him to compile the dossier, Fusion GPS founder Glenn Simpson, CNN reported last year, citing a source familiar with the matter. Ohr's wife, Nellie Ohr, worked for Fusion GPS doing research and analysis on Trump, Simpson has disclosed.

"The big story that the Fake News Media refuses to report is lowlife Christopher Steele's many meetings with Deputy A.G. Bruce Ohr and his beautiful wife, Nelly. It was Fusion GPS that hired Steele to write the phony & discredited Dossier, paid for by Crooked Hillary & the DNC....," Trump wrote on Saturday.

The President followed up with a second tweet, saying, "....Do you believe Nelly worked for Fusion and her husband STILL WORKS FOR THE DEPARTMENT OF "JUSTICE." I have never seen anything so Rigged in my life. Our A.G. is scared stiff and Missing in Action. It is all starting to be revealed - not pretty. IG Report soon? Witch Hunt!"

The Department of Justice declined to comment on the President's tweets.

The Nunes memo, released in February, argues that information from Bruce Ohr, including that his wife was employed by Fusion GPS, should have been disclosed to the US Foreign Intelligence Surveillance Court.

A Democratic House Intelligence Committee rebuttal memo from Rep. Adam Schiff, the panel's top Democrat, argues, however, that Ohr's role was mischaracterized in the Nunes memo and his interactions with Steele were overstated.

"The Majority describes Bruce Ohr as a senior DOJ ofﬁcial who 'worked closely with the Deputy Attorneys General, (Obama appointee Sally) Yates and later (Trump appointee Rod) Rosenstein,' in order to imply that Ohr was somehow involved in the FlSA process, but there is no indication this is the case," the Schiff memo states.

Judicial Watch, a conservative watchdog group, announced Thursday that it is suing the Justice Department to obtain internal communications related to the Ohrs, Steele and Fusion GPS.

Trump's attacks on his attorney general have been a common refrain of his presidency, and he has repeatedly criticized Sessions for recusing himself from oversight of the Russia investigation.

Earlier this month, Trump called on Sessions to shut down special counsel Robert Mueller's investigation into Russian interference in the 2016 election. Trump's Twitter post came as his lawyers continued to negotiate with the special counsel about the parameters of a potential presidential interview in that probe and raised fresh questions about whether the President was attempting to obstruct justice.

Trump attorney Rudy Giuliani later tried to downplay the President's tweet as merely expressing an opinion, not giving an order.

"The President was expressing his opinion on his favorite medium, Twitter, for asserting his first amendment rights," Giuliani told CNN's Dana Bash at the time.