This rare fish weighs more than a car, and it just washed up on an Australian beach 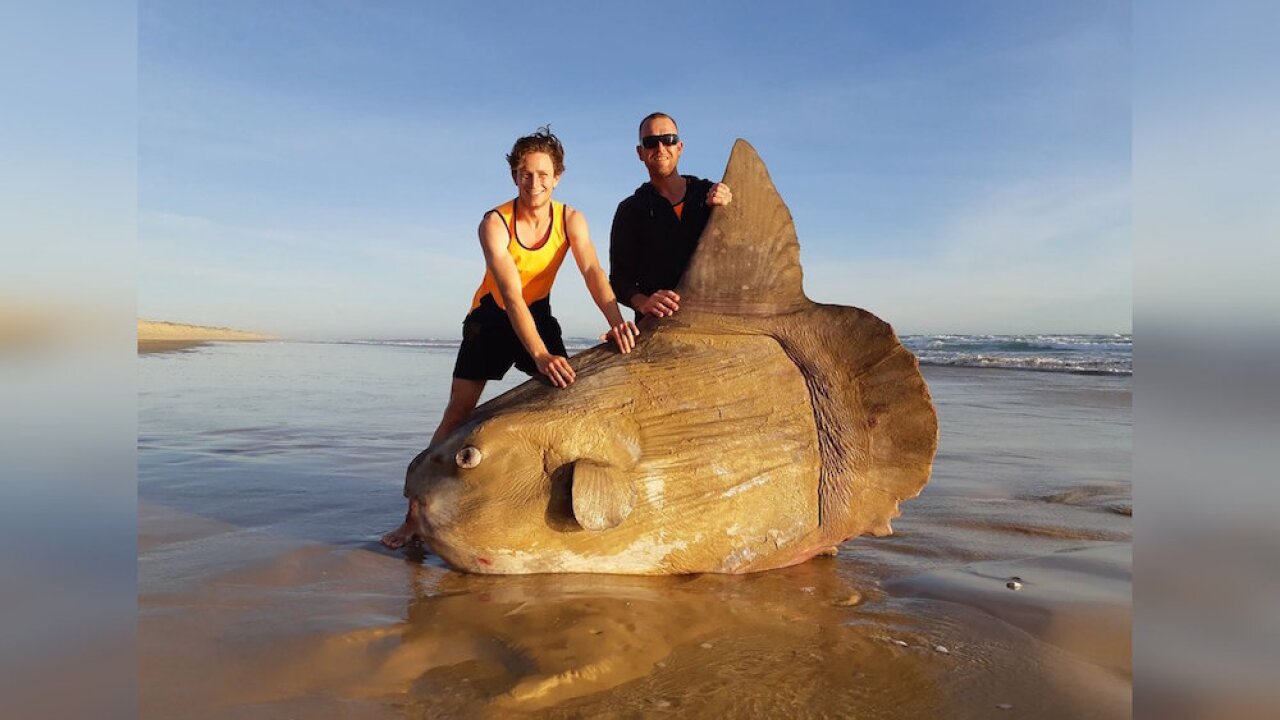 A weird-looking, enormous sunfish was discovered by two fishermen on the shore at Coorong National Park in South Australia over the weekend.

The ocean sunfish (Mola mola) was spotted at the mouth of the Murray River by Steven Jones, the supervisor of a cockle fishing crew, and his colleague Hunter Church.

"He thought it was a piece of driftwood as they were driving past on the work truck," Jones' partner Linette Grzelak, who posted the photos of the fish on Facebook, told CNN. "None of them had seen anything like this before."

"They find all sorts of sea life along the beaches they dig but it has been mostly sharks and seals. This was something very different," Grzelak added.

"Steven said it was extremely heavy and its skin was leathery like a rhinoceros."

National Parks South Australia said these sunfish are the world's largest bony fish and they can weigh more than a car.

The Mola mola, discovered and named only in 2017, feeds largely on jellyfish and can grow well over 2 meters (more than 6 feet) -- although this one was "only" 1.8 meters long, putting it on the smaller end of the scale, according to the South Australian Museum .

"The Mola mola is known for its large size, odd flattened body shape and fins," the museum's fish collection manager Ralph Foster told CNN via e-mail. He added that he was able to identify the fish from the markings on its tail and the shape of its head.

Foster added that the fish is also known as a sunfish because it enjoys basking in the sun. Their size and sun bathing habit mean they can be hit by boats, and some are so large they actually sink yachts, he said.

"Researchers have been putting satellite tags and data loggers on these fish and found they will come to the surface and lay on their side on the surface, hence the name the sunfish," Foster said. "Once they are warm enough they dive down several hundreds of meters and feed on jellyfish and stay down there for lengthy periods of time."

"We know very little about them. It's only in the last few years that technology has allowed us to start learning about them," Foster explained.

"The fish was thought to be a purely Southern Hemisphere species but just a couple of weeks ago one made the news when it turned up on a Californian beach, highlighting how little we know about sunfish in general."

The museum said there's no way of knowing why this specimen died.