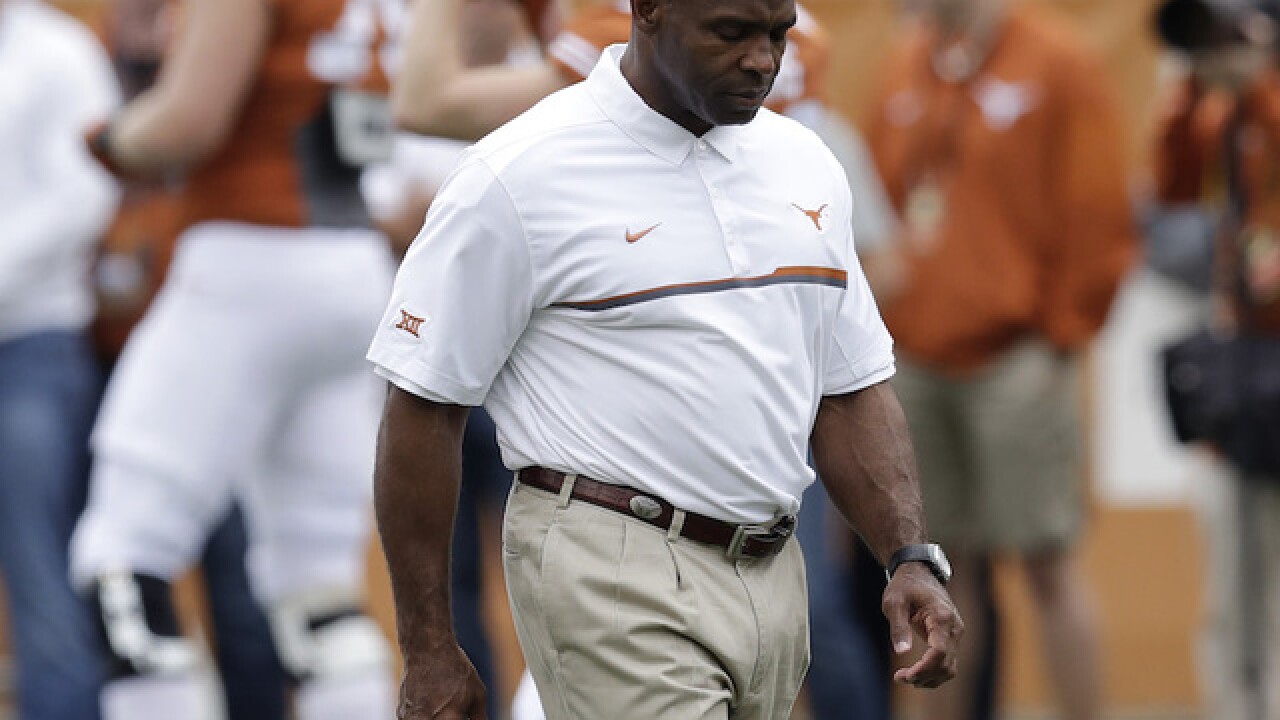 The first black coach in the history of the proud program was fired Saturday with a 16-21 record in three seasons. Strong had two years left on a guaranteed contract that pays more than $5 million per year, but was the first coach in Texas history with three consecutive losing seasons.

Reports that he would be fired swirled after a late-season loss to lowly Kansas, and school officials made it official after Friday's 31-9 loss to TCU meant Texas would finish 5-7 without a bowl game for the second straight year.

"Charlie Strong is an outstanding leader and role model who worked hard with great integrity to move Longhorn football in the right direction," university President Greg Fenves said in a statement on Saturday. "In the end, the results over three seasons were not there. It was not clear the future was going to be at the levels expected of Longhorn football."

Texas moved quickly to replace him. Less than two hours after Strong was dismissed, a person with direct knowledge of the discussions told The Associated Press that Houston's Tom Herman had informed the school he was leaving to become the Longhorns' new coach. The person spoke to the AP on condition of anonymity because neither school had yet announced the move publicly.

Strong's tenure was notable at first for his disciplinarian style and "core values" code of conduct. But the losses quickly mounted and Texas struggled just to qualify for bowl games despite recruiting classes hailed as some of the nation's best. Texas had hoped for a turnaround this season after a 2-0 start, but a three-game losing streak and a 0-2 start in the Big 12 quickly followed.

Strong was a landmark hire for Texas in 2014, an up-and-comer who had earned his shot at one of the nation's top programs after a four-year record of 37-15 at Louisville.

His arrival on campus wasn't just about football , but also confronting the university's long history of segregation and racism. Until 2010, a campus dorm was named after a past leader of the Ku Klux Klan. And a statue of Confederate President Jefferson Davis stood in the shadow of the central campus clock tower from 1930 until student protests forced its removal in 2015.

Strong's hiring was a social leap forward, but his short tenure was marked by turmoil, losing football and a divided fan base.

That he lasted three years showed remarkable restraint for a school that forced out Mack Brown in 2013, eight years after he won a national title, once the Longhorns came up just short of sharing the Big 12 championship.

"When I took this job three years ago, I came here to win the national championship, and I came here to change lives," Strong said after the loss to TCU. "''I was told when I came in three years ago to build a program. The wins and losses don't add up, but it's more than that ... (It's) taking the program in the right direction."

Many of Strong's players had hoped he would get another year.

"We've been blessed to have him," freshman quarterback Shane Buechele said Friday night. "No one wants him to leave. Everybody wants him to stay."

Shortly after the decision to fire Strong was announced, defensive lineman Charles Omenihu tweeted, "I love you coach."

The question for Texas now is a new leader of a program that its supporters believe belongs among the nation's elite, despite a long track record of mediocrity. As Strong's future became increasingly unclear, Houston's Tom Herman emerged as a leading candidate in multiple reports about the Texas job.

Strong grabbed national attention when he arrived and immediately announced his "core values" of team rules: honesty, treating women with respect, no guns and no drugs. Within a year, 10 players were dismissed after arrests or rules violations.

But he didn't win enough games at a school that sits in the middle of one of college football's most fertile recruiting grounds and boasts one of the wealthiest athletic programs in the country with its own ESPN-partnered television network. While some blamed Brown for leaving the program in shambles, Strong's lineups were still peppered with future NFL talent.

Strong also made a promise he couldn't keep. In November 2014, the Longhorns were 6-5 and already qualified for a bowl when he promised a five-loss season will "never happen again." Two more immediately followed, and the rest of his tenure was marked by blowout losses, blown leads and excruciating finishes.

From the start, Strong struggled to win over some influential donors who liked his style but demanded more wins. Shortly after he was hired, Red McCombs, the billionaire businessman who is one of the program's most influential donors, complained that he shouldn't have the job.

The high points for Strong included four straight wins over teams ranked No. 12 or higher in the Top 25. But that success only compounded the frustration over his losses that were too many to overcome.