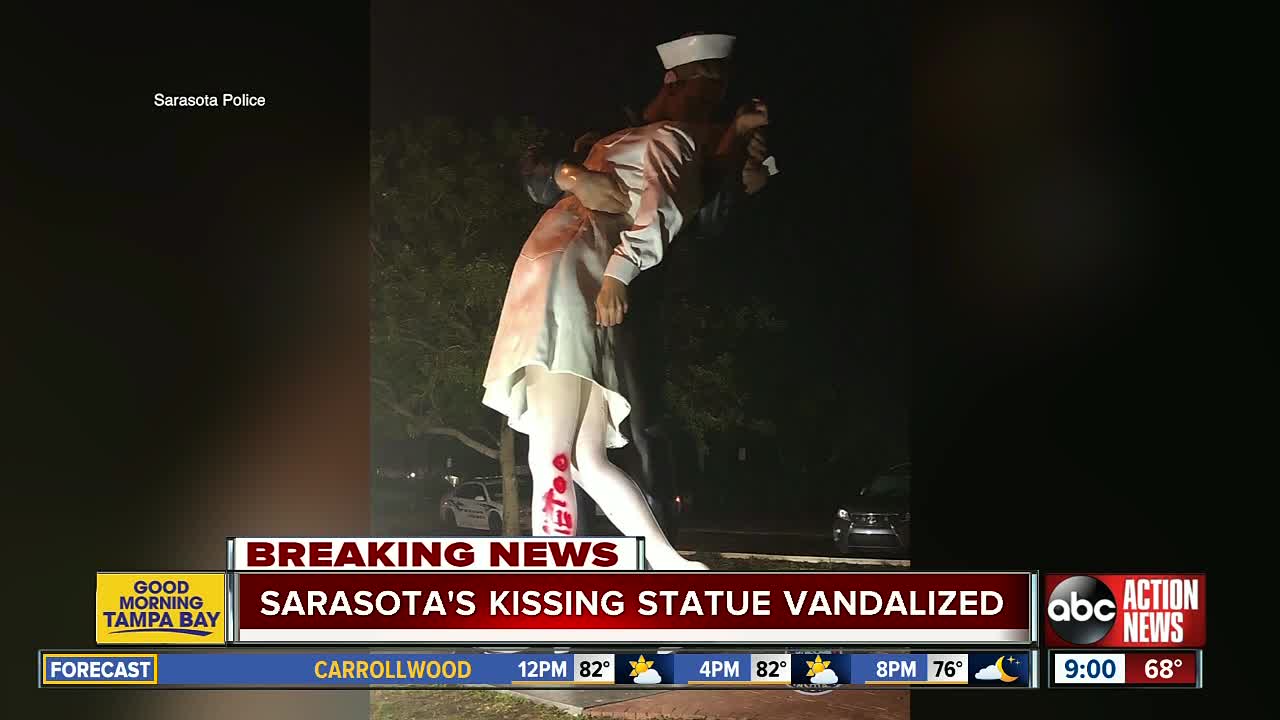 The iconic kissing statue, known as the "Unconditional Surrender" statue, in Sarasota was vandalized less than 24 hours after the passing of the World War II veteran who was identified as the "kissing sailor" in the famous photo that inspired the sculpture. 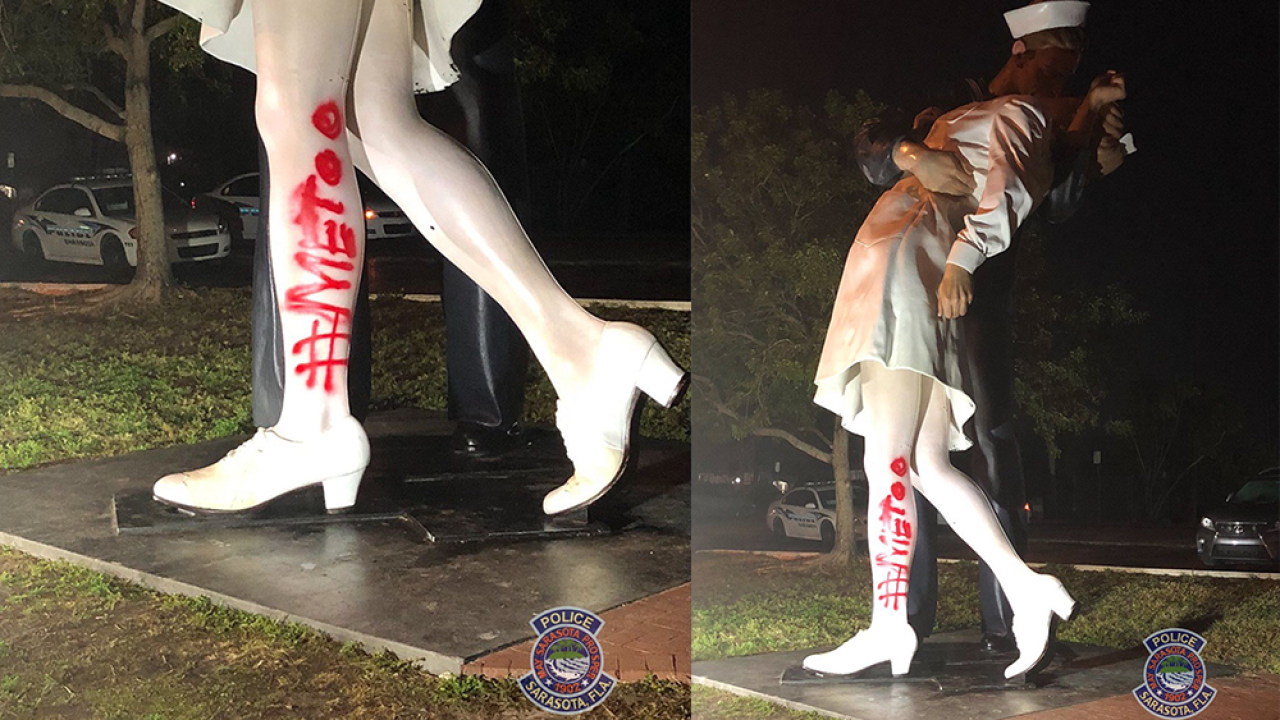 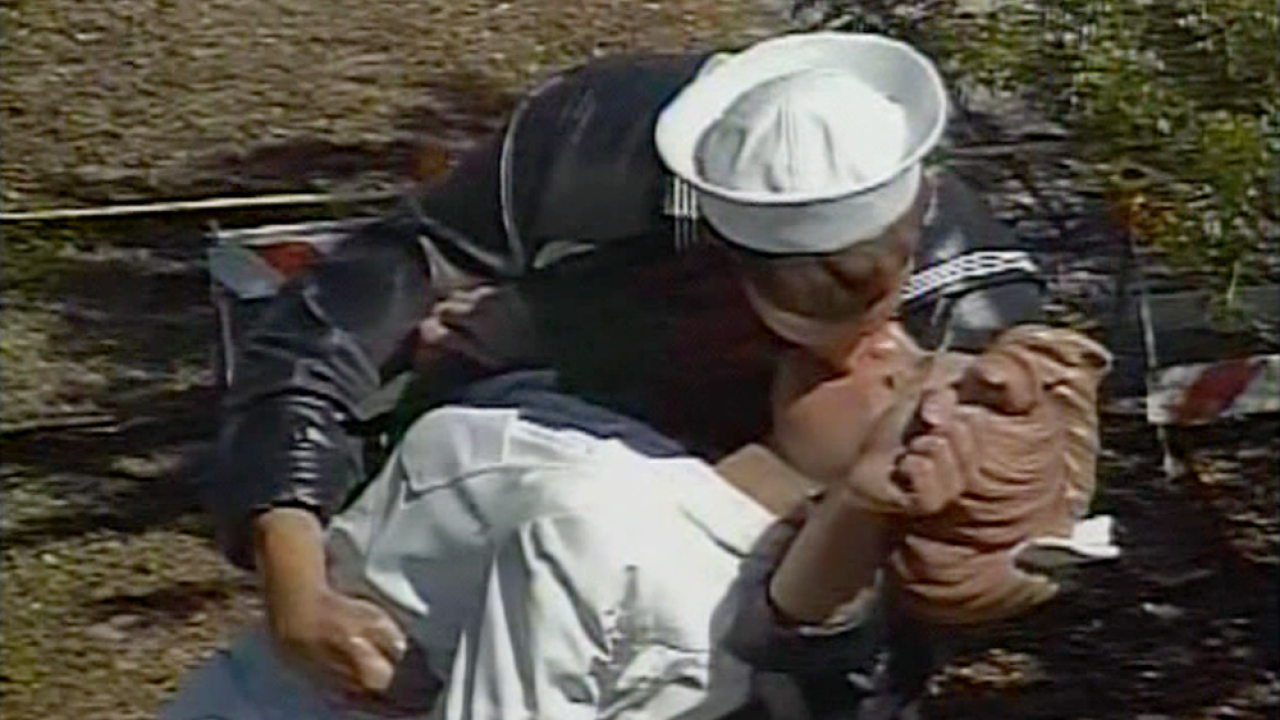 SARASOTA, Fla. — A statue in Florida based on an iconic photo of a sailor kissing a woman on V-J day was vandalized less than 24 hours after it was announced that the World War II veteran who was the subject of the photo had died .

The 26-foot tall statue named "Unconditional Surrender" is located on the Sarasota Bayfront near Marina Jack.

Sarasota Police Department said at approximately 12:53 a.m. on Tuesday, officers were dispatched for a report of an unknown person spray painting the statue.

When officers arrived on scene, they found "#MeToo" had been spray painted on woman's the left leg. Police couldn't find any spray paint bottles in the area and no other objects were found to be defaced or vandalized.

RELATED: Man who claimed to be sailor in WWII Times Square kiss photo dies at 95

"Unconditional Surrender" was originally installed as a temporary exhibition in Sarasota in 2005 and returned to the city in 2009. Similar statues are located in New Jersey, Pearl Harbor, Italy, San Diego and New York City.

For years after it was first published in a full-page spread in "Life," the "kissing sailor" photo was interpreted as a tender moment between two lovers celebrating the end of the World War II. But in recent years, the woman in the photo, Greta Zimmer Friedman, says that's not how things happened.

Friedman later added that it was just "somebody really celebrating."

According to NPR, the man pictured in the photo, George Mendonsa, also confirmed he did not know Friedman.

"It happened. She went her way and I went mine," Mendonsa said.

Mendonsa also once said that he mistook Friedman for a nurse, and that he would "never had grabbed her" if she wasn't wearing a uniform. Friedman was actually a dental assistant.

"I saw what those nurses did that day and now back in Times Square the war ends, a few drinks, so I grabbed the nurse," Mendonsa later said to WPRI-TV in Rhode Island.

Mendonsa died over the weekend at the age of 95. Friedman died in 2016.

There are no available surveillance cameras in the area that could have captured the incident and no known witnesses, according to police.

The approximate damage is estimated to be more than $1,000. Police notified the City of Sarasota Public Works.