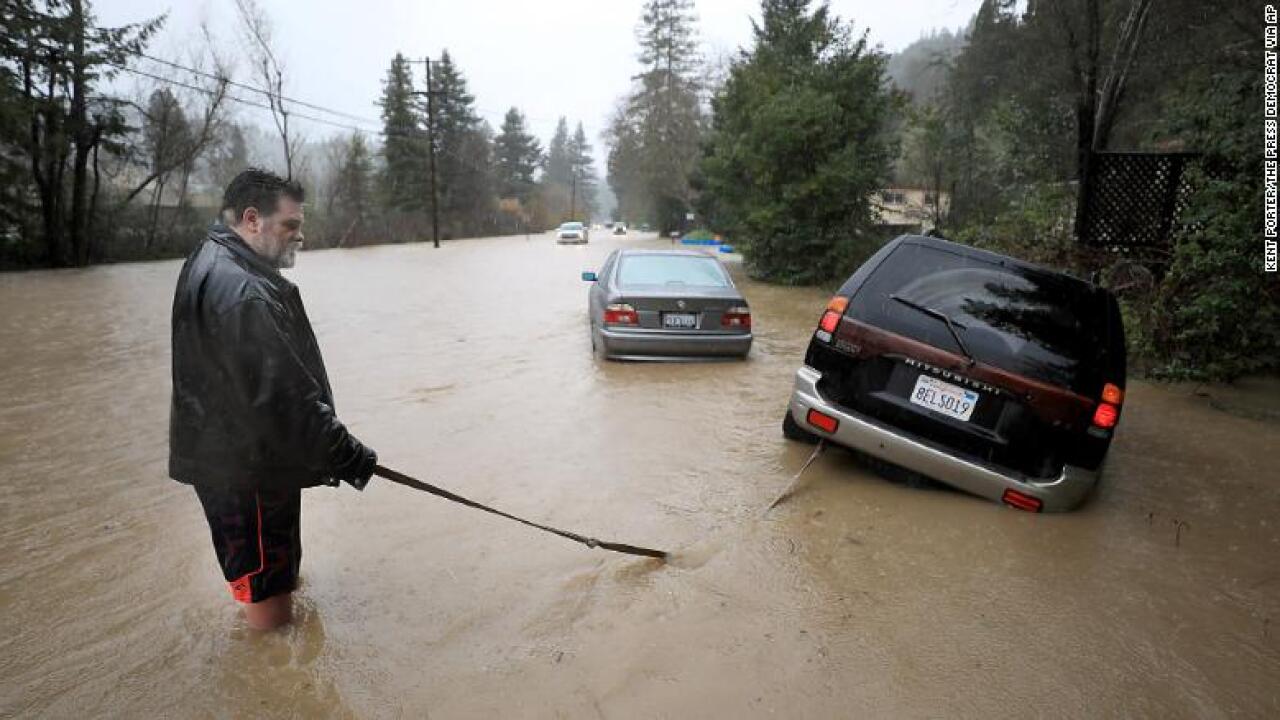 The Northern California town of Guerneville has been turned into an island as the Russian River has risen over 45 feet.

Their homes surrounded by flood waters, they have been moving around on kayaks and canoes.

"The roadways leading into the town along the river and across the river have been cut off by the rising floodwaters," Sonoma County emergency manager Chris Godley said.

Dugan said roughly 2,000 homes and buildings have flooded to some degree. Fifty-nine people so far have been rescued and there are no reported injuries.

Eighty-nine roads remain closed in the county. Officials said they are in the planning stages to allow people to re-enter as early as Friday, Dugan said.

"It is incredibly flooded. It is really nuts. You see just the rooftops popping over on the side of the road," Joe Pease, a county employee who delivered sandbags to firefighters but had to stop because of deep water, told CNN affiliate KGO.

The river was 13 feet above flood stage by Wednesday evening, and county officials issued an emergency declaration.

They have requested Gov. Gavin Newsom issue a state of emergency, to help local authorities by expanding available resources.

"(The proclamation) is not just a sign that we have insufficient resources or we're overwhelmed, but instead that we recognize the true potential worst-case scenario here and we want to make sure that we're mobilized effectively and fully to deal with that threat," Godley said.

"I have lived here in this area for the last 10 years and this is the highest I have ever seen it," said Zak Wood, who lives in Forestville, which is about a mile from the river.

Officials expect the river to drop precipitously Thursday and Friday. The record river height is 49.5 feet.

Not every road in Guerneville was under water -- a few were still passable, and now lined by cars and trucks from owners who found the higher ground.

KGO reported that one hotel popular with wine enthusiasts was evacuated.

The town was the worst hit by flooding, but not the only one.

The sheriff tweeted a photo of part of a road in Monte Rio, about 5 miles away, deluged by water.

About 20 miles upriver, musician Garrett Pierce posted a video of the Healdsburg Memorial Bridge on Wednesday. Water rushes under the truss bridge, close to the spans. The video shows some breaks in the clouds.

More rain is forecast through Sunday -- except on Thursday. A flood warning is in effect for parts of the area, the weather service said. A flood warning means flooding is imminent or occurring; a watch indicates potential for flooding based on forecasts.