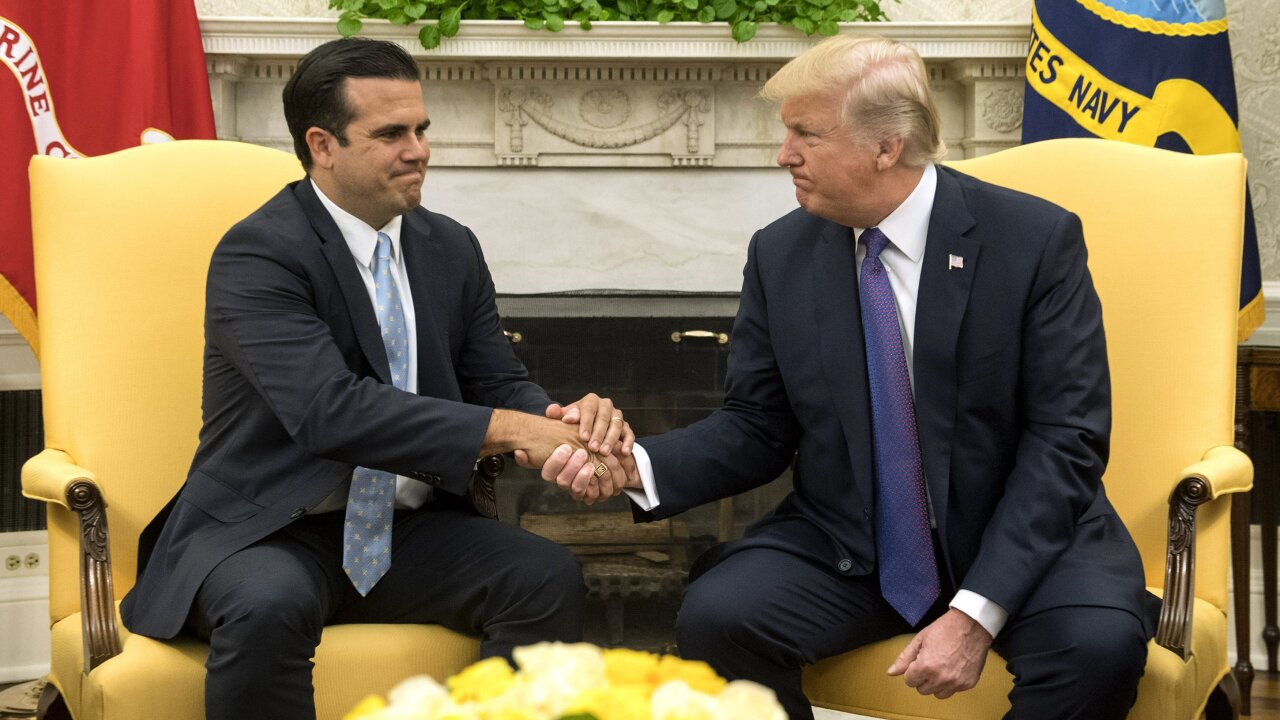 Tensions are escalating between President Donald Trump and Puerto Rico's governor over disaster relief efforts that have been slow in coming for the still-battered island after Hurricane Maria.

In an exclusive interview with CNN, Puerto Rico Gov. Riacardo Rosselló said he would not sit back and allow his officials to be bullied by the White House.


"If the bully gets close, I'll punch the bully in the mouth," Rosselló said. "It would be a mistake to confuse courtesy with courage."

Rosselló's top aides told CNN that during a tense encounter at the White House on Wednesday they were warned by senior White House officials that representatives for the US territory were pushing too hard to arrange a meeting aimed at discussing the island's dire situation with the President.

Despite their requests, Trump has declined to schedule a meeting with Rosselló to discuss recovery efforts that are ongoing nearly two years after the storm hit.

According to Puerto Rican officials, White House trade adviser Peter Navarro, along with other senior officials, all but threatened the island's representatives during the meeting.

"You guys have to f---ing stop with the meeting request," one official said, according to the Puerto Rican officials.

"Your governor is f---aasaaang things up," Navarro added, according to sources at the meeting.

A White House official denied that Puerto Rican officials were told to stop requesting a meeting with the President. And a spokesman said the administration would continue working with Rosselló and his aides on recovery efforts. But he stopped short of saying definitively the President would meet with the governor in the future.

"The White House recently helped set up important meetings between Governor Rossello and HUD and FEMA leadership. We understand that the governor is not visiting until later in April and we look forward to once again helping set up productive conversations with Administration leaders to discuss the island's recovery," the spokesman Judd Deere said.

The battle this week between the White House and Rosselló's office erupted after it was reported Trump told Republican senators on Capitol Hill that he questioned the wisdom of directing more storm relief aid to Puerto Rico, despite the fact that billions of dollars in funds have already by authorized by Congress.

In the closed door meeting with Senate Republicans, Trump went out of his way to point out the totals of disaster relief aid that has been distributed in the wake of a series of storms and hurricanes in 2017. It is a pet issue Trump has had for months -- mentioning Puerto Rico's finances and total disaster relief in negative terms repeatedly in meetings with lawmakers and staff as they've worked through iterations of the next disaster relief bill.

"The point was - are we spending the money wisely?" Sen. Lindsey Graham, a South Carolina Republican said. "I have nothing against helping the people of Puerto Rico, but we have got to spend the money wisely."

While Congress has appropriated almost $20 billion in disaster funds from the Department of Housing and Urban Development, only a small fraction of that -- $1.5 billion -- is approved for actually spending. Legislation that would send more funds to the island as part of a larger disaster relief package has been tied up in the Senate.

White House officials did not deny Trump's remarks to Republican senators, and defended the administration's handling of disaster relief funds for the island.

"The Trump administration is committed to the complete recovery of Puerto Rico. The island has received unprecedented support and is on pace to receive tens of billions of dollars from taxpayers," White House spokesman Judd Deere said in a statement.

"However, the Trump administration will not put taxpayers on the hook to correct a decades old spending crisis that has left the island with deep-rooted economic problems," Deere added.

Rosselló said the President is working off of bad information provided by White House officials.

"It's unfortunate that we are having to hear this. These statements lack empathy, but more so they lack the true facts of the matter," Rosselló said in response to Trump's comments. "They're not aligned with the truth and reality, No. 1. And No. 2, I just think we have to end this battle of words and just recognize we're not his political adversaries, we're his citizens," the governor added.

Rosselló is in Washington to meet with lawmakers as part of a new push for statehood for Puerto Rico, a move the governor sees as necessary in order for the island to have the leverage it needs to expedite recovery money for the territory.

Trump has complained that Puerto Rico is wasting the money it has already received, an assertion that Rosselló insists is flat wrong.

"He treats us as second class citizens, that's for sure," he said. "And my consideration is I just want the opportunity to explain to him why the data and information he's getting is wrong. I don't think getting into a kicking and screaming match with the President does any good. I don't think anyone can beat the President in a kicking and screaming match. What I am aiming to do is make sure reason prevails, that empathy prevails, that equality prevails, and that we can have a discussion."
aaaaaaaaa