Psychiatrist: History of violent behavior a factor in gun violence 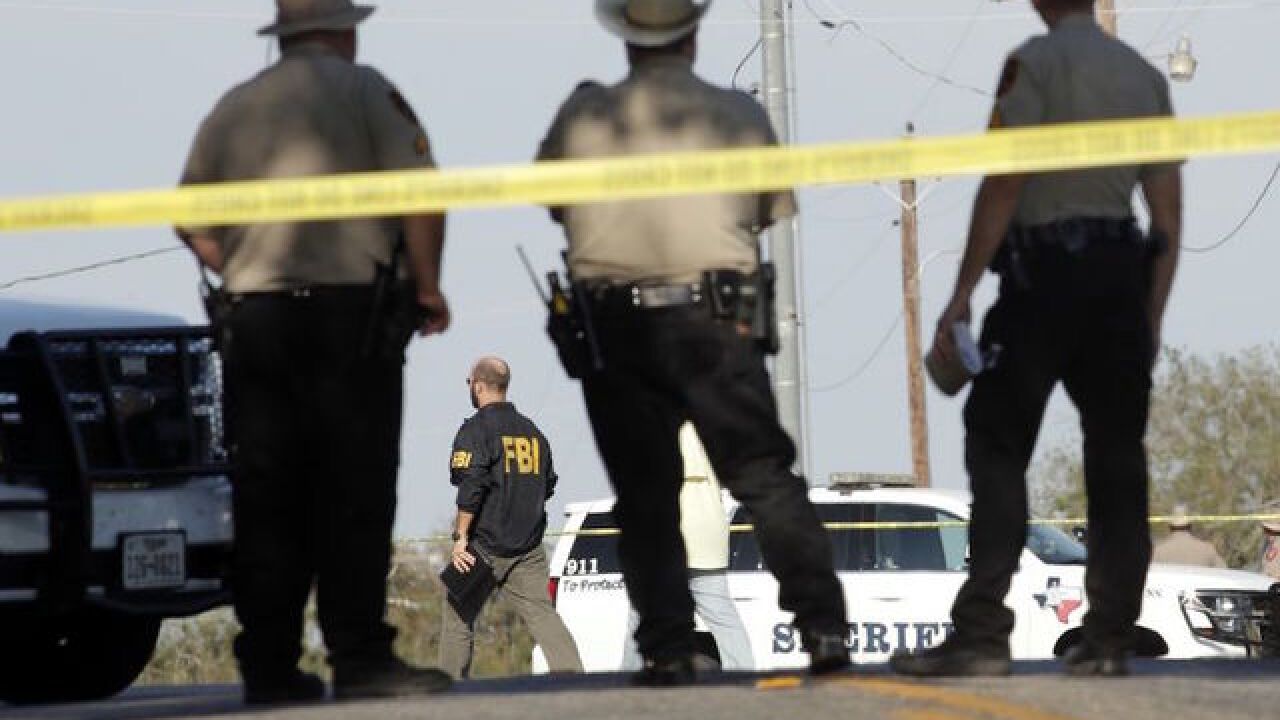 Copyright Getty Images
Erich Schlegel
<p>Law enforcement officials gather near the First Baptist Church following a shooting on November 5, 2017 in Sutherland Springs, Texas. At least 20 people were reportedly killed and 24 injured when a gunman, identified as Devin P. Kelley, 26, allegedly entered the church during a service and opened fire. </p>

According to President Donald Trump, the tragic Texas church shooting that left 26 people dead was "a mental health problem at the highest level."

If you ask mental health researchers, such mass shootings are much more complicated than that.

On Sunday, 26-year-old Devin Kelley sprayed bullets across the sanctuary of First Baptist Church in Sutherland Springs, Texas, about 30 miles east of San Antonio. The youngest killed at the church was 17 months old; the oldest was 77 years old.

"We have a lot of mental health problems in our country, as do other countries, but this isn't a guns situation," Trump said during a joint news conference Monday in Tokyo.

"This is a mental health problem at the highest level," he said. "It's a very, very sad event."

Trump's response to the Texas church shooting echoed previous comments he has made on gun violence. In 2015, Trump said he was opposed to tightening gun laws in the United States but was in favor of addressing mental health to prevent shootings.

Yet various epidemiological studies over the past two decades show that the vast majority of people with severe mental illnesses, such as schizophrenia, bipolar disorder or severe depression, are no more likely to be violent than anyone else.

Rather, people with severe mental illnesses are more than 10 times more likely to be victims of violent crime than the general population. And, only about 3% to 5% of violent acts can be attributed to individuals living with a serious mental illness, according to the US Department of Health and Human Services.

But those statistics have "almost nothing to do with mass casualty shootings," said Jeffrey Swanson, a professor in psychiatry and behavioral sciences at Duke University who specializes in gun violence and mental illness.

So exactly how are mental health and gun violence intertwined, and what is needed to end the violence?

There's no doubt that America's systems of care for mental health are overburdened, expensive and inaccessible for many who need them, he said. But when it comes to gun violence among this community, suicide tends to occur at higher rates than homicides, he said.

"If we back up and think about firearm-related injuries and mortality as a public health problem, it turns out there is a mental health-related story, and it's suicide," he said. "If we had better mental health care and could get people better access and break down barriers to care, then yes, we might reduce gun violence by a lot but it would be from reducing suicides."

Otherwise, mental illness is just one "highly unspecific" factor that may contribute to gun violence, along with being young, white and male, or a history of violence, Swanson said.

Instead of policies that restrict gun access based solely on mental illness diagnoses or because a person has made contact with the judicial system or health care agencies due to mental illness, the American Psychological Association, the National Alliance on Mental Illness and other advocacy groups have called for gun access criteria based on more subtle indicators of potentially dangerous behavior.

Those indicators -- such as having past or pending violent misdemeanor convictions or charges, domestic violence restraining orders or multiple DUI convictions -- have been largely informed by the work of Swanson and others.

"A history of violent behavior is a far better predictor of future violence than mental illness," he said.

Calling gun violence a mental health issue is to scapegoat and stigmatize people with mental illness, he said.

"It's kind of a canard, a convenient explanation that exploits the tremendous fear people have with these horrifying mass shootings," he said. "If people fear those with mental illness they're going to treat them with scorn and support public policies that restrict their liberties."

After all, mental illness affects millions of adults across the country.

In 2015, there were an estimated 43.4 million adults in the United States with some form of mental illness within the past year, which represented 17.9% of adults nationwide, according to the National Institute of Mental Health .

"Reducing the incidence of gun violence will require interventions through multiple systems, including legal, public health, public safety, community, and health. Increasing the availability of data and funding will help inform and evaluate policies designed to reduce gun violence," according to the association's website.

Swanson and his colleagues examined the proportion of people in the United States with impulsive angry behavior who own or carry guns and have a diagnosable mental illness in a paper published in the journal Behavioral Sciences & the Law in 2015.

They conducted household surveys with 9,282 people from February 2001 to April 2003, excluding people who carried guns for work, resulting in a response rate of 70.9%.

An analysis of the survey results estimated that nearly one in 10 adults has access to firearms and has a problem with anger and impulsive aggressive behavior.

These people were more likely to be male, younger and married and to live in outlying areas around metropolitan centers rather than in central cities, Swanson and his colleagues wrote in their paper.

They were significantly more likely to meet diagnostic criteria for a wide range of mental disorders, including depression, bipolar and anxiety disorders, PTSD, intermittent explosive disorder, pathological gambling, eating disorder, alcohol and illicit drug use disorders, and a range of personality disorders.

What's more, despite evidence of "considerable psychopathology" in many of these respondents, only a very small proportion, 8% to 10%, were ever hospitalized for a mental health problem.

"Because only a small proportion of persons with this risky combination have ever been involuntarily hospitalized for a mental health problem, most will not be subject to existing mental health-related legal restrictions on firearms resulting from a history of involuntary commitment," Swanson and his colleagues wrote in the paper's abstract .

As for Texas gunman Kelley, the state denied him a license to carry a gun, Gov. Greg Abbott said, citing the director of Texas' Department of Public Safety.

"So how was it that he was able to get a gun? By all the facts that we seem to know, he was not supposed to have access to a gun," Abbott told CNN's Chris Cuomo. "So how did this happen?"

On Monday, Trump said his "thoughts and prayers" were with the victims and their families but did not suggest plans to take any legislative or other policy action to address the shooting.