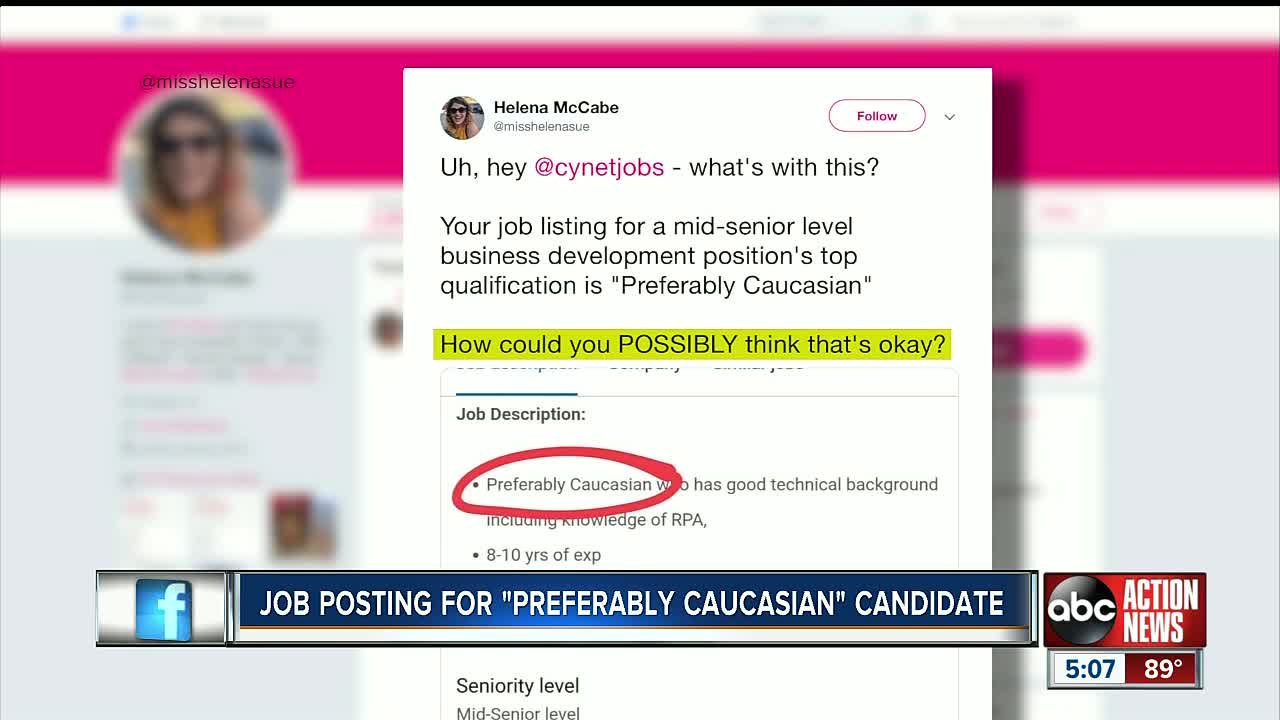 A local company is gaining national attention for all the wrong reasons. 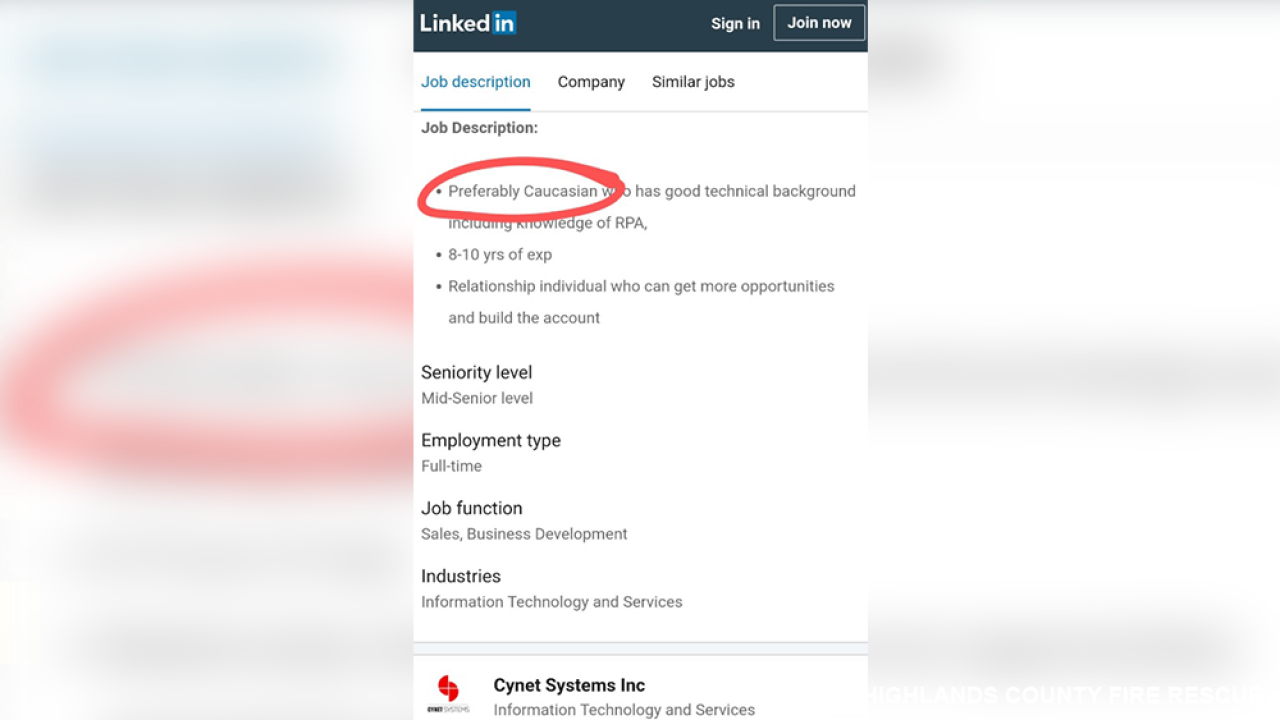 TAMPA, Fla. -- ‘Preferably Caucasian,’ that’s what one job ad announced it was looking for in an online listing.

Cynet Systems, a recruiting company based out of Virginia, posted a job seeking an Account Manager (Pharma) in Tampa.

In the post, it advertised a full-time position stating:

“U.S. Citizens and those authorized to work in the US are encouraged to apply. We are unable to sponsor H1b candidates at this time.

The listing did not announce which Tampa Bay company was looking for the "preferably Caucasian" employee.

“I was like, wow!” McCabe said. She was floored when she saw the ad.

McCabe tweeted the ad back at the job listing company, Cynet Systems and social media users took it from there.

The tweet took off, garnering more than 7,000 retweets and almost 700 comments.

One of those comments coming in from Cynet Systems itself saying,

“Cynet apologizes for the anger & frustration caused by the offensive job post. It does not reflect our core values of inclusivity & equality. The individuals involved have been terminated. We will take this as a learning experience & will continue to serve our diverse community.”

The Equal Employment Opportunity Commission said it couldn’t legally comment if an investigation had been opened or not into the job posting. But did confirm it’s illegal to discriminate against hiring certain ethnicity.

“It is unlawful to discriminate against any employee or applicant for employment because of race or color in regard to hiring, termination, promotion, compensation, job training, or any other term, condition, or privilege of employment," the Equal Employment Opportunity Commission (EEOC) said.

"Title VII prohibits both intentional discrimination and neutral job policies that disproportionately exclude minorities and that are not job related.

Job requirements must be uniformly and consistently applied to persons of all races and colors. Even if a job requirement is applied consistently, if it is not important for job performance or business needs, the requirement may be found unlawful if it excludes persons of a certain racial group or color significantly more than others. An example of potentially unlawful practice includes soliciting applications only from sources in which all or most potential workers are of the same race or color.

Title VII also has strict confidentiality provisions where we’re prohibited by law from confirming or denying the existence of specific charges. We’re also prohibited by law from providing information about investigations and administrative resolutions. Information about specific charges becomes public only when the EEOC files a lawsuit, which is typically a last resort.” an EEOC representative said.

We spoke with a woman looking for a job in the Tampa market, who says the competition is hard enough the way it is.

“I’ve been looking for a job for for like three months,” Gabriella Perez said.

Perez, a Spanish-speaking Cuban woman, says adding discrimination into the workforce race makes it even tougher to find a job.

“You shouldn’t discriminate others just because they can’t talk as well as you,” she said.

When we told her about the so-called racist job listing, she was not happy but also not surprised.

She said she wouldn’t even apply to that job.

“They might not even do it as well,” she added.

Perez said those who work harder to get a job are more happy and thankful to even have a job to go to each day.

As for Helena McCabe, who called out the recruiting company, she said she sees all sorts discrimination in her field of technology, but wishes it would end.

“I don’t want to see anyone treated that way,” she said.