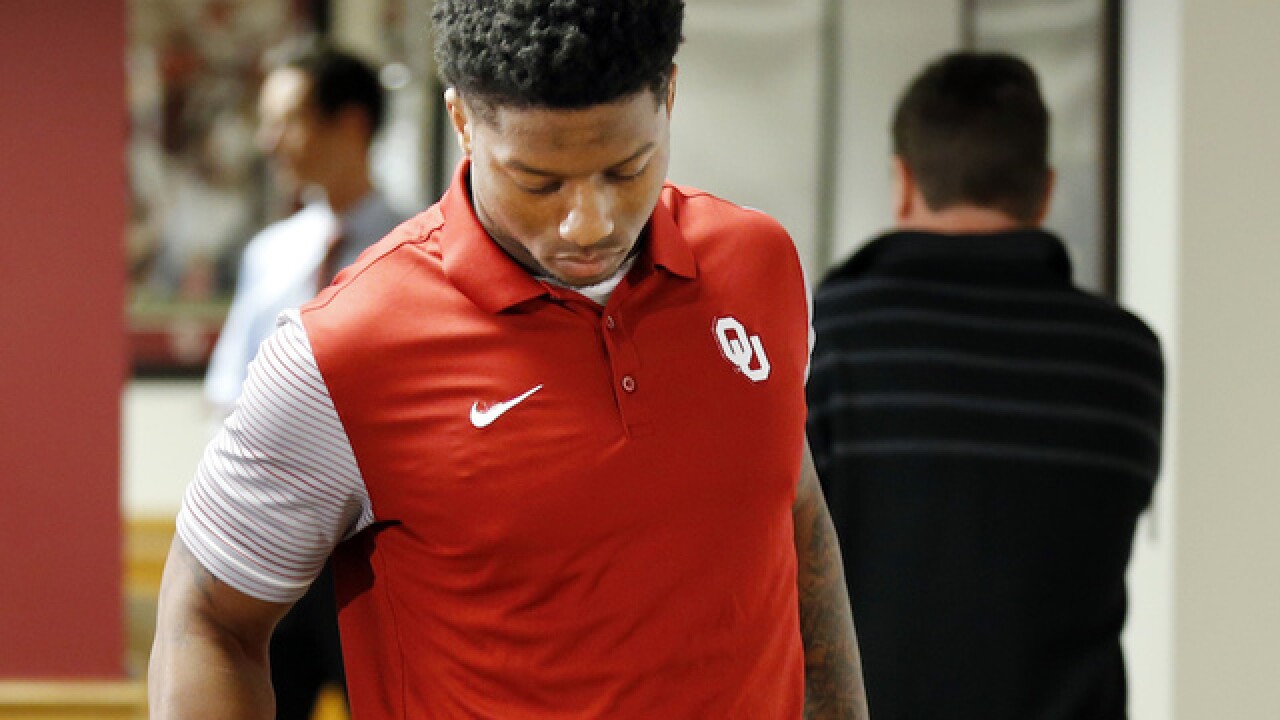 Steve Sisney
<p>Oklahoma football player Joe Mixon walks to the podium after passing head coach Bob Stoops as he speaks out for the first time since the release of a 2014 video showing him striking Amelia Molitor, at a press conference in Norman, Okla., Friday, Dec. 23, 2016.</p>

NORMAN, Okla. (AP) — Oklahoma running back Joe Mixon made a tearful public apology Friday, more than two years after punching a woman and breaking bones in her face.

As Oklahoma coach Bob Stoops looked on, Mixon spoke at a news conference Friday afternoon, more than two years after he assaulted Amelia Molitor and broke her jaw and cheekbone. Mixon said he wanted to address the issue earlier, but his legal team advised him not to.

"I'm here to apologize to Miss Molitor," he said. "I apologize to Coach Stoops, I apologize to President (David) Boren, the AD (athletic director Joe Castiglione), my teammates. And most of all, my family. I let a lot of people down."

Mixon was suspended for a year after the incident. Though Molitor shoved and slapped him first, Mixon said hitting a woman is unacceptable, even if provoked.

"Honestly, it really don't matter what she did that night," he said during the 26-minute session. "It's all on me the reason why I'm in this position right now. I take full responsibility of what happened that night. It's never OK to hit a woman. Never. I will preach that to anybody. It's never OK. Hopefully, people around the world will learn from my mistake, and I'm willing to teach."

The All-Big 12 performer said if it happened now, he would respond differently.

"If I could go back, I would do whatever I could to change the outcome of that situation," he said. "I definitely would have walked or ran away and went about the situation differently. I wouldn't have been in that situation."

Mixon said he was disappointed he let down his team, the university and his family. He struggled to speak when he began talking about the impact on his mother, a single parent who watched the video with him along with Norman Police a few days after the incident.

"My mother, she worked hard, and I disappointed her," he said. "She's my queen, and I apologize to you, mom."

Mixon's legal advisers released video of the punch last week, and Mixon said he wishes it had come out sooner. Since the video came out, there has been a backlash against Mixon, Stoops and the university. Mixon said he hasn't paid attention to his fellow students much on campus, but his teammates have been supportive.

"I can't do nothing but thank my teammates for lifting up my spirits," he said. "Just wanting me to come out and go hard for them every day, and I feel like honestly that's how I give back to them. I can only lead by example on and off the field by words, by my actions. Honestly, I'm willing to do anything for my teammates."

Mixon said he has matured and learned since July 2014.

Mixon said he's willing to speak against violence against women so others can learn from his mistake.

"I think when I have the opportunity to do that I'll seize the moment and do whatever I can to be the person — the bigger person — and the man I should be," he said. "I want to be that influence for young kids that are lost out there or in certain situations I was in. Hopefully, I can teach them for the next time and how to react a certain way."