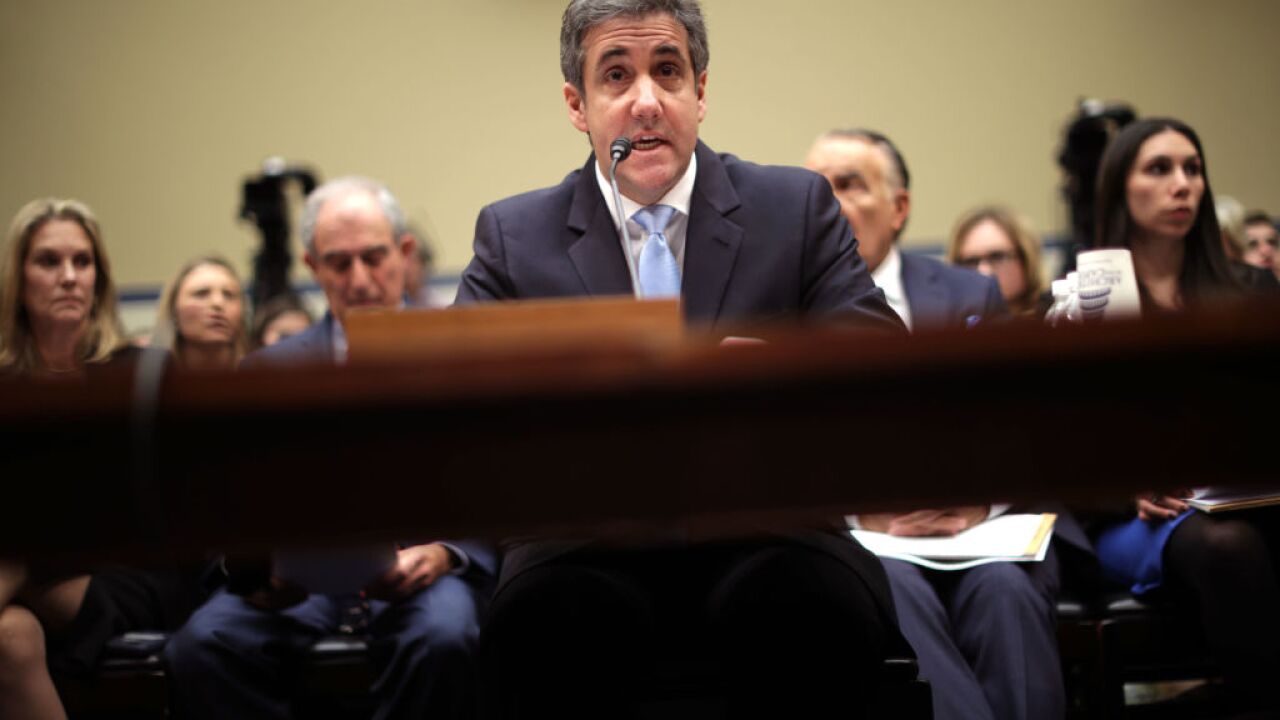 Michael Cohen on Wednesday provided the House Intelligence Committee with new documents showing edits to the false written statement he delivered to Congress in 2017 about the Trump Organization's pursuit of the Trump Tower Moscow project into the 2016 campaign season, according to multiple sources familiar with the matter.

The documents Cohen provided are intended to further explain his public testimony last week, in which Cohen said that President Donald Trump's then-personal lawyer Jay Sekulow made changes to his statement to the House and Senate Intelligence Committees, and that it was reviewed ahead of time by lawyers like Abbe Lowell, an attorney for Ivanka Trump and Jared Kushner, the President's daughter and son-in-law who are both White House advisers.

It's unclear what Cohen's documents show was specifically changed in the statement. Cohen is testifying Wednesday behind closed doors at the House Intelligence Committee.

"There were changes made, additions -- Jay Sekulow, for one," Cohen said last week. "There were several changes that were made including how we were going to handle that message, which was -- the message of course being -- the length of time that the Trump Tower Moscow project stayed and remained alive."

Sekulow pushed back on Cohen's allegations in a statement last week, saying that the "testimony by Michael Cohen that attorneys for the President edited or changed his statement to Congress to alter the duration of the Trump Tower Moscow negotiations is completely false."

As CNN previously reported, according to two of the sources familiar with the preparation, including one close to the Trump Organization and one close to the President's legal team, said the lawyers had no indication that any of the information in the testimony of Trump's now-former longtime attorney and fixer was inaccurate.

Cohen also accused Trump in his public testimony of encouraging him to lie about the Trump Tower Moscow discussions, though he said Trump did not tell him to do so directly.

"He doesn't tell you what he wants. What he does is again, 'Michael, there's no Russia, there's no collusion, there's no involvement, there's no interference.' I know what he means because I've been around him for so long," Cohen testified. "That's the message that he wanted to reinforce."

Cohen was supposed to report to prison Wednesday to begin serving a three-year sentence for tax crimes, tax evasion and lying to Congress. Instead, President Donald Trump's former lawyer is on Capitol Hill talking about the crimes he is now accusing Trump of committing.

Cohen, who is now slated to begin his prison term on May 6, is back on Capitol Hill on Wednesday for his fourth appearance in the last eight days, concluding his closed-door testimony before the Intelligence Committee that began last week.

In the first round of testimony last week, Cohen was asked about a range of topics, with lawmakers seeking additional details on the drafting of Cohen's statement as well as any discussions about a possible pardon. The session also included some of the partisan fighting that plagued the committee during its Russia investigation in the last Congress, according to sources familiar with his testimony.

Republicans on the committee objected to what they felt were untoward Democratic tactics in the run-up to the interview, noting that Democratic committee staff met with Cohen several times before the hearing without telling the Republicans, according to the sources. They also asked Cohen about his comments in last week's public hearing that he had discussed "topics" with House Intelligence Committee Chairman Adam Schiff before the hearing, the sources said.

Rep. Mike Turner, an Ohio Republican, sent Cohen's attorney a letter on Thursday asking for details about his contact with Schiff and his committee staff, suggesting the staff may have "coached" Cohen.

Patrick Boland, a spokesman for Schiff, said that the committee was running "a professional investigation in search of the facts, and we welcome the opportunity to meet with potential witnesses in advance of any testimony to determine relevant topics to cover in order to make productive use of their time before the committee."

"Despite this professed outrage by Republicans, it's completely appropriate to conduct proffer sessions and allow witnesses to review their prior testimony before the Committee interviews them — such sessions are a routine part of every serious investigation around the country, including congressional investigations," Boland said.

Consultation with witnesses ahead of a hearing or interview isn't necessarily out of the ordinary. For instance, Cohen's lawyer, Lanny Davis, also spoke to Republicans on the House Oversight Committee ahead of their hearing last week. But the questions about Schiff's consultation from Intelligence Committee Republicans underscores the divisions between the two parties on that panel when it comes to the Russia investigation.

And the House Intelligence Committee has signaled interest in Weisselberg, while Schiff said the committee would hold a public hearing next week with Felix Sater, the Russian-born Trump business associate who worked with Cohen on the Trump Tower Moscow project.

Trump has aggressively pushed back on the House investigations following Cohen's testimony, charging that "the witch hunt continues" and Democrats have effectively "started the campaign."

"The witch hunt continues. The fact is that -- I guess we got 81 letters. There was no collusion. It's a hoax," Trump told reporters Tuesday when asked about the investigations.

In his public testimony last week, Cohen accused Trump of directing him to make hush-money payments to women alleging affairs, and then displayed a reimbursement check he was paid with Trump's signature. He also accused Trump of telling him to publicly lie about Trump's knowledge of the payments in February 2018, along with committing financial fraud.

He followed up that public House Oversight appearance with the first part of his closed-door House Intelligence interview the following day, where Schiff said the committee was able to "drill down" certain issues in even more detail.

"We are in communication with, obviously, Mr. Cohen and his counsel about further document requests following our interview today that we'll be able to discuss at our next session," Schiff said after Cohen had finished for the day. "We also went through documents in our possession, dozens of documents in our possession with Mr. Cohen, but we have additional document requests that we will be in discussion with him about."

There are a host of topics that lawmakers are interested in hearing from Cohen about, including his public testimony about overhearing a conversation between Trump and longtime confidante Roger Stone involving a WikiLeaks' email dump, presidential pardons, and Cohen's public testimony that the Southern District of New York could be investigating his conversations with Trump.

The Wall Street Journal reported Monday that Cohen's former lawyer, Stephen Ryan, discussed the possibility of a pardon for Cohen with Trump's attorneys after the FBI's raid on Cohen.