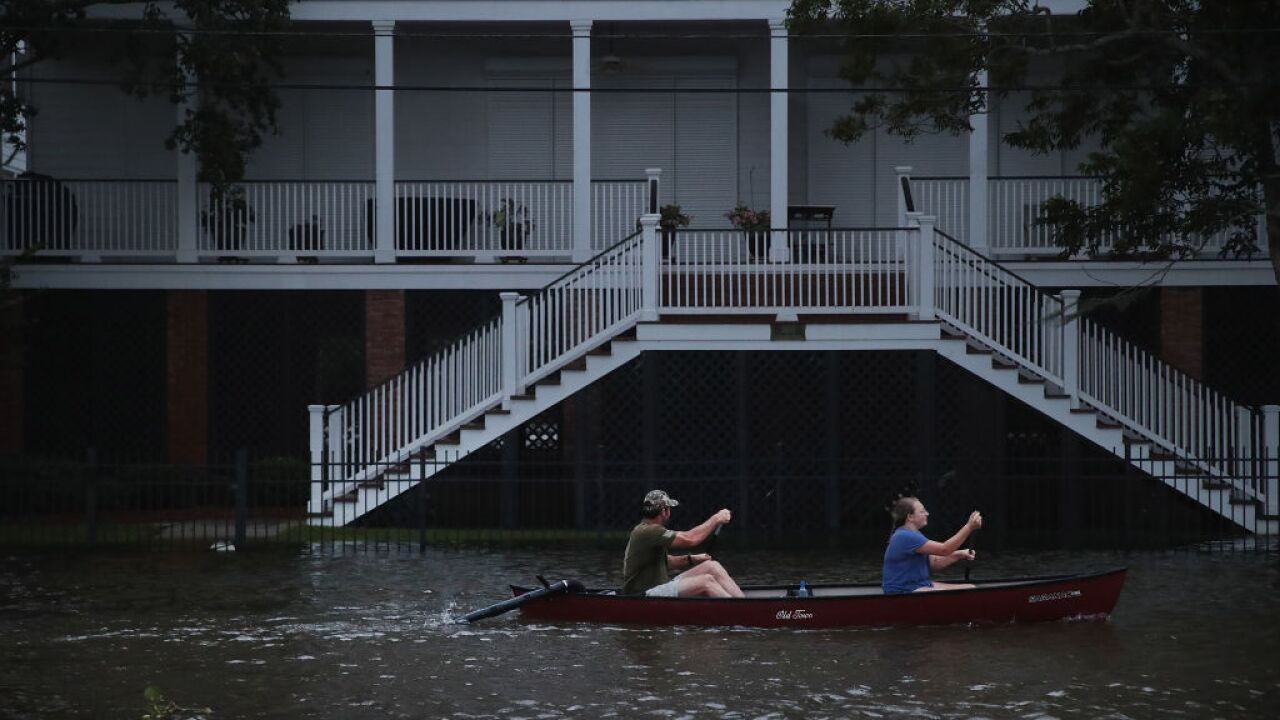 Ludovico Torri woke up Saturday morning to a surprising sight: Lake Pontchartrain was at the door of his Mandeville home, just north of New Orleans.

"The entire street and area under the house was underwater," Torri told CNN.

Over the next hour and a half, the water rose another foot and the wind kept on getting stronger. His family, including four children, were stuck in their home with their car nearly flooded.

Tropical Storm Barry was briefly a Category 1 hurricane before it made landfall Saturday and weakened back down to a tropical storm. The slow-moving storm still has heavy rain to come, threatening parts of Louisiana and Mississippi with life-threatening storm surge, flash flooding and river flooding, according to the National Hurricane Center .

While some families like Torri's are trapped in their home to ride the storm out, others have had to evacuate and find shelter elsewhere.

Joyce Webber, 64, was sheltering with about 20 other people in a St. Mary Parish community center when she learned a large tree branch had fallen on her mobile home and her storm door had blown off.

"Trailers don't hold, no matter what type of storm," she told CNN. "They just don't hold."

Others, like Ollie and Hazel Jordan, have struggled to find a place where both they and their pets can be safe. The couple, 72 and 70-years-old respectively, walked a mile in the rain from their trailer to a shelter at a Baton Rouge middle school only to be told that they could not bring in their two cats and small dog.

Officials are working to evacuate residents with their pets, saying that it is important and humane to keep the two together even in life-threatening conditions.

It will not be an easy storm for the region to weather, but Louisiana Gov. John Bel Edwards says that the state will recover.

"The people of Louisiana are resilient," he added, "and while the next few days may be challenging, I am confident that we are going to get through this."

As Barry moves north-northwest over Louisiana, it is expected to weaken, becoming a tropical depression during the day Sunday, the NHC said early Sunday morning. Heavy rain and flooding are the primary threat to the state, the National Weather Service in New Orleans .

"Don't let your guard down if you are in Louisiana," said CNN meteorologist Derek Van Dam. He said the slow pace of the storm is compounding the flash flood threat and the storm is still pulling moisture up from the Gulf of Mexico.

Beginning to feel the effects

Nearly 3,000 National Guards troops had been deployed throughout Louisiana for potential storm response, and the state's Emergency Operations Center remains fully active and staffed around the clock, according to Edwards' office.

"This storm has our attention," Edwards said in a statement Saturday. "While most of the rain right now is in the Gulf, we know that it will be coming ashore and impacting a large portion of the state. We are asking that everyone stay vigilant and be safe."

At least 153,547 customers in Louisiana were without power as of the early hours of Sunday.

While the storm has -- and may continue to -- cause problems for the Gulf Coast, New Orleans is not at risk for some of the dangers officials predicted before the storm hit.

All eyes were on the Mississippi River, as forecasts showed a potential storm surge of 2 to 3 feet that could have raised the river's level to 19 feet in New Orleans. The levees protect up to only one foot higher.

But Friday's storm surge was lower than expected. And even with the heavy rain ahead, the NWS is now only predicting up to 17.1 feet, with the next crest expected to happen on Monday.