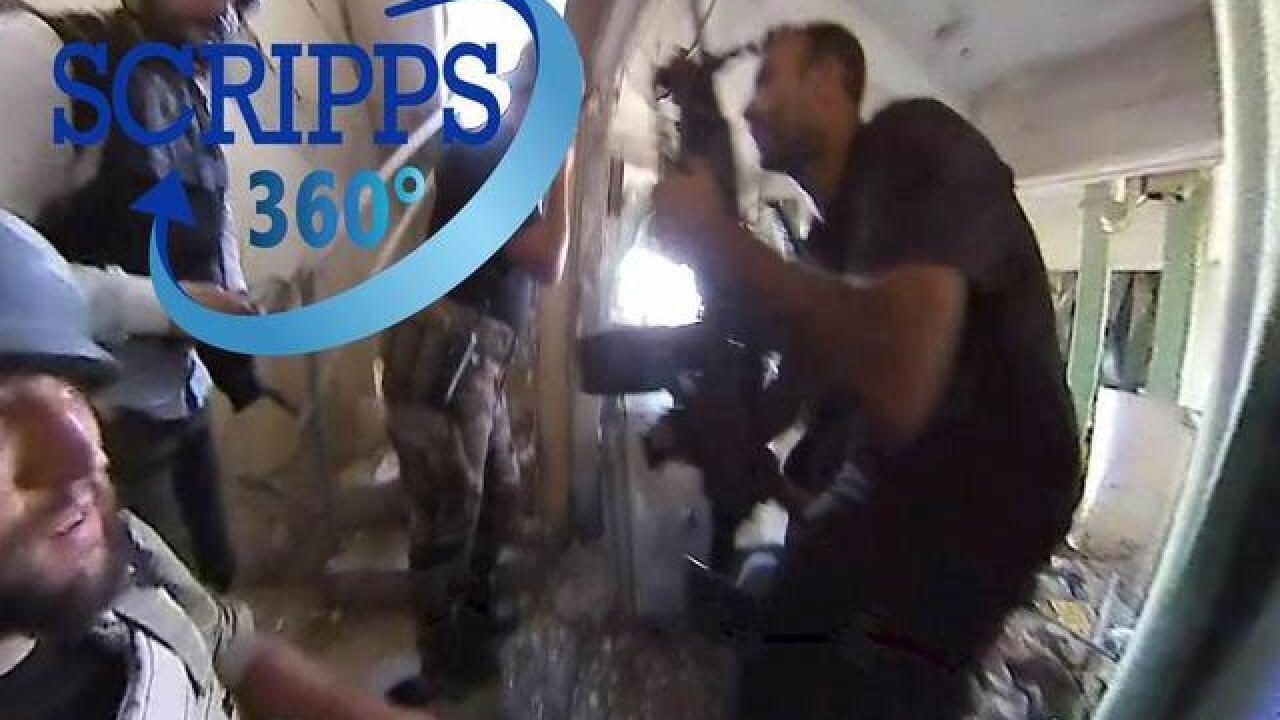 Copyright 2017 Scripps Media, Inc. All rights reserved. This material may not be published, broadcast, rewritten, or redistributed.
<p>360 experience below </p>

“Once we cross this bridge, anything can happen” our fixer, Ayar, warns as we rumble over the Tigris and officially cross into western Mosul.

The eastern half of the city has been liberated for months, and some semblance of normal life has returned to the city. Most of west Mosul has been liberated as well, save for the Old City: its ancient buildings, narrow streets and endless blind alleys have made clearing the last ISIS fighters a slow, brutal process.

We start our trip into west Mosul with a long stay at the checkpoint Scorpion. Mosul is filled with checkpoints like this, where Iraqi soldiers and police search vehicles heading to and from the disputed areas. Some of these people are fleeing the city for Internally Displaced Person camps, and some of them are returning to their homes in newly-liberated portions of the city.

Some parts of west Mosul look almost normal, like any other city in Iraq. But the closer you get to the Old City, where ISIS still reigns, the more complete the devastation. Here, past the checkpoints, mortars are a constant threat and ISIS snipers can strike anywhere, at any time.

In the afternoon, we embed with some soldiers from Iraq’s elite Golden Division, who’ve just taken a factory building from ISIS. The building has been heavily shelled, and we scramble up the stairs as quick as we can to avoid being too much of a target. Looking through the slats in the wall, we can see the famed Al-Nuri mosque, which would be destroyed less than 48 hours later. It’s less than a mile away.

Ahead of us, on the ground, the Golden Division advances on ISIS territory. Every few minutes, the soldiers with us get a call and open fire with their machine guns, providing cover. In between shots, they try to relax. This is their day off. The next day, their comrades on the ground will provide cover, while they advance through the winding streets of the Old City.

Next we visit a field clinic in west Mosul, adjacent to the Iraqi Special Forces base. When we arrive, they’re treating a wounded Golden Division soldier. We’re not allowed to film that. But we do get an interview with the head doctor after the soldier is stabilized and driven away. While we talk, an orderly hoses the soldier's blood from the concrete. As soon as the interview ends, a Humvee roars up and unloads a badly injured Golden Division soldier. He’s been shot through the shoulder, but he hobbles into the clinic mostly under his own power.

The next day, we cross into the Old City, and we meet hundreds of civilians, newly minted refugees who, until a few hours ago, had lived under ISIS domination. Many of them are wounded, all of them are sick and malnourished. These IDPs — internally displaced persons — will be given food and water before being loaded onto trucks and taken to a refugee camp. But first, their IDs are checked and their bags are scanned for explosives. While we’re there, the soldiers arrest one man, an Egyptian citizen, as a possible ISIS sympathizer.

It’s a heartbreaking sight in many ways. But it’s also a happy one. These people are now free. Many of them have brought their pets: caged birds, puppies, and, in one woman’s case, three chickens. She carries them in her arms.

“They are like her children,” one man tells me.

Next, we roll past the IDP collection point and back towards the front line. Golden Division soldiers have just taken a few hundred meters of the Old City, killing 26 ISIS fighters. We arrive to a scene of complete devastation. We scramble over shell craters from airstrikes while, all around us, the battle for Mosul rages on. Gunfire echoes off the old buildings, and our escorts push us to move quickly to avoid making a target for ISIS mortars.

The Golden Division soldiers give us a tour of the ground they’ve just captured. They’re extremely personable. One soldier has a "Make Mosul Great Again" patch on his shoulder. I ask him about it, and my interpreter informs me, “He made it himself.”

While we walk, our guide gives us a blow-by-blow account of the day’s fighting. It started with a punishing series of airstrikes in the morning. One of those strikes buried at least four fighters: we can smell their bodies under the rubble as we scramble over it. But, for the most part, the purpose of the airstrikes is to make the roads in the Old City impassable, so ISIS cannot drive their numerous vehicle-based IEDs into advancing Humvees.

The Iraqi army doesn’t like to talk about their own casualties, but it’s clear they’ve bled for every inch of the old city. At one point, a soldier picks a discarded niqab off the ground. He informs us that one ISIS fighter would wear this so he could look out from behind corners without being shot immediately. The Iraqi soldiers would mistake him for a woman, until he opened fire with his AK-47.

A few minutes later, we come upon the body of that dead ISIS fighter. Killing this one foreign fighter — believed to be a Russian — was the work of several hours. Behind us, Golden Division soldiers use the opportunity to take selfies with the man’s corpse. They’re soldiers in a deadly warzone, but they’re still Millennials.

As it gets dark, the fighting grows more intense. We have to leave the Old City. But the soldiers of Iraq’s Golden Division will be here for weeks more, fighting house by house until the last ISIS fighter falls. It’s hard to say how long that will take. Earlier in the day these men’s commander, Major Hassan Al-Iraqi, informed me he believes only 300 or so fighters remain. But these soldiers are mostly Russian and Chechen foreign fighters. They are extremely well trained, experienced combat veterans.

There will be much more bloodletting before Mosul is free.