Liquid blood and urine have been found inside a prehistoric 42,000-year-old foal 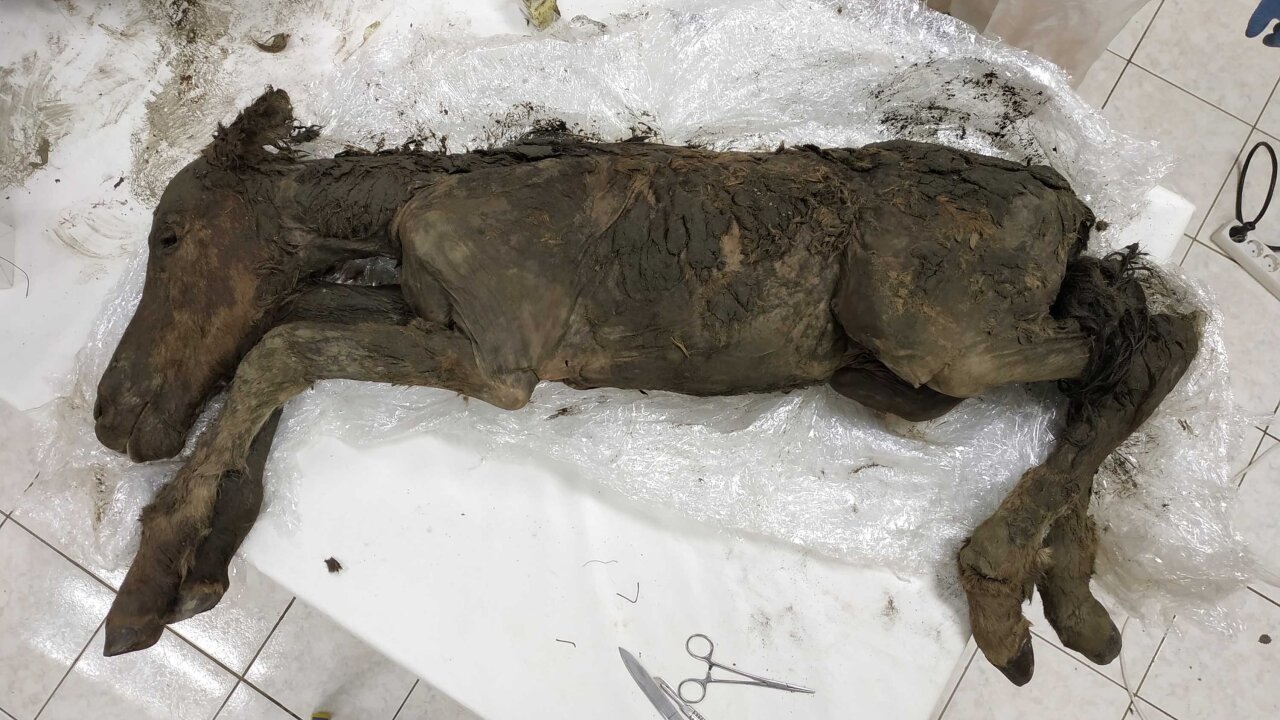 Russian researchers have found liquid blood and urine inside the frozen carcass of a foal that died 42,000 years ago in Siberia's Verkhoyansk region.

The animal's body fluids were extracted during an autopsy and tested in the hope of cloning the extinct species, according to Semyon Grigoriev, director of the Mammoth Museum at Northeastern Federal University (NEFU) in Yakutsk.

Mammoth tusk hunters discovered the ancient foal embedded in the permafrost of the massive Batagaika crater during the summer of 2018.

Grigoriev said via email that the foal appeared to have been just two weeks old when it died, likely by drowning in mud which then became part of the permafrost.

"An autopsy showed the foal carcass was extremely well-preserved, the body even without deformation," he added. "The hair cover also preserved most parts of the carcass, especially at the head and legs."

The preservation of the animal's fur was extremely rare, Grigoriev said, before adding, "Now we can say what color was the wool of the extinct horses of the Pleistocene era."

The discovery of liquid blood and urine is rarer still. Grigoriev said he was aware of only one other case where liquid blood was found in an animal from the Pleistocene epoch, which lasted from around 2.6 million years ago until about 11,700 years ago. That was in the frozen carcass of an adult mammoth discovered by Grigoriev's team in May 2013 at Little Lyakhovsky Island off the northeast coast of Russia.

"As a rule, the blood coagulates or even turns to powder in the ancient remains of animals of the ice age, even if the carcass is preserved seems to be well," Grigoriev explained. "This is due to mummification when moisture and other biological fluids gradually evaporate over thousands of years, even if the remains are in the permafrost. The remains are preserved best if they are in the ice, as it was with our mammoth."

Grigoriev said NEFU specialists were working with experts from the controversial South Korean Sooam Biotech Research Foundation in an effort to cultivate the foal's cells for cloning, though he was pessimistic about their chances.

Sooam is led by scientist Hwang Woo-suk, who claimed in 2004 that he had successfully cloned human embryonic stem cells before admitting he had faked his findings.

"I think that even the unique preservation [of] blood is absolutely hopeless for cloning purposes since the main blood cells -- the red blood cells or erythrocytes -- do not have nuclei with DNA," Grigoriev said. "We [are] trying to find intact cells in muscle tissue and internal organs that are also very well-preserved."

The ancient horse will be exhibited across Japan from June to September 2020 as part of The Mammoth exhibition.