Lion Air: Why did a brand-new Boeing jet crash 13 minutes after takeoff? 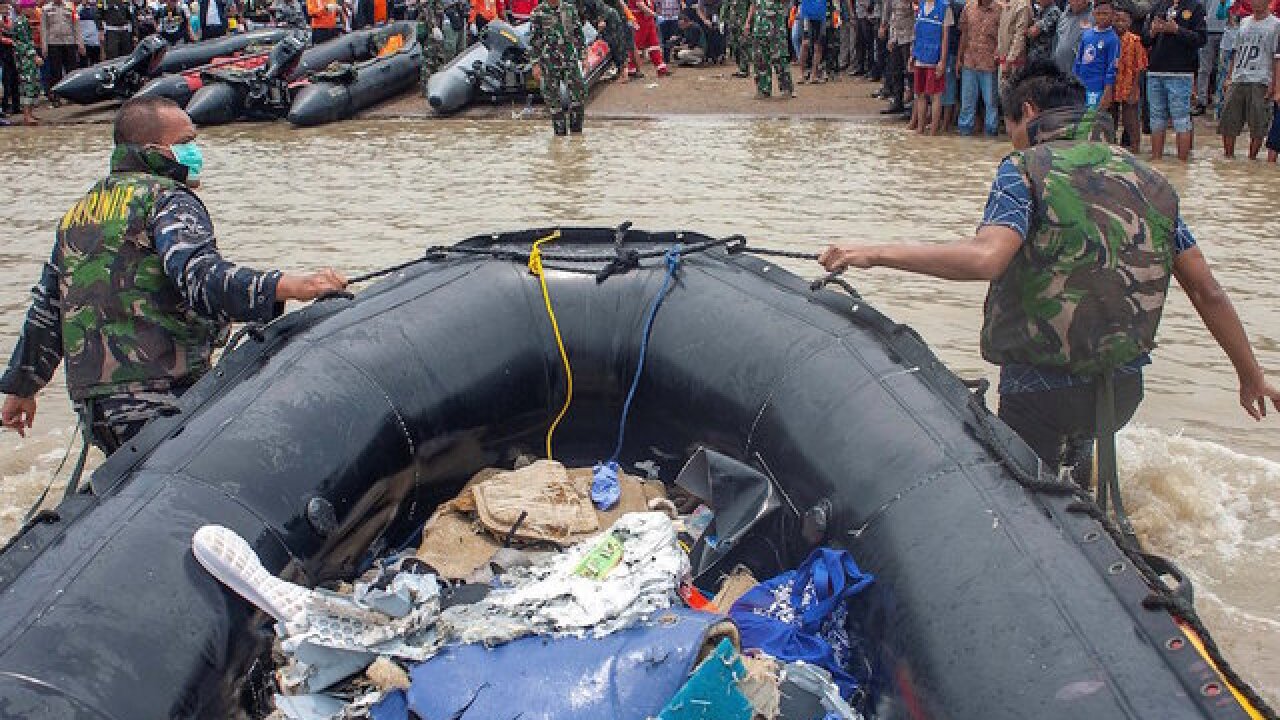 Copyright 2018 Scripps Media, Inc. All rights reserved. This material may not be published, broadcast, rewritten, or redistributed.
Antara Foto/REUTERS
Soldiers push an inflatable raft as they carry debris of the Lion Air flight JT610 airplane that crashed into the sea, as they walk onto Tanjung Pakis beach in Karawang, Indonesia, October 30, 2018.

The plane behind Lion Air's crash off Indonesia was one of Boeing's newest and most advanced jets. It was just two months old and with 800 hours under its belt, so experts are baffled as to what exactly caused the 737 MAX 8 to crash.

While no information has been released yet as to why the brand-new plane crashed into the sea 13 minutes after takeoff, FlightRadar24 has published data that shows the plane behaving erratically during takeoff. When a plane would normally be ascending in the first few minutes of flight, the Lion Air jet experienced a 726-foot drop over 21 seconds.

Aviation expert Philip Butterworth-Hayes told CNN that the data was unusual -- especially since takeoffs like this are typically controlled by the plane's automatic systems.

"This doesn't fit an automatic flight profile," Butterworth-Hayes said while studying the data. "Unless, the aircraft was trying to correct itself at the time for a number of reasons."

"This shows an unusually unstable vertical flight profile," he added.

"Exactly at the same time as the speed increased there was an altitude dip, which meant that at that point there was quite some loss of control."

The plane, which has only been in operation since August 15, was carrying 181 passengers as well as six cabin crew members and two pilots, bound for Pangkal Pinang on the Indonesian island of Bangka.

Former US National Transportation Safety Board air crash investigator and CNN aviation analyst Peter Goelz told CNN the data clearly showed issues with both the speed and altitude of the plane.

"There is something obviously wrong in both the air speed and the altitude which would point to the flight control systems," he said. "These are fly-by-wire systems -- highly automated -- and pilots may not be able to troubleshoot failures in a timely manner."

'Airplanes don't just fall out of the sky'

Butterworth-Hayes said that given that the plane was only two months old, the reason behind the crash was "very unlikely" to be a mechanical fault.

"Airplanes don't just fall out of the sky," he said. "I can't think of any mechanical issue apart from a sudden, unexplained loss of engine power (or)complete electrical failure. It's far more likely to be an external event."

He suggests that an environmental issue is to blame -- such as a microburst, or the plane hitting something like a flock of birds.

"Microbursts are very difficult to detect -- they're a sudden down-rush of wind, like a vortex and you can't really see it -- you hit it, suddenly your aircraft isn't performing how it should do, you start doing all sorts of recovery motions and then it's too late."

The new Boeing 737 MAX 8 made a request to air traffic control to return to the airport around 19 kilometers (12 miles) after takeoff, but did not indicate there was any emergency.

Radar data did not show that the plane had turned back, and air traffic controllers lost contact with it soon after, Yohanes Sirait, spokesman for AirNav Indonesia, the agency that oversees air traffic navigation, told CNN.

Butterworth-Hayes said that the fact that the pilots had not indicated there was any problems on board suggests there was a minor incident they were dealing with that they were in control of.

"Their call suggests it was a minor incident which they were in control of and they didn't require assistance," he said. "But that rapidly escalated."

"There was an altitude loss (before the flight crashed) and just after that there was obviously some sort of correction," Butterworth-Hayes said while looking at the FlightRadar24 data.

"Whatever happens to that dip is a correction but whatever that correction was wasn't very long and that's when the plane started falling."

Speaking earlier with CNN, David Soucie -- a former safety inspector with the US Federal Aviation Administration -- said the fact that an emergency wasn't declared should be a cause for concern.

"What's most peculiar to me is the fact that they didn't declare an emergency. They just simply said, 'We're going back,'" said Soucie, a CNN safety analyst.

"But when I look at the track of the aircraft after that, the aircraft made a very steep dive after that, which is not typical of what they would've done," he added. "They would have maintained altitude and made that turn and come back to (the airport)."

Soucie added that something had to have happened for the aircraft to lose control.

He ruled out weather as a cause of the crash, however, since the plane did not appear to attempt to turn back toward Jakarta. "That says that something abrupt and very fast happened to the aircraft."

Are pitot tubes to blame?

Pilots on board the plane's previous flight from Denpasar to Jakarta reported technical problems and that the plane was displaying "unreliable airspeed," the deputy chief of Indonesia's National Transport Safety Committee, Haryo Satmiko, told reporters, including Reuters, during a news conference on Monday.

Engineers had checked and repaired the issue, Lion Air Chief Executive Edward Sirait told local media, and that they gave the plane clearance to fly.

When asked about the "unreliable airspeed" problem that was reported, Butterworth-Hayes said the pilots would have been reporting an issue with the pitot tubes that determine air speed. Infamously, Pitot tubes were to blame for the Air France Flight 447 crash in 2009 when it plunged into the Atlantic Ocean. Ice crystals blocked the plane's pitot tubes, the autopilot disconnected and the pilots did not know how to react to what was happening.

"It reminds me a lot of the aircraft that came down in the Atlantic where you had accelerating speed and a loss of altitude -- which implies there was a sudden loss of control of the aircraft," he said.

"But if you look at the speed (from data from FlightRadar24), it's pretty constant."

He says, however, "Pitot tubes are only one part of the issue -- if pitot tube sensors were showing a different reading from other aircraft sensors this might explain a difference in aircraft performance indications."

The aircraft was one of 11 of the Boeing planes in Lion Air's fleet. In a statement, Boeing said the company was "deeply saddened" by the loss and offered "heartfelt sympathies" to passengers and crew on board, and their families.

Soucie said 800 hours was plenty of time "to get this tried and true."

He added the MAX 8 was "the top of the line, it's one of the best you can buy ... I don't see anything coming back towards maintenance on this issue or the flight of the aircraft itself."

Goelz agreed that the loss of such a new aircraft was "highly unusual."

But because Lion Air jet's pilot and co-pilot were experienced -- 6,000 and 5,000 flight hours, respectively -- and weather did not seem to be a factor, investigators would be focusing on the aircraft, he said.

Avirianto said Garuda's plane was inspected on Monday night. The ministry hoped to inspect at least three of Lion's remaining aircraft Tuesday night and the other eight soon. "We will checklist one by one, with its system and technical things," he said.

Until the aircraft's flight data recorders are found and an investigation is held, it's unlikely we'll know much about the cause of the Monday's crash, Aviation consultant and former pilot Alastair Rosenschein told CNN's Becky Anderson.

Rosenschein said it's particularly important to find the black boxes quickly because the plane that crashed was a newer aircraft.

"What happened here could possibly affect the same model of aircraft flying in other parts of the world," he said.

Until those boxes are found, it's unlikely that authorities will be able to figure out what brought down the plane.

Goelz said the Lion Air crash is yet again another reminder to officials that airlines need better recovery equipment.

"I also think it will take a few days to find the date recorders," he said, adding it's hard to find things in the ocean.

"(It) again highlights the need for more sophisticated tracking and recovery devices."