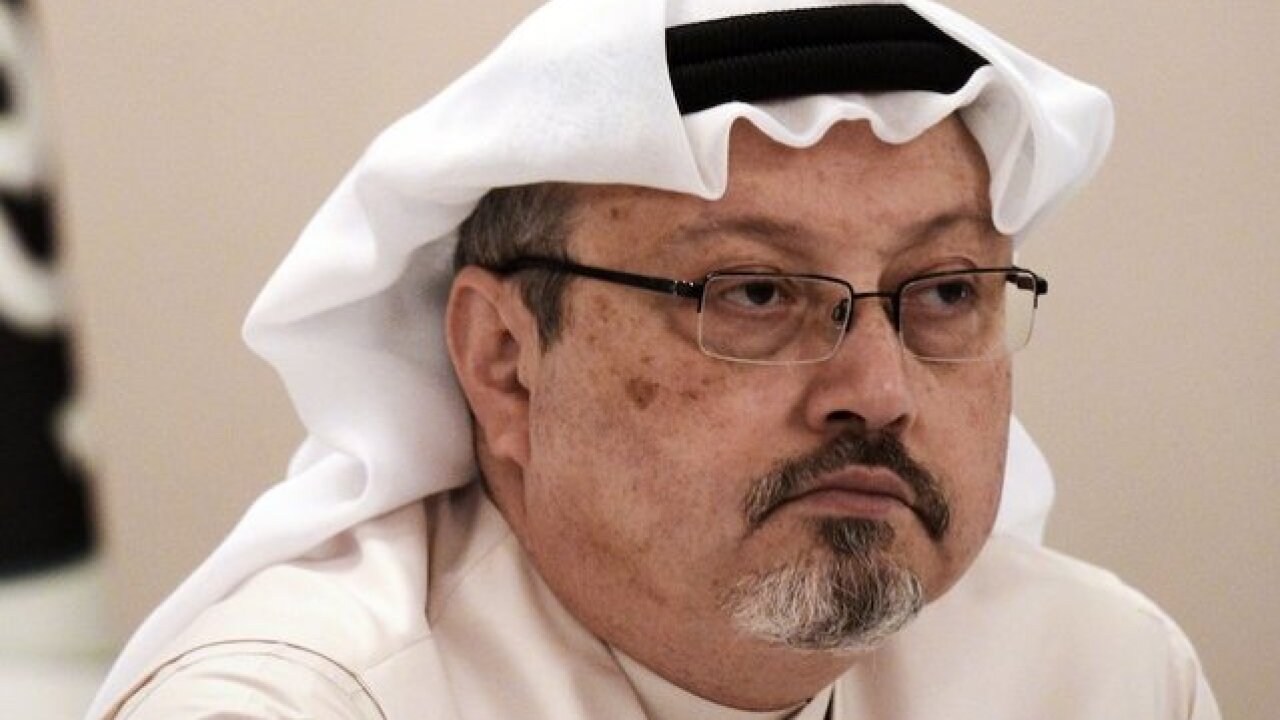 Saudi Arabia's King and its de facto leader have called the son of slain journalist Jamal Khashoggi to express their condolences, Saudi state media has reported.

Saudi King Salman bin Abdulaziz Al Saud made a phone call to Salah Khashoggi, the eldest son of deceased journalist Jamal Khashoggi, to express "his condolences to the family and relatives of the late Jamal Khashoggi," the state-run SPA news agency reported Monday.

Saudi Crown Prince Mohammed bin Salman also called the younger Khashoggi, who "expressed his sincere thanks" to the Crown Prince for his thoughts, according to SPA.

Salah Khashoggi, who lives in the Saudi city of Jeddah, has been unable to travel out of Saudi Arabia for several months, as his passport had been invalidated, according to sources close to the family. Other members of Khashoggi's family, including his ex-wife and daughter, are currently in Dubai, add the sources.

The calls came as the journalist's fiancée, Hatice Cengiz, was placed under 24-hour police protection, the Istanbul Governor's office announced on Sunday.

Journalist Jamal Khashoggi, a Washington Post columnist and US resident, had entered the Saudi consulate in Istanbul on October 2 to take care of some paperwork related to his upcoming wedding to Cengiz. She had been waiting for him outside and raised the alarm when he failed to return.

On Friday the Saudi government, after weeks of denials, admitted that he had died in the diplomatic compound. The official line had been that he was accidentally killed when an altercation with officials turned into a brawl.

The Saudis, who for almost three weeks denied any involvement or knowledge of Khashoggi's fate again pivoted in their explanation Sunday, with Foreign Minister Adel al-Jubeir telling Fox News' Bret Baier that the killing of journalist Jamal Khashoggi was a "tremendous mistake" and part of a rogue operation.

"The individuals who did this did this outside the scope of their authority," he said Sunday. "There obviously was a tremendous mistake made, and what compounded the mistake was the attempt to try to cover up. That is unacceptable in any government."

Al-Jubeir said that Saudi Arabia was taking action to investigate how Khashoggi died and hold those responsible accountable, and reiterated the kingdom's position that bin Salman was unaware of the operation.

"Even the senior leadership over intelligence service was not aware of this," al-Jubeir said. He also added his condolences to the family of the slain journalist.

US President Donald Trump and his Turkish counterpart Recep Tayyip Erdogan addressed the issue of Khashoggi's death in a call over the weekend, Turkish state news agency Anadolu reported early Monday, and have pledged to "shed light on all aspects" of the incident.

In a speech in Istanbul Sunday Erdogan promised to elaborate on the Turkish position at a party meeting on Tuesday.

Turkish authorities will interview an additional 28 consulate staff members on Monday as part of the investigation, according to state broadcaster TRT.

In addition to the Trump-Erdogan call, US Secretary of State Mike Pompeo spoke with Turkish Foreign Minister Mevlut Cavusoglu Sunday night and reiterated the offer of US assistance with the Khashoggi investigation, a senior State Department official told CNN.

The US leader has continued to hedge, offering support for bin Salman, calling him in a Washington Post interview a "strong person" who "truly loves his country" while asserting that "obviously there's been deception and there's been lies" throughout the three weeks since Khashoggi's disappearance.

The Turkish investigation is being hampered by the lack of a body -- a source close to the Saudi Royal Palace told CNN that the location of Khashoggi's body is not known to the Saudis.

The source said the body was handed over to a local "collaborator" after the killing, adding that it is not at the Saudi consulate in Istanbul. CNN cannot verify the assertion.

Forests and farms in the vicinity of Istanbul have been the focus of rumors -- although no evidence has been discovered that his body was dumped there.

Speaking to reporters outside Saudi Arabia's consulate in Istanbul on Saturday, Turan Kislakci, the head of the Turkish-Arab Media Association and a friend of Khashoggi, called on Saudi Arabia to hand over the journalist's body.

"Give us Jamal, so we can have a funeral for him. So that all people who care about him, world leaders, can come here to Istanbul for the funeral," he said.

An increasingly vocal chorus of international voices have to come to question Saudi Arabia's story.

On Sunday, the UK, French and German foreign ministers released a joint statement on Khashoggi, noting Saudi Arabia's preliminary findings but calling for an "urgent need for clarification" on what exactly happened after he entered the consulate on October 2.

"Nothing can justify this killing," the statement said. The European Union and United Nations called for a full, transparent investigation in cooperation with Turkey.

German Chancellor Angela Merkel rejected the Saudi statement put out Saturday, saying that her government expected "transparency in terms of death and background. Those responsible must be held accountable. The information given at the consulates in Istanbul is insufficient."

Merkel said Sunday that her country will halt all exports of weapons to Saudi Arabia while uncertainty surrounds Khashoggi's death.

"There is an urgent need to clarify what happened," Merkel said in Berlin.

US lawmakers on both sides of the aisle also joined the chorus of condemnation.

South Carolina Republican Sen. Lindsey Graham said that he didn't think the Saudi explanation was "credible at all," while Democratic Sen. Dick Durbin of Illinois told CBS' Meet the Press that the US should "formally expel the Saudi ambassador from the US until there is a completion of the third-party investigation into this kidnap, murder and god knows what followed that occurred in Istanbul."

Saudi allies in the region, including the UAE, Egypt, Bahrain, Jordan, the Gulf Cooperation Council (GCC) and the Palestinian Authority expressed solidarity with the Saudi position, some praising Riyadh for its "transparency" and "fairness" in the case.