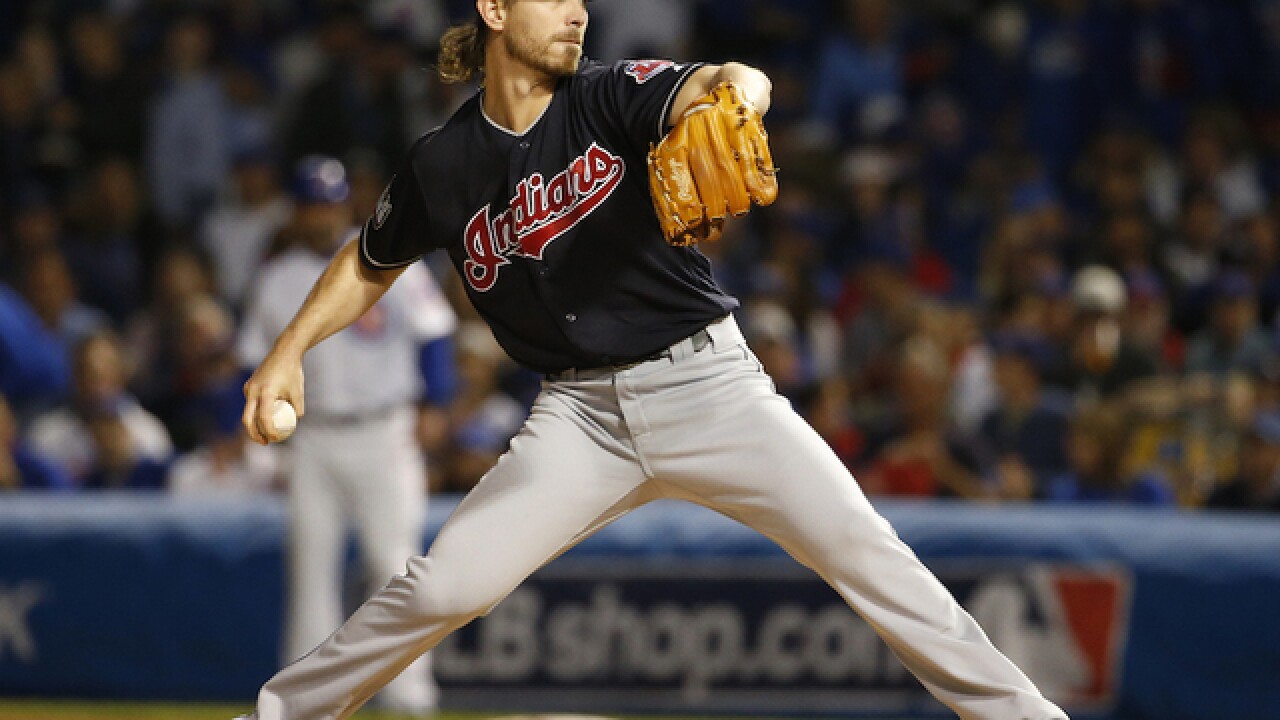 CHICAGO (AP) — When Josh Tomlin's night was done and he made the walk to Cleveland's dugout, his eyes scanned the Wrigley Field crowd searching for his dad.

He found Jerry Tomlin, who made it to the World Series — just like they both had dreamed.

With his dad watching from a wheelchair, Tomlin pitched 4 2/3 scoreless innings Friday night as the Indians spoiled a game Chicago fans had waited 71 years to see by blanking the Cubs 1-0 in Game 3 to take a 2-1 lead in the Series.

On a historic night in one of baseball's grandest ballparks, the Tomlins' story was as sweet as it gets.

"I knew where he was, and what this meant to him and me and my mom," Tomlin said after Cody Allen struck out Javier Baez for the final out. "So it was pretty special, one of the most emotional starts I've had in my career."

Jerry Tomlin nearly died two months ago from a circulatory malformation that has left him paralyzed from the chest down. He spent two months in the Baylor Rehab Institute in Dallas before being released on Josh's birthday, which happened to be the day the Indians clinched the AL pennant.

And although he can't walk, and faces a daunting future, Jerry wasn't going to miss seeing Josh pitch in the Series.

He made it all right, and as he sat in Section 122 swallowed by an ocean of Cubs fans, the elder Tomlin couldn't stop smiling.

"It's hard to put into words," he said about 30 minutes before Josh threw his first pitch. "I didn't know what I was going to say when I got here and I still don't. The way everything planned out and the way people helped me to get here, man, it's definitely a dream come true.

"There was no way I was going to miss this."

And his son, who used to pretend he was in the World Series when he threw to his dad in their backyard, pitched the game of their lives.

Jerry Tomlin made the trip to Chicago accompanied by his wife, Elena, who stood in the aisle as game time approached.

"We both have butterflies," she said. "This is a day (Josh) has been waiting for since he was 4 years old. He's been playing baseball his whole life. What more can you ask for than when your kid gets to live his dream?"

On his way to the weight room before the game, Tomlin was told where his parents were sitting along with some friends who helped them transport Jerry from his home to Chicago.

"I wanted to know where he was, so I could look up and see him," Tomlin said.

And when he felt his mechanics were off or he wasn't doing what he needed to, Tomlin looked for his dad.

"If the game was speeding up to me, just to find that sense of calm there," he said. "What he's gone through, I mean, that's nothing to what we're going through right now. So to be able to find him and see him in the stands, it kind of calmed me down and just let me go out there and settle into the game and try to go out there and do the best that I could for him."

Once again, Tomlin came through for the Indians, holding the Cubs and their fearsome lineup without a run on two hits before he was lifted by manager Terry Francona, who gave him a hug before taking the ball.

The Indians entered the postseason down two starters as both Carlos Carrasco and Danny Salazar were injured in September, and then when Trevor Bauer cut his pinkie open while repairing one of his drones, Cleveland's chances to go very deep in the postseason seemed remote at best.

But Tomlin has delivered, entering Friday's game with a 2-0 record and 2.53 ERA.

He's been a rock, just like his dad always has been for him.

Jerry Tomlin coached Josh until he was in high school and the 31-year-old, who is the longest-tenured player on Cleveland's roster, said he has friends who tell him to this day that his dad was the best coach they ever played for.

Tomlin knew nothing would stop his dad, who fell ill at work in August and initially thought he was having stomach problems. However, doctors were examining him when he lost all the feeling in his lower body from a condition that affects blood vessels on his spine. Surgery saved his life, and Josh left the Indians to be with his dad following the operation.

As his dad recovered, Josh kept pitching but his mind was never far from thinking about family.

"He's called me a couple times. Never complaining," Jerry said. "I told him just go back to work and do what you do. Quit worrying about your dad and go get 'em."

Josh did just that.