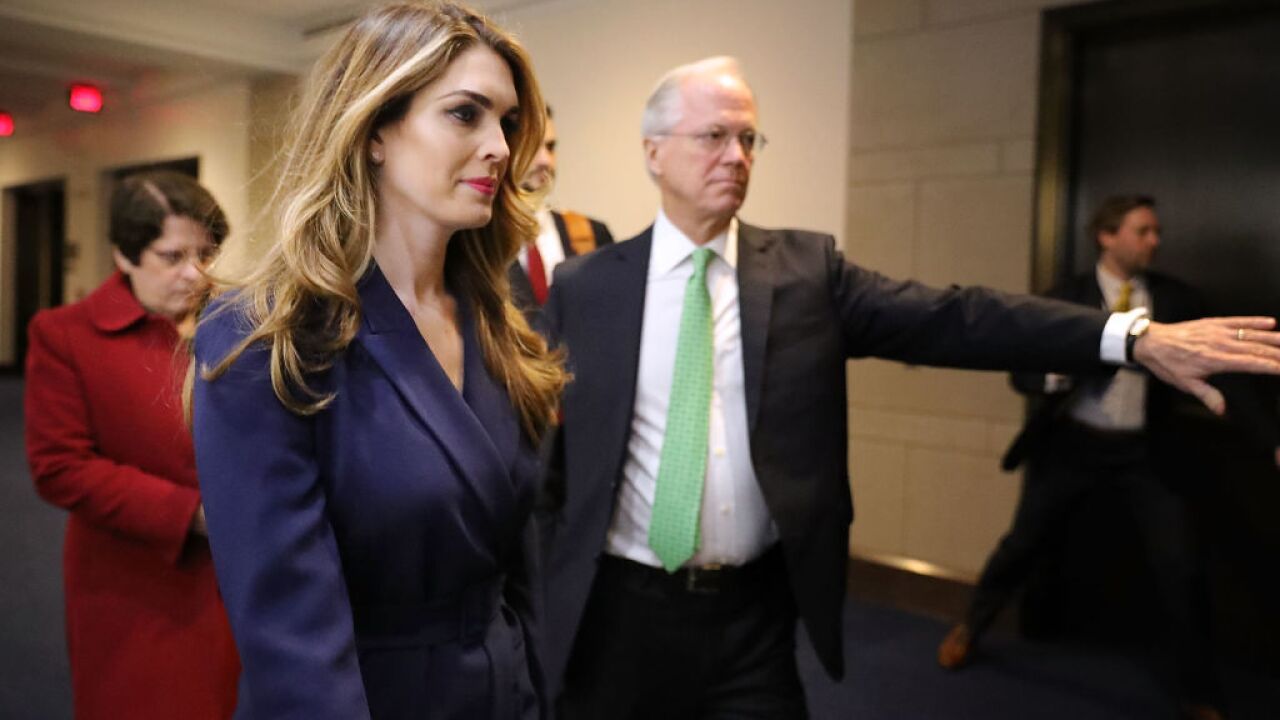 Former White House communications director Hope Hicks is not responding to any questions about her time at the White House in a closed-door congressional interview Wednesday, angering Democrats who say they expect to go to court to force her to answer their questions.

White House attorneys are objecting to all questions related to the White House, Democrats say, all the way down to where Hicks sat in the West Wing. But Hicks is answering questions about her time on the Trump campaign, which is not covered by executive privilege.

The White House is not asserting executive privilege, but arguing that Hicks has absolute immunity from testifying as a senior adviser to President Donald Trump. Democrats called that legal claim "ridiculous" and "absurd" as they signaled they will likely challenge it in court.

"There is no such thing as absolute immunity that prevents someone from answering questions about any subject related to their work in an administration. It just doesn't exist," said Rep. David Cicilline, a Rhode Island Democrat. "This is an ongoing effort by the president of the United States to obstruct, to prevent Congress from finding the facts and behaving as if he's above the law."

House Judiciary Chairman Jerry Nadler told reporters as he exited the interview, which is still ongoing, that she was answering some questions.

"Ms. Hicks is answering questions put to her and the interview continues," the New York Democrat said. He declined to say what his next steps would be.

Although many questions from Democrats were not answered, Hicks did provide some responses, such as when she was asked about her House Intelligence Committee testimony from 2018 in which she said that she sometimes told white lies on behalf of the President.

Under Democratic questioning, Hicks told the panel that she never lied about anything "substantial," according to multiple sources. Hicks said that the lies were about small matters such as scheduling, which was similar to her previous testimony.

Hicks' appearance is the first time a member of Trump's inner circle is appearing before a Democratic committee investigating the President, which comes as Nadler's committee wrestles with whether to begin an impeachment inquiry.

"The Dems are very unhappy with the Mueller Report, so after almost 3 years, they want a Redo, or Do Over. This is extreme Presidential Harassment," Trump tweeted. "They gave Crooked Hillary's people complete Immunity, yet now they bring back Hope Hicks."

Republicans criticized Democrats for trying to interview Hicks in the first place. Georgia Rep. Doug Collins, the ranking Republican on the committee, called Hicks' appearance merely an attempt from Democrats to generate a "press release." And Rep. Steve Chabot, an Ohio Republican, called the interview a "total waste of time" as he left the room.

The White House's objections to Democrats' questions were expected, as White House Counsel Pat Cipollone sent the House panel a letter Tuesday evening arguing that Hicks was immune from testifying about her time at the White House as one of the President's senior advisers, citing executive privilege protections.

"Because of this constitutional immunity, and in order to protect the prerogatives of the Office of President, the President has directed Ms. Hicks not to answer questions before the Committee relating to the time of her services as a senior adviser to the President," Cipollone wrote.

The White House's stance means that Nadler, a Democrat from New York, could end up in court to try to enforce the subpoena of Hicks, just as the committee says it will do to compel the testimony of former White House Counsel Don McGahn.

"If she doesn't testify, then Jerry Nadler will, I assume, unleash the full power of the House Judiciary Committee and the United States House of Representatives that could include, but is not limited to, contempt," said Rep. Hakeem Jeffries of New York, the Democratic caucus chairman, who sits on the Judiciary Committee.

But Democrats plan to ask Hicks about more than just her time at the White House. Judiciary Committee aides said they also intend to ask one of Trump's longest-serving campaign aides about her knowledge of the payments that were made during the 2016 campaign to silence women alleging affairs with Trump.

The decision to focus on the hush-money payments underscores that the committee is broadening the focus of its probe into the President -- which Nadler has said the panel is undertaking before a decision is made on impeachment, to go beyond the episodes outlined in the Mueller report.

Still, the committee is eager to speak to Hicks about her time at the White House. Committee aides said there were five episodes Mueller documented that they wanted to press Hicks about, including the firing of then-national security adviser Michael Flynn, the firing of then-FBI Director James Comey, former Attorney General Jeff Sessions' recusal from the Mueller probe and Trump's efforts to dismiss Mueller from overseeing the probe and to curtail the special counsel's investigation.

The committee plans to release a transcript of Hicks' interview afterward, potentially within 48 hours. The Judiciary Committee wants to bring in witnesses to talk about the Mueller report publicly, but so far it has held only open hearings with experts.

"I hope eventually she and all witnesses will be in the public," said Rep. Madeleine Dean, a Pennsylvania Democrat on the committee. "It's our job. I really believe it's our job to get the facts before the American public. ... The best, most effective way to do our oversight is to make sure it's in the public."

Also looming: whether the committee will interview Mueller himself publicly -- and if it will need a subpoena to do so. Nadler declined to comment on those negotiations Tuesday.

Republicans argued that Hicks' interview is proof that Democrats' claims of White House stonewalling are overblown.

"Judiciary Democrats have been their own barrier to information by choosing to escalate instead of negotiate at every turn," said Rep. Doug Collins of Georgia, the top Republican on the Judiciary panel. "The White House has offered to negotiate with Democrats for documents that Ms. Hicks can't provide, and the committee could probably have heard from her earlier if Democrats didn't take a scorched-earth approach to pursuing information."

Democrats have argued that Hicks cannot claim executive privilege when she spoke to the special counsel's office about the same topics, but the Trump administration has countered that being interviewed in an executive branch investigation does not waive privilege for a legislative branch probe. That question is also one that's likely to end up in court for a number of witnesses the panel is seeking to interview.

One potential point of contention is the presidential transition before Trump took office. Although Democrats -- and some Republicans, like former Rep. Trey Gowdy of South Carolina -- have argued that executive privilege does not apply to the transition, Cipollone argued in his letter Tuesday that Hicks' transition work would likely be privileged because it involved decisions that would be made after Trump was inaugurated.